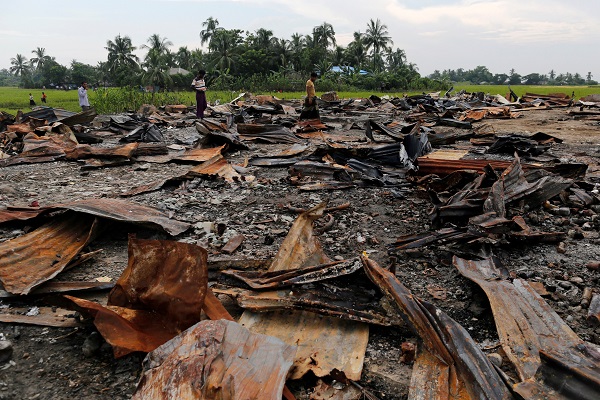 The ruins of a market which was set on fire are seen at a Rohingya village outside Maugndaw in Rakhine state, Myanmar October 27, 2016. REUTERS/Soe Zeya Tun

Malaysian officials say they are prepared to talk with their counterparts in Myanmar to find a resolution to end alleged human rights abuses against ethnic Rohingya Muslims in Rakhine state.

A statement from Malaysia’s Ministry of Foreign Affairs said Foreign Minister Anifah Aman is prepared to meet with Myanmar’s State Counselor and Nobel Peace Prize laureate Aung San Suu Kyi to determine how the Muslim-majority country can assist Myanmar to end the violence.

Myanmar has called for members of the Association of Southeast Asian Nations (ASEAN) to participate in a retreat in Yangon Monday to discuss recent developments in the country, including in Rakhine state.

“We welcome this positive development,” the Malaysian ministry said.

“On the claim that Malaysia’s recent actions are ‘un-ASEAN-like’ and may jeopardize any further possibility of Malaysia playing a credible role toward a long-term solution in Rakhine state, the Ministry believes that it is due to Malaysia’s vocal position on the issue that Myanmar will host an ASEAN Foreign Ministers’ retreat,” the ministry said in its statement.

BenarNews efforts to contact officials in Indonesia and Thailand to ask if they planned to attend were unsuccessful.

At least 86 people have been killed and about 30,000 displaced in an army crackdown in the Rakhine state since October. More than 20,000 Rohingya have fled the area to neighboring Bangladesh where they have accused Myanmar soldiers of killing civilians, raping women and girls and burning down their homes.

Malaysian Prime Minister Najib Razak led a Dec. 4 rally in the capital Kuala Lumpur during which he condemned violence against Rohingya Muslims as genocide and urged other Asian nations to increase pressure on Myanmar to stop the violence.

Malaysia on Thursday again defended Najib’s position, saying if not addressed urgently the ongoing violence would impact the region’s security and stability and would no longer be an “internal affair.”

“ASEAN member states as a community of nations has a responsibility to promote and protect human rights and fundamental freedoms of people in accordance with the ASEAN Charter and the Charter of the United Nations, as well as the ASEAN Human Rights Declaration,” the foreign ministry said in its statement.

“The exodus of more refugees to neighboring countries, including Malaysia, would witness a repeat of the 2015 boat people crisis,” it said, referring to a crackdown on human trafficking in Thailand that led to the sudden arrival of thousands of migrants in Malaysia and Indonesia in May of that year.

Meanwhile, Institute for Democracy and Economic Affairs Chief Executive Wan Saiful Wan Jan told BenarNews, an RFA-affiliated online news service, it is crucial for all ASEAN countries to be on the same page to solve the crisis although the “Myanmar government will defend its actions.

“It is absurd if the Myanmar government said there is no problem when everybody said there is,” Wan Saiful said.

Asrul Hadi Abdullah Sani, an analyst with Bower Group Asia, said Myanmar needs a long-term solution that addresses the historical conflict and the plight of the Rohingyas, who were stripped of their rights as citizens of Myanmar in 1982.

“It is a good start, but don’t expect drastic results from a single retreat,” he told BenarNews.

Rohingya Society in Malaysia president Faisal Islam said Yangon would use the retreat as a platform to explain to the world that “all is good” in Rakhine state.

“I don’t have confidence in the meeting. The government will also paint a negative picture about Rohingya,” he said.

“ASEAN leaders should not just take it all in and keep quiet. They should pressure the government to address the issue.

“It has been going on for 20 years. Pressure the government to give us the basic human rights, the rights of movement, to education, to health care,” he said.