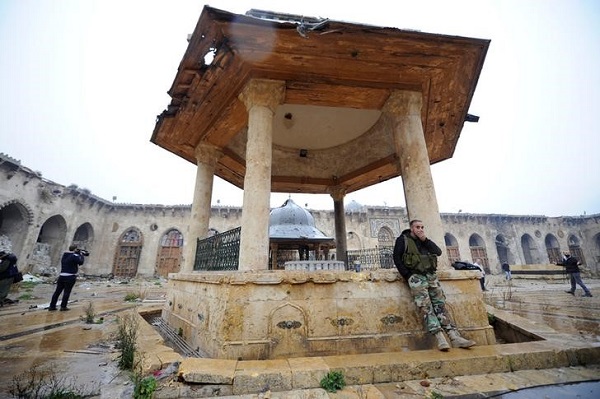 Forces loyal to Syria's President Bashar al-Assad stand inside the Umayyad mosque, in the government-controlled area of Aleppo, during a media tour, Syria December 13, 2016. REUTERS/Omar Sanadiki

Heavy fighting resumed Wednesday in Aleppo, Syria, as various parties and their backers traded blame for shattering a cease-fire, while a plan to evacuate civilians and rebels was delayed.

The Syrian Observatory for Human Rights said the violence included airstrikes on the remaining parts of opposition-held Aleppo, which the rebels seized four years ago. Rebel areas were also hit by shelling, while Syrian state television reported that shelling by the rebels killed six people in a district that was recently recaptured by the government.

Russia blamed the rebels for breaking the truce agreed to on Tuesday, saying they attacked Syrian government positions. Turkish President Recep Tayyip Erdogan said it was government forces who attacked first. Erdogan and Russian President Vladimir Putin were due to discuss the situation in Aleppo sometime Wednesday.

Russia, which backs Syrian President Bashar al-Assad, and Turkey, which supports rebels who want to oust him, brokered the deal, which also set up the evacuations that were expected to begin early Wednesday morning.

By midday Wednesday, the fighting had resumed and none of the evacuations had taken place.

Aleppo has been the subject of numerous efforts to bring a halt in fighting and to get aid to thousands of people in need of food and medicine. But repeatedly those initiatives, including brokered cease-fires by countries such as Russia, the United States and Turkey, have fallen apart.

The plan, according to Russia’s U.N. ambassador, Vitaly Churkin, was for most of the fleeing opposition fighters to move to Idlib, a city of 165,000 residents 60 kilometers southwest of Aleppo.

Churkin described the deal as the end of a “very difficult chapter” for Aleppo, and said his government hoped it would lead to the “relaunching [of] political negotiations.”

Turkey’s deputy prime minister, Mehmet Simsek, said on Twitter his country would set up a tent city to accommodate as many as 80,000 refugees fleeing Aleppo.

In comments to reporters in New York, he called for immediate U.N. access to eastern Aleppo to confirm the deal and to oversee the evacuation of civilians.

He also estimated that as many as 50,000 civilians remained late Tuesday in small pockets of eastern Aleppo, along with as many as 1,500 rebel fighters. Citing unconfirmed field reports, he said as many as 30 percent of the remaining fighters have been identified as jihadists with links to al-Qaida and other extremist groups.

“We remind all parties of their obligations under international humanitarian law to prioritize the safe passage of civilians out of eastern Aleppo and to ensure that those who have surrendered or been captured are treated humanely and in line with international law,” Ban told council members.

At an emergency council session Tuesday, Western envoys fiercely criticized Russia for its ongoing military support of the government of President Bashar al-Assad and the months of atrocities inflicted on residents of the once-vibrant city.

“Are you truly incapable of shame? Is there literally nothing that can shame you?” U.S. Ambassador Samantha Power asked. “Is there no act of barbarism against civilians, no execution of a child that gets under your skin, that just creeps you out a little bit? Is there nothing you will not lie about or justify?”

“It’s failed because Russia has used and abused its veto time and again, even to prevent a seven-day cease-fire,” Rycroft said.

He went on to equate the reports to the “spread of fake news,” saying people fabricating such reports stoop to covering war zone children “with dust to be presented as victims of bombings.”

Earlier, in Geneva, U.N. human rights spokesman Rupert Colville called on Syria to allow U.N. monitors or another organization such as the International Committee of the Red Cross immediate access to Aleppo.

“Civilians have paid a brutal price during this conflict, and we’re filled with the deepest foreboding for those who remain in this last hellish corner of opposition-held eastern Aleppo,” he said.

Separately, the ICRC warned Tuesday that thousands of civilians in eastern Aleppo “have literally nowhere safe to run” and urged those involved in fighting there to protect them.

Once complete, the recapture of eastern Aleppo would end four years of fighting between a loose alliance of rebel factions and the Syrian army, which is backed by Shi’ite Hezbollah fighters, Russian forces and Shi’ite militia supported by Iran.

A year-long government offensive intensified in September, when Assad’s forces were bolstered by Russian air power. Monitors described the Russian air war on Aleppo’s eastern sector as methodical and said entire neighborhoods were flattened street-by-street under the onslaught.

Rebel commanders and opposition politicians insist the loss of Aleppo will not mark the end of the uprising.

However, few doubt battlefield fortunes have swung heavily against them and with the regime possibly hours away from seizing what is left of insurgent controlled eastern Aleppo, the dynamic of resistance will have to change to guerrilla warfare to keep the revolution alive.

Margaret Besheer and Jamie Dettmer contributed to this report.