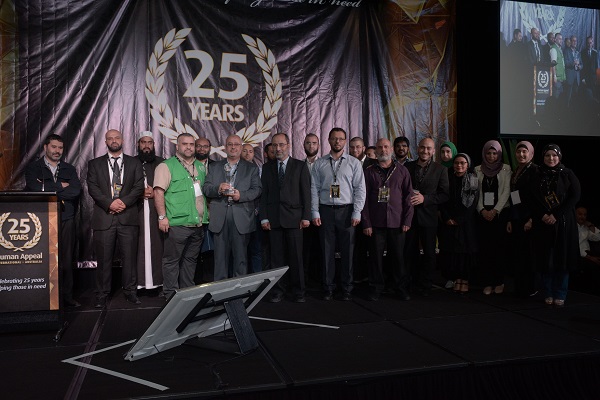 On Sunday the 27th of November, Human Appeal International Australia celebrated its 25th Anniversary in Sydney. The incredible milestone featured a Family Fun Day and Gala Dinner hosting a variety of local and international guest speakers and performances.

With an audience of over 2,100 in attendance at the Waterview in Sydney Olympic Park, the stage was enlivened with appearances by the likes of Yusuf Estes from the US, nasheed artists Khaled Siddiq from the UK and Abdulfattah Owainat from Jordan, with comedian Mo Amer also from the US delivering a hilarious stand-up comedy act.

There were two unique moments that stood out from the rest of the day’s events. Two orphan brothers from Jordan, Mohammad and Ibrahim Owaimer, sponsored by Human Appeal, performed a heart-wrenching song about having a father figure in their lives. This was followed by an interview with another orphan from Sudan, the self-confident Asaor Adam. Emotions were running high as she explained her journey and how the ongoing support from Human Appeal has allowed her to start university doing a Bachelor of Medicine. An unexpected surprise occurred when she met her sponsor’s daughter, who pledged to pay all of her university expenses, leaving many of the audience in tears.

People from across Australia came to attend the anniversary with guests travelling from Brisbane, Adelaide, Melbourne and Dubbo keen to witness and celebrate the momentous achievements of Human Appeal Australia. The Grand Mufti of Australia, Dr Ibrahim Abu Mohammed, local Imams, politicians, community leaders and school principals were also in attendance to express their appreciation for the many years of service provided to the community and those in need.

Guests had the opportunity to walk through a photo exhibition which displayed the many projects and campaigns that Human Appeal has coordinated in more than 29 countries for a quarter of a century. With the beautiful sunny weather, people enjoyed picnics, the scenery by the lake as well as a free sausage sizzle. Henna and face painting plus Arabic calligraphy were also offered free-of-charge as a token of Human Appeal’s gratitude to the community for its ongoing support in helping to raise a staggering $126 million dollars in donations since its establishment in 1991. This could not have been possible without the trust and confidence of a generous community eager to help millions of disadvantaged people around the world.

The anniversary marked the beginning of a new chapter in the history of Human Appeal with its Director, Bashar Al-Jamal vowing: “We will ensure that this charity continues to work more innovatively and efficiently with the community to help the deprived people of the world — dedicated to our motto of ‘always with you on the road to goodness’.”