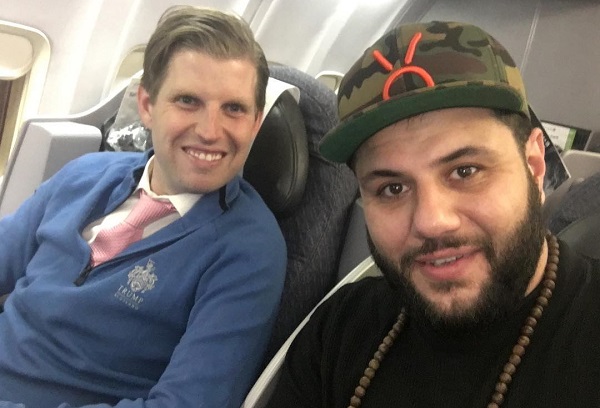 "Hey guys heading to Scotland to start the U.K. Tour and I am "randomly" chosen to sit next to non other than Eric Trump. Good news guys Muslims will not have to check in and get IDs. That's what I was told." said comedian Mo Amer on Instagram.

Comedian Mo Amer was glad of his upgrade when it pinged on the board. His tiredness – he had only just arrived back from Australia, and was heading from the US to Scotland – slipped away as he thought of the first-class sleep he would get.

But when he got to the front of the jet bridge, there was a strange atmosphere.

“You know when there’s a celebrity on the flight there’s a different energy on the plane,” Amer said. “I walked to my seat and I could see the lady behind me looked perturbed by something.”

He followed her eyes to the seat next to his, where he saw the famous man, unmistakable, wearing a blue sweater emblazoned with his family crest. “I’m like: are you kidding? Eric Trump?”

Amer was born in Kuwait to Palestinian parents, and came to America as an asylum-seeker after the first Gulf War and became a US citizen in 2009. He saw his assignment as a golden opportunity, both as a Muslim, an American and a comedian.

“I put my bags up, I sat down, introduced myself as Mohammed,” Amer told the Guardian. Then he got straight to the point. “I said: ‘I’m a Muslim. I’m not gonna do that Muslim ID thing. That’s not gonna fly.’”

Eric Trump’s response was not exactly on-message with his father’s campaign. “His exact words were: ‘come on, man, don’t believe everything you read, we’re not going to do that’,” Amer said. Representatives for president-elect Trump did not respond to a request for clarification on the policy, or Trump’s past suggestion of a registry of Muslims.

Eric Trump was on his way to their golf course, Turnberry, in Scotland, for a 24-hour visit; Amer was on his way to take part in The Human Appeal Charity Comedy Tour. As the conversation progressed, the comedian found his seat-mate quite amiable.

In a very friendly 45-minute chat, they bonded over mutual appreciation for Dave Chappelle sketches – Amer has opened for Chappelle on stage – and Trump complained about the difficulties of having to travel with the secret service in tow.

Trump asked Amer, as a comedian, to “take it easy, take it easy on us”. Amer said sorry, but no. “I was like, part of what we do as comedians, we observe the world and talk about its absurdities.”

The conversation, however, returned inevitably to politics. “I told him: I knew you were going to win. Your father played the game so well, he played the media like a fiddle. He just nodded yes. He mentioned his dad was a good man and what-have-you – but it’s not going to change my views.”

Amer doubts that he changed Trump’s mind either. “I hope [I did], on some level … but do I think it happened? Probably not. But it doesn’t hurt to have a civil conversation with someone you rarely interact with.”

“I see the whole thing [politics] as a game,” Amer said. “I know it’s just chess pieces moving. That doesn’t mean I feel nothing, like it doesn’t affect me [and] my family.” His wife, he said, is Mexican-American, a navy grad, born in Key West, Florida.

Nonetheless, in his chat with Eric Trump, Amer kept things very friendly. “I think it was important for me to sit there and put aside my feelings about the situation and truly, truly be present in that moment and have a conversation,” he said. “Because people fear what they don’t know.”