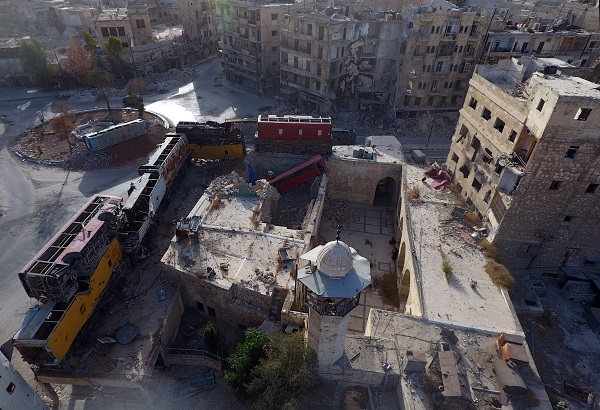 A view taken with a drone shows damaged buses positioned as barricades in the rebel-held Bab al-Hadid neighborhood of Aleppo, Syria. REUTERS/Abdalrhman Ismail

Britain and France called for the session, which Russia’s U.N. Ambassador Vitaly Churkin criticized as a “propaganda campaign.”

It follows a dire prediction Tuesday from U.N. envoy for Syria Staffan de Mistura as fighting in Aleppo continued to intensify and more civilians tried to escape.

“Clearly, I cannot deny: This is a military acceleration and I can’t tell you how long eastern Aleppo will last,” de Mistura said during remarks to the European Parliament. “There is a constant increase of movement on the military side.”

The Britain-based Syrian Observatory for Human Rights reported that more than 50,000 people fled eastern Aleppo in the past four days.

Activists said a new round of shelling Wednesday in eastern Aleppo killed at least 21 in an area where people who had fled other parts of the city were seeking refuge. In the government-held part of the city, the state-run SANA news agency reported shelling killed eight people.

“The regime and their supporters have decided to accelerate their barbaric military strategy against their own population to retake eastern Aleppo, whatever the cost in terms of human lives,” French U.N. Ambassador Francois Delattre told reporters. “In these tragic circumstances, France and its partners cannot remain silent in the face of what could be one of the biggest massacres of civilian populations since WWII.”

“The only way Aleppo can be saved and the conflict in Syria can end is if the regime and backers — by which I mean Russia and Iran, above all — change their policy,” he said. “The future of Aleppo is in the hands of the [Syrian] regime and Russia. We urge regime and Russia to stop the bombing, let aid through, call a cease-fire and eventually to get political talks back on track.”

While east Aleppo has been under government siege for more than four months, the army began heavily bombarding the city two weeks ago and on Monday night took control of a key district.

“It’s a fight to take the city back,” Russia’s Churkin told reporters.

“It was an untenable situation which could not exist indefinitely,” he said of shelling from eastern Aleppo into the city’s western side. “It was impossible to maintain the situation indefinitely. Now, I suppose, it is leaning in the direction of the government taking back the control of the whole of the city.”

Tuesday, the Britain-based Syrian Observatory for Human Rights said at least 10 civilians had been killed in an airstrike in Bab al-Nairab, one of the eastern districts still held by rebel forces.

Activists and Syrian state media said Monday that government forces had scored a series of victories over opposition fighters in the eastern part of Aleppo, as part of an apparent strategy to split the rebel-held section of the city in two.

Aleppo has been a major focus of Syrian military efforts with the backing of Russian airstrikes. The situation there has also raised international concerns, with an estimated 250,000 civilians trapped in a government siege and in need of food and medical aid.

In Washington, the State Department expressed its “deep outrage” at the latest bombing of Aleppo, holding Moscow responsible.

“What we’ve continued to assert is that Russia bears the ultimate responsibility here for what the Syria regime is doing and being permitted to do in terms of the devastating civilian casualties and destruction of civilian infrastructure to include hospitals in and around Aleppo,” spokesman John Kirby said Monday.

Kirby said a multilateral diplomatic effort was still going on in Geneva to discuss ways to get at “a framework for a cessation of hostilities.”

SANA cited a military source saying the army had recaptured the al-Sakhour district and dismantled mines left there by “terrorists,” a term the government uses to refer to anyone opposed to President Bashar al-Assad.

The Syrian Observatory for Human Rights also reported that the military was fully in control of al-Sakhour and several other districts.

Observatory director Rami Abdulrahman called the defeat the worst for the rebels since they seized half of Aleppo in 2012, and said the opposition has now lost one-third of the territory it once held in the city.

‘Aleppo is going to die’

Khaled Khatib, who works for the volunteer rescue group known as the White Helmets, described the situation in eastern Aleppo as “very, very bad.”

“Thousands of eastern residents are moving to the western side of the city,” he wrote on Twitter. “Aleppo is going to die.”

U.N Ambassador Samantha Power of the United States held up the airstrikes as proof “that the [Syrian] regime and Russia are continuing their ‘starve, get bombed or surrender’ strategy in eastern Aleppo.”

Her comments to the General Assembly last week were part of a stinging critique of Russian and Syrian actions in eastern Aleppo, which intensified in September when Russian warplanes joined the bombing campaign.

Moscow and Damascus have routinely described the fight against rebels in eastern Aleppo as a battle against terrorists, despite the sector’s vast civilian population. Both governments have used the “terrorist” characterization to justify the deadly and apparently indiscriminate bombings in the sector.