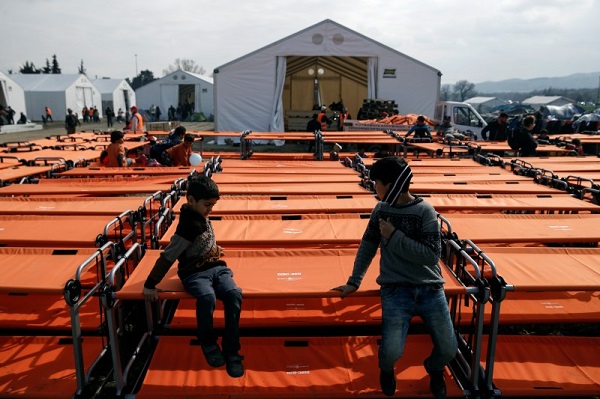 Children sit on folding bunk beds outside a newly set tent, at a makeshift camp for refugees and migrants at the Greek-Macedonian border near the village of Idomeni, Greece, March 18, 2016. REUTERS/Alkis Konstantinidis

The Turkish government has a secret plan to allow 3,000 refugees to sail to Greece every day, intelligence officials have claimed, according to The Independent.

Greek analysts claim thousands of dinghies and motorboats have massed along the Turkish coast as the refugee deal agreed between Ankara and Brussels looks set to unravel.

Turkish President Recep Tayyip Erdogan threatened to open the borders if the EU continued to block talks on the country’s accession to the union.

The European Parliament voted to temporarily halt membership talks amid concerns about the brutal crackdown on dissent in the country following an attempted military coup in July.

Erdogan warned: “If you go any further, these border gates will be opened. Neither me nor my people will be affected by these dry threats. It wouldn’t matter if all of you approved the vote”.

The deal reached in March meant any refugee who arrived on Italian or Greek shores would be sent back to Turkey in exchange for EU member countries accepting another refugee from a Turkish camp on a “one for one” basis.

Ankara will also received aid money to help it care for the refugees within its borders, visa free travel for its citizens and the speeding up of membership talks.

But according to Greek newspaper Proto Thema, Ankara has given up on hope of Brussels living up to its side of the deal and could start allowing the refugees to flee “within a matter of weeks”.