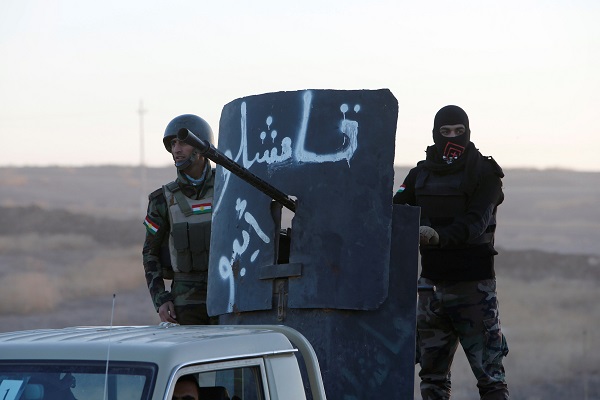 Iraq’s sectarian political leaders have plunged back into a dispute over the status of Shi’ite armed groups, undermining efforts to reunite the country as its troops press on with the assault of Mosul, ISIS’ biggest stronghold, Reuters said.

Forty days into the biggest ground offensive in Iraq since the U.S.-led invasion of 2003, about a quarter of the city has been taken by U.S.-backed government units on the eastern side. The western part could prove far more dangerous, Major General Najm al-Jubbouri, one of the army’s top commanders, told Reuters.

Residents still wearing the long beards demanded by ISIS welcomed Iraqi troops into a neighborhood of east Mosul with coffee, cheers and kisses after the fighters left.

“Today we have been released from prison,” said a resident, Ahmed Zeidan Mahmoud. “We were imprisoned. No water, no electricity, there was nothing.”

On the wall of a kindergarten, the faces of two girls were blotted out by militants who consider it un Islamic to depict people. Nearby, a dog was eating the corpse of a militant.

The slow progress was overshadowed by the sectarian political quarrel that erupted in Baghdad on Saturday, November 26 when Shi’ite lawmakers forced a law through parliament legalizing the mainly Iranian-backed paramilitary units known as Popular Mobilisation forces.

Many Sunnis consider the paramilitaries to be sectarian militia and accuse them of having carried out abuses in Sunni areas recaptured from ISIS. The Popular Mobilisation units deny having sectarian aims or committing widespread abuse and say they saved the nation when the army crumbled in the face of ISIS’ lightning advance two years ago.

Sunni members of parliament boycotted the session held on Saturday, objecting to the existence of armed groups outside the army and the police, and worrying that Popular Mobilisation will enhance Shi’ite majority rule and Iran’s regional influence.

The dispute threatens to complicate efforts to pull the country back together and foster reconciliation when Mosul is captured, which would mark the effective defeat of ISIS in Iraq.

The Iraqi military estimates there are 5,000 to 6,000‮‮ ‬‬insurgents in Mosul facing a 100,000-strong force made up of Iraqi government troops, Kurdish Peshmerga fighters and Shi’ite Popular Mobilisation units.