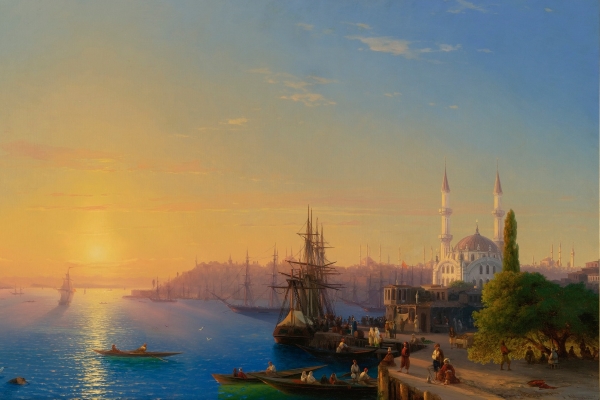 Again, I must say that people deliberately promote Islamophobia, the unfounded fear of Islam, in our day. The truth is the exact opposite… Islam is a mercy, and a form of compassion. Allah Almighty’s revealed Names – the All-Merciful and the All-Compassionate are the most invoked. When we look at the 23 year Prophethood of the Messenger of Allah (Allah’s peace be upon him) we see that the deserts that had then become a bloodbath found peace. People found peace. Slaves found peace.

A slave by the name of Yazid said:

“On the return from Badr, there were such instances where the Muslims walked beside us while mounting us on their camels.”

The Messenger of Allah (Allah’s peace be upon him) states:

“So feed them with what you eat, give them to drink of what you drink, and even more than that. Liberate them.”

Slaves were freed from enslavement. Poor, wealthy, post, position, etc. all of this came to naught. All of them began to stand side by side for the prayer. They all became fellow sufferers, sharing each other’s grief. Islam rendered all of them in need of each other:

“The first and foremost (to embrace Islam and excel others in virtue) among the Emigrants…” He informs us of the Meccans. Like those Meccans… They did not make concessions when it came to their belief. They endured every kind of suffering. Embargoes were imposed against them. They were banned from neighbourhoods at the city’s entry points. The children’s cries of hunger could be heard from other neighbourhoods.

The Messenger of Allah (Allah’s peace be upon him) went to Ta’if and was stoned. The Companions exerted utmost effort to protect their belief, their belief in Allah’s Oneness and Unity. That is why Allah Almighty declares:

“The first and foremost (to embrace Islam and excel others in virtue) among the Emigrants…” He wants us to be like them. We are to be a model, an example. We will be an example for all humanity.

“”…that you may be witnesses for the people (as to the ways they follow), and that the (most noble) Messenger may be a witness for you.” (See 2:143)

He then states, “…and the Helpers.” He wants us to be like the Medinan natives. To every Qur’anic verse that was revealed they responded with the words, samiʿ’nā wa-aṭaʿnā, “We have heard and obeyed…” (See 2:285) They immediately set about putting each one of these into practice. Alcohol consumption stopped and interest ended.

The verse on modest dress was revealed. All women, in an instant, covered themselves with whatever cloth was available in their homes and this is how they left their houses.

The Children of Israel on one side, the hypocrites on another and the Meccan polytheists on yet another… These verses of legal import were put into practice under the clutches of these three forces. Allah Almighty wants us to be just like them.

“…and those who follow them in devotion to doing good, aware that Allah is seeing them…” it is declared. And Allah Almighty gives them and honours them with the glad tidings of Paradise.

Animals were persecuted also. Their leg would be cut, the camel’s hump would be cut, where the fat was, and the animal would be left in such a state.

A person was once sharpening their knife in the presence of the Messenger of Allah (Allah’s peace be upon him), upon him be peace and blessings.

Allah’s Messenger said, “How many times are you to kill this animal? Can you not sharpen your blade out of its sight?”   (Hakim, IV, 257)

“Even when killing the snake that attacks you, kill it in a single strike, do not torment it.”

The Messenger of Allah (Allah’s peace be upon him) once saw a burnt ant’s nest and his face changed colour.

Plant life found peace. A Bedouin was shaking the leaves (off a tree) to feed his animals. He called the Bedouin and asked,

In short, the believer is to be a representative of the Messenger of Allah (Allah’s peace be upon him), upon him be peace and blessings, in every way.

When Islam was put into practice, Allah Almighty sent His aid. The Messenger of Allah (Allah’s peace be upon him) says:

The Umayyads came and fell prey to nepotism. From time to time, those who came to power fell prey to wealth and possessions. They sometimes fell prey to harem life.

“How many pages, how much have you read today? What have we done, what kind of service shall we perform today? How did we spend our night?”

They began to question themselves. An introspection and self-criticism began.

Allah Almighty bestowed such a state of serenity that the Muslims advanced all the way to Spain. Governors wrote letters to ‘Umar ibn ‘Abd al-‘Aziz, saying:

“Our alms-tax has accumulated and there are no people in need who are left to receive it. What shall we do with these taxes?”

What kind of society was established?

Iyyāka naʿbudu “You alone do We worship…” (1:5) This is what there was. There was servitude to Allah.

Wa-iyyāka nastaʿīn “and from You alone do we seek help.”(1:5)

The Umayyads continued for 300 years. Thereafter, they too fought against one another. They took the non-Muslims as their friends. They came tumbling down also.

There was a massacre against the Muslims. They gave human heads to the pirates in certain numbers, to take to North Africa. Pirates took 300,000 Muslims, took them away from shore, where they buried them in the Mediterranean, only to then return. Why? iyyāka naʿbudu was no more. Being a servant to Allah was no more. A desire for the world came. Allah’s help was cut off. There was no more manifestation of mercy.

The Abbasids were established. And this continued for 250-odd years.

A Baghdad civilisation emerged. But again, a desire for the world began. And to them Allah Almighty sent Hulagu Khan (the grandson of Genghis Khan), a calamitous person. He slaughtered 400,000 Muslims and threw them into the Tigris.

All works painstakingly written by hand were thrown into the Tigris. An entire culture was destroyed. Some of the Tigris flowed as blood, while some flowed as ink.

Why? iyyāka naʿbudu was no more and servanthood to Allah was no more. The emanation of mercy ceased. Hearts became filled with the world and rusted away. Allah’s help stopped coming.

The smallest tribe was the Ottoman tribe. It never entered into any conflict. There was a state of peace and tranquillity. All the friends of Allah, the scholars and the jurists gathered there and found peace.

It began with reverence for the Qur’an, it began with respect for the Qur’an. Osman Gazi refused to lie down in a room where there was a Qur’an, instead staying awake the whole night. The Edebali spiritual chain continued for three centuries. Right up until the Tulip Period. The map became 24 million (square) kilometres. 30 times Turkey’s size today.

Everything changed after the Tulip Period. Spiritual life dissipated, a carnal, worldly existence increased. Extravagance began, splendour began, show began. Allah Almighty began to take back one by one.

This goes to show that when hearts forever exude with mercy, this is when the mercy of Allah Almighty descends.

God willing, today, we are all each a representative of Islam. Allah Almighty will inshallah grant great relief to hearts and spirits through you, and a peace to humanity by means of you.

The Messenger of Allah (Allah’s peace be upon him) was concerned with raising a generation. ‘A’isha relates:

It was close to the demise of Allah’s Messenger. The Call to Prayer was recited and the Companions waited for Allah’s Messenger (to lead the prayer). The Messenger of Allah (Allah’s peace be upon him) did not have strength enough to walk to his mosque, that is to the mihrab. These were his last moments. They came and said:

“O Messenger of Allah (Allah’s peace be upon him), the congregation refuses to stand for prayer before your arrival. They insist upon your presence.” Look at the degree of love…

Again, the love of Allah’s Messenger:

“Bring me a bucket of water,” he said. He had the bucket of water poured over him. They stood him up, but he had no strength to walk. Again he collapsed there and then.

A while later, he again requested another bucket of water. He had that poured over him as well, but still could not move and collapsed in his spot.

Soon after, again after some rest – the love that the Messenger of Allah (Allah’s peace be upon him) had: He again asked for a bucket of water. The water was poured over him. His uncle ‘Abbas took him by one arm and ‘Ali, may Allah be well pleased with them, by the other.

Holding him by one arm, ‘Abbas, may Allah be well pleased with him, led him all the way to the mosque’s mihrab. Holding him by his other arm were other Companions who took turns taking him, to receive the spiritual blessings therefrom.

But he was in no state to lead the prayer. He beckoned to Abu Bakr to do so. Abu Bakr led the prayer and he prayed behind him.

Mother of the Believers ‘A’isha says:

The final greeting was made to complete the prayer and he was suffering greatly. However, he turned around and looked at those seated behind him, seeing the fine congregation of the Companions, a generation exuding mercy. Overcome by such a state of illness, he smiled so beautifully that I have never seen him smile so before – leaving behind him such a generation.”

May Allah Almighty enable all of us to leave behind us a distinguished generation from our relatives and offspring, with our passage to the next world.

This is what the world is in need of today. Ahmet Taşgetiren aptly described the situation of the world. How an unquestioned, an irresponsible life continues, with the attitude, “Let them do it, let them pass.” There is a need for that ideal human being today.

Allow me to finish with a story of Mawlana Jalal al-Din al-Rumi. Rumi vividly illustrates in a story from his Mathnawi:

“I looked and saw it was night and darkness had descended. There was someone walking through the fields with a lamp in his hand. I went to him and said:

‘What are you doing in these fields in the dead of night, with a lamp in your hand?’

‘I am looking for a human being,’ the man answered.

‘Forget about it,’ I answered. ‘Do not weary yourself, for I have searched far and wide but could not find one. Do not fatigue yourself as I have.’

The man then turned to me and said poignantly:

‘I, too, know that I will not find one, but even the longing with which I seek gives me great delight. Let me be, so that I may wander with such longing.’”

And so… raising an ideal human being. Raising a competent and qualified human being. Being able to be a person whose heart exudes mercy. To raise a human being who overflows with mercy.

May Allah Almighty enable us all to do so. May our Lord bless our gathering. May He be well pleased with the friends who have organised this gathering.

We have gathered here for the sake of Allah. May Allah Almighty bestow upon us His favour and blessing. May Allah be well pleased with all of you.

For this, let us each recite al-Fatiha.