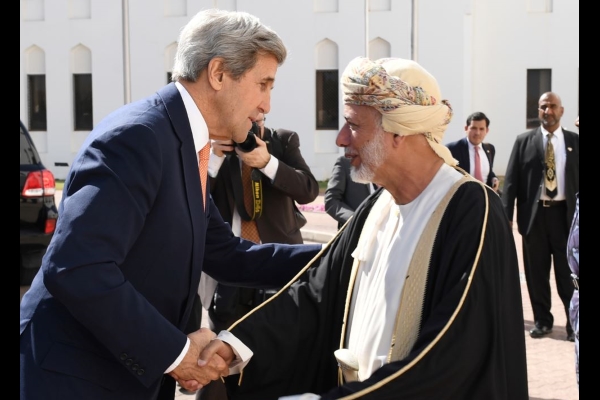 Kerry said he had a "very constructive discussion" with Yusuf bin Alawi, the minister responsible for foreign affairs, before also talking about the desperate situation in neighboring Yemen with Oman's Sultan Qaboos bin Said.

ABU DHABI – U.S. Secretary of State John Kerry says a cease-fire in Yemen could start as early as November 17, “provided that everybody does their part.”Yemen’s armed Houthi movement and a Saudi-led military alliance have agreed to support a solution for the conflict in Yemen based on the framework laid out to establish a new Yemeni national unity government by the end of the year.

An Omani road map, based on an initiative by Kerry, calls for Yemeni President Abdu Rabu Mansour Hadi to hand power to a less divisive deputy in exchange for the Houthis withdrawing from Yemen’s main cities.

Kerry spoke Tuesday at the end of a visit to the United Arab Emirates and said he is very hopeful the agreement will come together. He added the talks have “a potential to be a real turning point.”

The Yemeni government said on Tuesday that it was not interested in the cease-fire and unity government announcement.

Yemeni Foreign Minister Abdel-Malek al-Mekhlafi said on his Twitter page that his government was neither aware of nor interested in “what Secretary Kerry announced, which represents a desire to scuttle peace efforts by trying to reach an agreement with the Houthis apart from the government.”

“I don’t know that the regime of (Yemeni) President Hadi has any remaining political legitimacy or the capacity to govern, so any deal that is struck will need to address the issue of effective post-war governance,” Gregorian told VOA Tuesday.

He added the peace deal “is simply a short break for all stakeholders to catch their breath, and to allow for the international community to deliver much-needed humanitarian aid. The Houthis have gained a commanding position on the ground, and they are not likely to negotiate away their gains.”

Kerry also said he had a “very constructive discussion” with Yusuf bin Alawi, the minister responsible for foreign affairs, before also talking about the bloody and desperate situation in neighboring Yemen with Oman’s Sultan Qaboos bin Said.

The absolute monarch and Kerry discussed the importance of peace talks and getting a framework in place. In the past, neither side was willing to stop fighting.

The U.S. official said the Houthis agreed “for the first time publicly” to send representatives to a de-escalation and coordinating committee and to “accept the road map including the sequencing that is in the road map presented by the envoy as a basis for negotiations.”

The conflict in Yemen in the past 20 months has killed an estimated 10,000 people and millions are in need of food with starvation setting in, according to the United Nations.

The majority of Yemen’s 27 million people are also in urgent need of health services and the country is at risk for a significant cholera outbreak, say U.N. agencies.

“Thus far, the emirates and the Saudis I talked to…they have both agreed to move forward with this. They believe it makes sense,” Kerry added.