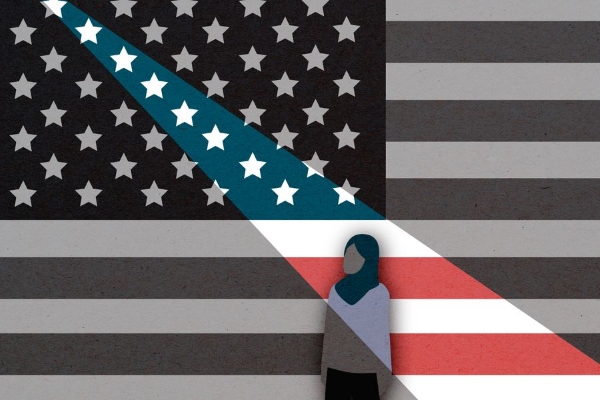 Call it the Islamophobia Election: One of the legacies of the 2016 race will be the next-level-mainstreaming of anti-Islam bigotry in America. From the start of the Republican primaries through the final days of the race, American Muslims have been a focus for aggressive rhetoric–and for policy proposals that would curtail their rights.

None of this, though, answers a question: what are many Americans talking about when they talk about Islam?

A revealing answer comes to us from a fascinating, throwaway line in a Guardian article published last August, when a voter named Keith, asked about Trump’s Muslim ban, protested that “You can’t just ban a certain race from coming into the country…It doesn’t work that way, especially as it’s the land of the free.”

Islam isn’t a racial group. But here in the United States of 2016, Muslims are often treated as if they’re part of a single, fundamental category, endowed with certain essential and inborn characteristics. That construction of Muslim-ness can seem closely related to the construction of racial categories.

Scholars call this process racialization. And while the term is contested, there’s certainly evidence that Muslim-ness in the United States is constructed as a kind of racial category, no matter how incoherent that construction may seem.

Hoping to understand this process better, The Cubit called up Saher Selod, a sociologist at Simmons College who studies the racialization of American Muslim communities. She spoke with RD about racial categorization, the surveillance state, and why Sikh men are so often confused for Muslims.

This conversation has been edited for length and clarity

Michael Schulson: The Muslim community is very diverse, in many different ways. Is there necessarily some biological component to race?

Saher Selod: Muslims are incredibly diverse in the United States. They’re white, they’re Arab, they’re South Asian, they’re African-American. It is not to say that Muslim has become a racial category. It’s just that a Muslim identity has been racialized. It has imposed newer racial meaning to these bodies of people who already occupy a specific racial category.

I think the strongest case is when a white convert—for example, a white woman who is born and raised in America—is considered white in the United States until she starts to wear the hijab. Then, all of a sudden, she stops being treated as if she’s white. The hijab somehow marks her as foreigner. My work tries to show how a religious identity intersects with one’s racial identity.

MS: What does discrimination look like that’s not racialization?

MS: So it’s about names, clothing, the presentation of the body—these hard-to-change markers.

SS: Religion was once used to place people into social hierarchies, before the concept of race was created. When I’m speaking of racialization, I’m speaking of somebody not knowing anything about somebody’s religious practices, but making assumptions about them based on the way that they present themselves.

MS: It’s revealing that Sikh men have been racialized as Muslims in the United States.

SS: You have this imaginary idea of who a Muslim is, and Sikhs are getting misrecognized as Muslims, based on physical traits.

MS: And these essential characteristics are treated as if they exist regardless of a person’s actions or beliefs.

SS: Edward Said wrote about Orientalism—people from the Muslim world were seen as incapable of being loyal to the West. We’re seeing a lot of themes come back up, such as that Muslims could at any point be radicalized in America, regardless of their status as a citizen, or what their beliefs are.

We see examples of this in certain policies that the government has put into place. It’s all based on this idea that there’s a constant potential for a Muslim to be a terrorist.

MS: What would the security state look like without that racialized component?

SS: If we look at the statistics and we look at the numbers, we have more mass shootings in this country than terrorist attacks. The majority of people committing these terrorist attacks are not Muslims. There need to be policies that take into account behavior and political motivation rather than religion or religious identity. Mass shootings are overwhelmingly committed by white men, yet we don’t say, “Well, we need to monitor white men in this country.”

MS: Are there other examples, besides Muslims, that can be help us understand the concept of racialization?

I don’t want it to be misunderstood that I’m saying that skin tone and pigmentation don’t matter in the United States. They obviously very much do. But there are other ways that people are racialized. For example, Latinos may be racialized based on language, and accents.

SS: It is very difficult because in the public’s imaginary—and even a lot of the scholarship—race is really about skin tone and pigmentation. That’s because we live in a society where we used to place people into a racial hierarchy based on physical characteristics like cranium size, skin tone, and hair texture.

Even when we affirm that there are no differences based on these things, it still seems to be very much in everybody’s consciousness that race is really about differences in pigmentation among people. This idea that we look at a religious group and say that this is somehow racism—I think that is a hard thing for people to understand, when in their minds they’ve understood racism to really be about this one specific thing.

I think it broadens the discussion about racism in the United States.

MS: How does the process of racialization vary along lines of gender?

SS: A lot of people tend to talk about race as if men and women experience racism in similar ways.

Muslim men and Muslim women don’t experience racialization in similar ways. Muslim men that I interviewed were on lists at airports. After 9/11, they would go to the airport to fly and all of sudden they couldn’t use the self check-in kiosk with their credit card.

Muslim women were subjected to racial profiling in different ways than Muslim men who were on these lists. It influenced their behavior.

MS: In what sense?

American Muslims are surveilled by the state. They’re surveilled by private citizens. Then they participate in self-surveillance as well. When you’re hyper-surveilled you monitor what you say and do to avoid bringing suspicion onto your body.

MS: How can a racialization lens help us understand the 2016 election?

SS: It’s very scary for Muslims right now. In the United States, we look to policies and examine—is there racial bias in these policies? Stop and frisk in the United States. Mass incarceration in the United States, where race is really the factor. I’m trying to argue the same thing, that targeting Muslims as terrorists in this country has been really problematic, rather than looking to the root causes that underly terrorism.

The scary thing is we don’t know what the trajectory could be for Muslims. Before 9/11, the idea that there could be more internment camps, or that we could really ban them from living…or have all Muslims wear ID badges—some people think it might be absurd, but I think it’s actually something that we really need to worry about, as we’ve seen what’s been going on politically with the rhetoric in this country.

MS: Watching someone like Trump give speeches, something that’s really struck me is the way in which, when he talks about Islam and Muslims, it’s easy for progressives to hear him saying something that’s an affront to conscience of religious liberty. But it’s not clear that he thinks of himself as talking about religion. Right? His rhetoric seem to be less about matters of conscience, and more about bodies.

SS: Yeah. After the Orlando shooting, Clinton gave a speech. And there’s this whole rhetoric around, “Well there are good Muslims in America. They’re not all bad. We want them to help us, and feel included, and welcome them because we want them to sort of be on our side and help to reduce the problem of terrorism. We need to work with the Muslim community.”

Then you have on the other side the Trump rhetoric, or the more conservative rhetoric, which is, “They’re inherently evil. They’re dangerous to society.”

On the right there is the essentializing of Muslims as potential terrorists and threats, and on the left, what you see is they’re still sort of being defined in that way as well. It’s just done in a more nuanced way. “There are good Muslims and there are bad Muslims, and we need to get the good Muslims on our side.”

MS: What’s the counter-rhetoric you would want to see?

SS: We need to talk about Muslims as we do about any other group. They can’t always just be defined, or understood, or discussed in terms of terrorism. We need to individualize people in this country instead of marking them as being a part of a broader community. Most people in this country don’t know much about Muslims, or Islam, or their practices. I think that’s a problem.

Michael Schulson is a freelance writer and an associate editor at Religion Dispatches, where he co-produces The Cubit, RD’s religion and science portal.