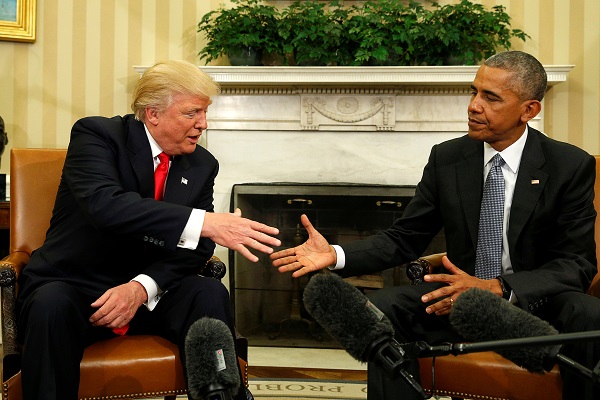 Barack Obama meets with Donald Trump in the Oval Office of the White House. REUTERS/Kevin Lamarque

By: Steve Holland and Jeff Mason

WASHINGTON (Reuters) – U.S. President Barack Obama and President-elect Donald Trump met on Thursday for the first time, setting aside the deep rancor that dominated the long campaign season to discuss the transition to the Republican’s inauguration on Jan. 20.

Obama, who vigorously campaigned for his fellow Democrat to succeed him, had repeatedly called Trump unfit for the president’s office, while the businessman had often dubbed  Obama’s eight-year tenure a “disaster.”

But in separate post-election remarks on Wednesday both men appeared to seek to help the country heal from a bitterly divisive campaign, and that tone continued into the White House meeting.

Seated next to Obama after their talks, Trump told reporters: “We really discussed a lot of situations, some wonderful, some difficulties.” He said Obama explained “some of the really great things that have been achieved,” but did not elaborate.

“It was a great honor being with you and I look forward to being with you many, many more times in the future,” Trump said, with a tone of deference.

Trump, a real estate magnate who has never held political office, later met congressional leaders, including U.S. House of Representatives Speaker Paul Ryan, a Republican who has had a strained relationship with the party’s presidential candidate.

Amid those efforts to bury hatchets, there were scattered protests in a string of U.S. cities against Trump for a second day on Thursday. Security fences were erected around Trump’s new hotel in Washington, just blocks from the White House, and around New York’s Trump Tower as students protested his election.

Obama said he had offered assistance to Trump over the next couple of months, and urged the country to unite to face its challenges.

“We now are going to want to do everything we can to help you succeed because if you succeed, then the country succeeds,” Obama said, adding he and Trump discussed a range of domestic and foreign policy issues and details related to the transition period.

“The meeting might have been at least a little less awkward than some might have expected,” White House spokesman Josh Earnest told reporters.

Obama and Trump’s relaxed, cordial demeanor in front of the cameras was in stark contrast to the months of harsh rhetoric during the campaign.

Trump used Obama as a punching bag during his campaign speeches, repeatedly attacking the president’s policies from healthcare to an Iran nuclear deal. Both Obama and first lady Michelle Obama attacked Trump as temperamentally unfit for the White House and dangerously unprepared to have access to U.S. nuclear codes.

Asked at a White House briefing on Thursday whether the meeting had eased any of the concerns about Trump that Obama expressed during the campaign, Earnest said, “The president was never in a position to choose a successor. The American people chose his successor.”

Trump went from the White House to Capitol Hill for meetings with Republican congressional leaders, most of whom had a frosty relationship with Trump during a campaign where he tore into the Washington establishment.

Republicans also retained control of the Senate and House in Tuesday’s election, meaning at least some of Trump’s agenda may find friendly terrain in Congress.

Trump emerged from meeting Ryan, along with vice president-elect Mike Pence, to tell reporters, “We’re going to lower taxes as you know.” He added, in reference to Obama’s signature healthcare reform of 2010 that is a common target of Trump and congressional Republicans, “We’re going to fix healthcare and make it more affordable and better.”

In a friendly moment of Washington tourism, Ryan took Trump to the Speaker’s Balcony in the Capitol to show him where construction is already underway on a stage for Trump’s swearing-in ceremony in January.

Trump also met for an hour with Senate Majority Leader Mitch McConnell. The future president said afterward that he told the senator his top three priorities were better control of immigration and the borders, healthcare and jobs.

In what seemed like a possible early pivot by Trump, controversial campaign proposals, including his call to ban Muslims from entering the United States, disappeared for a while on Thursday from the president-elect’s campaign website. His campaign later blamed a technical problem and the statements were returned to the website.

However, Trump declined to respond when asked by reporters after meeting with McConnell if he would ask Congress to ban Muslims from entering the country.

Proposals such as this, along with his free-wheeling tone and frequent insults of critics and rivals, earned Trump the disapproval of not just Democrats but many in the Republican establishment during the election campaign.

Thursday’s flurry of meetings was the start of fence-mending that also included the current and future first ladies.

Michelle Obama, herself was a fierce critic of Trump during several campaign appearances for Clinton, met privately with Trump’s wife, Melania, in the White House residence. She showed Melania Trump the famous Truman Balcony as well as the State Floor of the White House.

Michelle Obama has raised two daughters in the White House and the Trumps have a son, 10 year-old Barron. The two women discussed raising children at the White House, Earnest said.