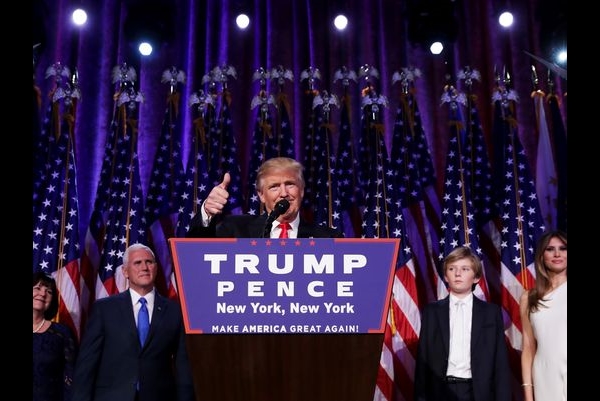 How did Trump manage his astonishing victory?

“It’s not that Hillary Clinton’s supporters sat on their hands, it’s that Trump’s supporters came out in larger numbers than we expected,” says Scott Lucas, professor of U.S. history at the University of Birmingham in Britain.

“They appear to have personally been more highly motivated to vote.”

The fact that Trump’s supporters came out strongly may point to the deeper reason why he won: his success in tapping into widespread disillusionment in America with the political establishment and a desire for change.

A Reuters/Ipsos poll released as Americans voted in the November 8 election found that 72 percent of voters felt that “traditional parties and politicians don’t care about people like me,” and 57 percent felt that “America needs a strong leader to take the country back from the rich and powerful.”

Trump succeeded in exploiting this mood as he campaigned on a slogan of “Make America Great Again!” and cast himself as an outsider free of political baggage and able to spark change, particularly in comparison to Clinton, a former senator, secretary of state, and first lady who has spent three decades in high national politics.

“In the Rust Belt states in particular, that notion of ‘Make America Great Again’ is one that resonated with white voters who feel that manufacturing jobs have disappeared and not been replaced,” says Michael Cullinane, professor of U.S. history at Northumbria University in Britain. “Clinton couldn’t offer change in the same way because she is a political insider who has been working in various [government] roles for roughly 30 years.”

By contrast, Clinton scored a 2 percentage-point lead over Trump among women voters and did better with minorities. Some 89 percent of African Americans, 66 percent of Hispanics and 65 percent of Asian-Americans supported Clinton.

Trump’s supporters wanted an outsider and he convinced them he was one, despite his own successful career as a real-estate magnate in New York. He distanced himself from established politicians by labeling them untrustworthy. He also underlined his outsider status by openly quarreling with the media — which he unfailingly called “the dishonest press” — and doing much of his communication directly with the public through constant use of Twitter.

All the while, he touted his own business background as a better preparation for the presidency than any political experience. He repeatedly accused the Obama administration — in which Clinton served as secretary of state – of striking bad trade deals with China and promised he would negotiate better terms for America.

As Trump claimed the role of an outsider, Trump also had one asset his rival Clinton did not have: television celebrity status.

While Clinton was familiar to the public from her many official posts, including serving as a senator from New York, he was well-known as the host of the reality TV show The Apprentice. The show, which began in 2003 and ran 14 seasons, featured young businesspeople who competed for a chance to work for Trump’s real estate organization. Trump’s response to those who failed to make the grade — “You’re fired!” – became a household word and helped Trump portray himself as a decisive businessman who gets things done.

With the election now over, the challenge for Trump will be to deliver on the many promises he made to his supporters over the course of the campaign season.

His most controversial promises include building a wall at Mexico’s expense to stop illegal migration into the United States, renegotiating some international trade arrangements, and punishing U.S. companies that export jobs overseas.

“He has four years to make his case, to build his wall, to make these trade deals, to show everyone the ‘Art of the Deal,'” Cullinane says in a reference to Trump’s 1987 advice book on business practices. “But after four years, he won’t be an outsider anymore, and that is where the voters will have to judge whether he has met their expectations or not.”