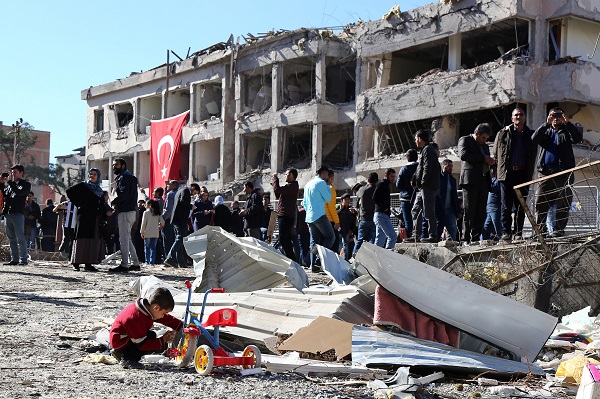 A boy plays near a police building, which was damaged during Friday's car bomb attack, in the Kurdish-dominated southeastern city of Diyarbakir, Turkey, November 5, 2016. REUTERS/Sertac Kayar

ANKARA (Reuters) – Turkey’s military hit 71 ISIS targets in Syria over the last 24 hours, the army said on Saturday, intensifying strikes against the militant group, which has claimed responsibility for the latest bomb attack in southeast Turkey.

Five Islamic State fighters were killed in the strikes, as were five Turkey-backed rebels and one Turkish soldier, the army said in its statement. It said coalition forces conducted five air strikes, killing another eight ISIS militants.

Turkey is backing a group of Syrian Arabs and Turkmen in northern Syria in its Euphrates Shield operation, which has swept ISIS from its southern border.

The Sunni hardline group has claimed responsibility for a car bomb in the southeastern Turkish city of Diyarbakir on Friday that killed nine people and wounded more than 100.