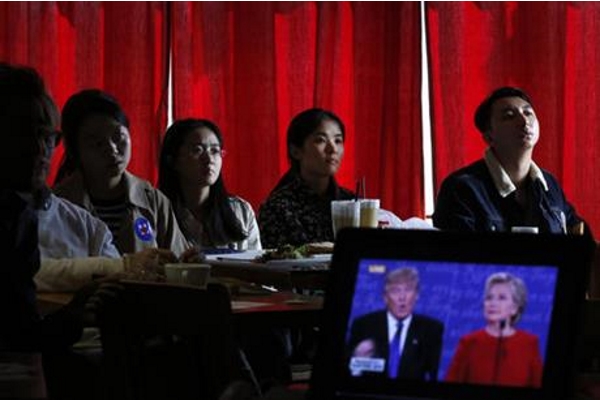 WASHINGTON – Americans will elect a new president on November 8, and while issues like the economy and foreign policy will be important, polls indicate many voters are likely to make their decision based on how they feel about the personal attributes of the two major candidates, Democrat Hillary Clinton and Republican Donald Trump.

Character issues have dominated the 2016 campaign from the beginning, and there seems to be no let-up in the final days as Clinton and Trump remain focused primarily on each other’s perceived flaws.

The renewed FBI probe of Clinton’s use of a private email server while secretary of state has pushed the issue of her trustworthiness once again front and center. And Trump wasted little time in highlighting the development in his campaign rallies, including one in Phoenix, Arizona.

“This is the biggest political scandal since Watergate, and it’s everybody’s deepest hope that justice, at last, will be beautifully delivered,” said Trump.

While Clinton now finds herself on the defensive over the email controversy, she also has shown a willingness to continue to lash out at what she believes are Trump’s character flaws in the final days of the campaign, including a recent get-out-the vote event in Miami.

“Donald Trump is out there stoking fear, disgracing our democracy and insulting one group of Americans after another,” said Clinton.

“This race has primarily become about character and about personality,” said Dallek. “I think this issue of character is going to remain front and center. I don’t think it is going away and I think to an unusual degree, issues and policies are not really as central as they typically are.”

Polls show many voters question whether Clinton is trustworthy. An even greater number, though, fear that Trump lacks the temperament to be president.

Clinton’s challenge was clear in a recent CBS News poll that found only 36 percent of those surveyed said they found Clinton “honest and trustworthy,” compared to 60 percent who did not.

Trump has an uphill battle, however, on the issue of temperament. In that same CBS poll, 65 percent of those surveyed said Trump did not have “the right kind of temperament and personality” to be president, compared with 59 percent who thought Clinton did.

The perceived flaws of the two candidates have dominated the campaign to an unusual extent, said West Virginia University political scientist Patrick Hickey.

“I think that is a very odd American presidential election in that both candidates are viewed unfavorably by the majority of the American people,” Hickey told VOA on the WVA campus in Morgantown recently. “Usually that might happen to one candidate, but not both.”

The questions about character have been center-stage in the campaign and came into sharp relief during the three presidential debates. Trump went after Clinton over the email issue in the second presidential debate and took the unprecedented step of promising an investigation if elected.

“If I win, I am going to instruct my attorney general to get a special prosecutor to look into your situation because there has never been so many lies, so much deception,” said Trump.

Clinton also seized opportunities to question Trump’s character. In the third debate, it was Clinton who went on the offensive over a series of controversial Trump comments about women.

“Donald thinks belittling women makes him bigger. He goes after their dignity, their self-worth, and I don’t think there is a woman anywhere who doesn’t know what that feels like,” said Clinton.

For much of the campaign, when one candidate or the other has been focus, that person has generally suffered in the polls. And that’s why the cycle of repeated attacks on each other continues, said American University analyst Austin Hart.

“I think they are happy right now focusing on the candidates themselves, and less about the issues. But that could change, and if it does then something like the economy, like immigration, could matter more,” said Hart.

Some analysts believe Trump’s long list of controversial comments and perceived insults, however, have made it tougher for him to make up much ground.

“He’s viewed as less knowledgeable, obviously less experienced, less empathy, doesn’t have the right temperament to be president,” said Charles Prysby, a political scientist at the University of North Carolina at Greensboro. “So he is being hurt a lot on character traits, more than anything else.”

With all the attacks and focus on the character of the candidates this year, West Virginia’s Patrick Hickey said the election outcome likely will depend on which supporters are more motivated to vote.

“And this is a kind of anti-election, as opposed to a pro-election, which I think means that on Election Day, turnout is really going to be what matters, which side can turn out voters to actually get to the polls,” said Hickey.

Given all the focus on character and the multitude of negative attacks, voters seem as eager for the end of the campaign as they are to know the outcome on November 8. One of the longest and most divisive U.S. election campaigns will come to a close next Tuesday, and for many voters, the end can’t come soon enough.