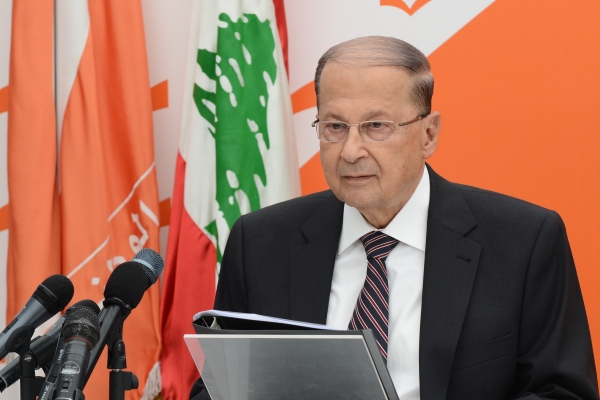 Lebanon's parliament named Michel Aoun as the nation's president Monday. He is backed by the powerful Hezbollah group and his rise to power could give the Iranian-backed militia greater say in Lebanon politics.

Lebanon’s parliament named Michel Aoun as the nation’s president Monday, concluding a political stalemate that left the position vacant for two and a half years. He is backed by the powerful Hezbollah group and his rise to power could give the Iranian-backed militia greater say in Lebanon politics.

Aoun, 81, is a Maronite Christian, a requirement for the Lebanese presidency as per its confessional political system that also mandates a Sunni Muslim prime minister and Shiite Muslim speaker of parliament. Hezbollah, a Shiite Muslim militant group, has been called a terrorist organization by the United States government.

After he was announced president, Aoun said that “strengthening the Lebanese army will be at the top of my agenda, likewise reinforcing the Lebanese economy and society.”

“Israel is still a threat to Lebanon… your leadership will face tremendous challenges in the shadows of significant events in the region, the most prominent among them being, the war in Syria,” Lebanese Parliament Speaker Nabih Berri said after the election Monday.

Aoun is referred to as “the General” by his followers and it’s hoped that the former military man’s election can help mend Lebanon’s fractured political scene plagued by sectarianism and influencefrom foreign powers, especially Saudi Arabia and Iran. While the Lebanese presidency is reserved for a Christian, Sunnis and Shiites have formed opposing political coalitions whose clashing agendas halted the country’s political progress in recent years. Among other parties, Saudi Arabia supports the Sunni Future Movement and Iran supports the Shiite Hezbollah. Since former president Michael Suleiman left office in 2014, there were 45 political sessions dedicated toward electing a new president to no avail.

Aoun’s success is another political victory for Hezbollah and Syria, who will likely use a friendly president to advance their political agenda, which includes stronger support for Syrian President Bashar al-Assad in the Syrian Civil War and opposition to Israel.  Aoun’s election also came thanks to the Oct. 20 endorsement of Future Movement leader Saad Hariri, who is expected to receive the nomination for the position of prime minister in return, and may signify a significant concession by Saudi Arabia and the West in their role in Lebanese political affairs. Iran and Saudi Arabia have looked to expand their political influence in the Middle East in recent years, supporting opposing causes in conflicts in Syria and Yemen.

Aoun’s leadership may be troubling for Syrian refugees, who have flocked to Lebanon in droves in recent years. Lebanon has taken in more than 1.1 million Syrians, more than any other country, but Aoun has called their presence in the country a “conspiracy” in the past and has asked for support from Syrian authorities from preventing refugees from crossing the border into Lebanon.

Aoun was born 1935 in Harat Hreik, southern Beirut. At 20, he enrolled in the Military Academy in Beirut and went on to receive further training in France. In 1975, civil war broke out in Lebanon, creating bloody sectarian rifts in the country. By 1982, Aoun was a commander of Christian forces within the Lebanese Army and eventually rose to the top position of the entire armed forces. He served in 1988 as prime minister of an interim military government. Throughout the 15-year war, Aoun fought mostly pro-Syrian, Druze and Palestinian paramiliary forces. By 1989, Syria and its supporters attained significant influence over the country and denied the legitimacy of Aoun’s post.

When the conflict ended with the 1989 Taif Accords, Aoun felt that Syria had been granted too much power over Lebanon’s affairs. Aoun declared a war of liberation against Syria, but the latter was supported by the U.S in exchange for Syrian support against Iraq in the Gulf War. Aoun’s popularity began to wane as he fought alongside the Lebanese Forces, a Christian militia. The Syrian military gained the upper hand and Aoun fled to France in exile. While abroad, he retained popularity among Lebanese Christians and others who opposed pro-Syrian rule of Lebanon. He returned in 2005 after the assassination of then Prime Minsiter Rafik Hariri prompted mass demonstrations and the withdrawal of the Syrian army. He then created the Free Patriotic Movement.

In a surprise move, Aoun met in 2006 with Sayyed Hassan Nasrallah, secretary general of the Iranian-supported, pro-Syrian, Shiite militia Hezbollah. The former rivals signed the Memorandum of Understanding between the Free Patriotic Movement and Hezbollah, and the two parties became political allies.