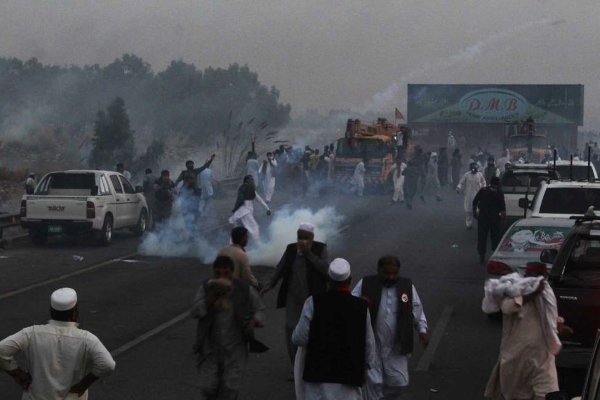 Pakistani police have fired tear gas to scatter hundreds of antigovernment protesters heading for Islamabad after a court cleared the way for opposition politician Imran Khan to hold a mass protest this week.

Pakistani TV reported on October 31 that police fired tear gas at a crowd approaching roadblocks near the town of Swabi, about 70 km from Islamabad, on a highway linking the capital to the northwestern city of Peshawar, in Khyber Pakhtunkhwa province.

Police have set up roadblocks on major roads, particularly those from Khan’s political heartland of Khyber Pakhtunkhwa province, which is ruled by his Pakistan Tehreek-e-Insaf (PTI) party.

Khan has threatened to “shut down” Islamabad in his push to unseat Prime Minister Nawaz Sharif on grounds of alleged corruption linked to the “Panama Papers” leak.

Holding offshore companies is not illegal in Pakistan, but Khan has implied that the money was gained by corruption.

Khan admitted in May that he himself used an offshore company to legally avoid paying British tax on a London property sale.

Based on reporting by Reuters and AP