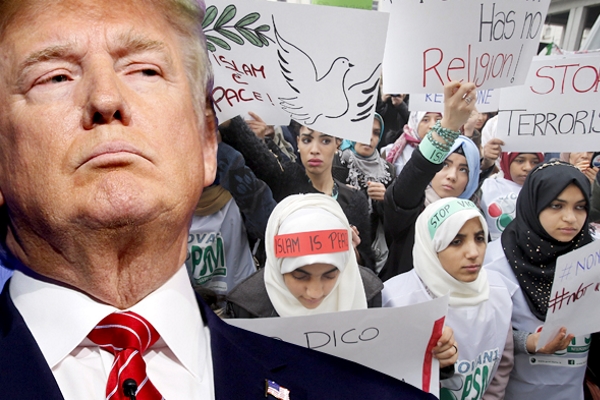 A girl (bottom C) holds a placard during a protest called "Not in my name" of Italian muslims against terrorism, in downtown Milan, Italy, November 21, 2015. The placard read: "I say no to violence". REUTERS/Alessandro Garofalo - RTX1V63U

Rodwaan Saleh ended his sermon on Friday at the River Oaks Islamic Center mosque with the same plea heard at mosques around the city: Vote on Nov. 8.

Across the country, American Muslims are mobilizing to vote in an election in which their religion has played a key role, a target of Republican nominee Donald Trump who called for a ban on Muslim immigration in the wake of terrorist attacks and accused the community of not doing enough to root out extremists.

A record 86 percent of registered Muslim voters are expected to cast ballots nationally this year, and the overwhelming majority — more than 70 percent — are expected to vote for the Democratic nominee, according to surveys. Muslims represent only about 1 percent of the population, but high turnouts in states where the election is close could push the electoral votes to Clinton, analysts said.

Texas could be one of those states as recent polls show Clinton within striking distance of Trump. While most analysts expect the state to stay in the GOP column, a high turnout of Muslims voting for Clinton could help upset those predictions.

Among those who say they will vote for Clinton is M.J. Khan, a Republican who served three terms on the Houston city council from 2004 to 2009. Khan, who immigrated from Pakistan in 1976 and owns businesses in oil, gas and real estate, said Muslims historically were attracted to Republicans because of their opposition to abortion, support for limited government and emphasis on values that frown upon divorce and pre-marital sex. But Trump’s derogatory comments and attacks against Muslims, Mexicans, and other minorities will lead him to vote against his party’s presidential nominee.

“We expect leaders to have strong character and inclusivity in their discourse,” Khan said. “After what Mr. Trump has said about many groups, Latinos, Blacks, Muslims and women, I cannot support a leader with such insulting views.”

Texas has one of the largest Muslim populations in the country, and Houston the largest in the state. More than 60,000 Muslims live here; the city is home to more than 20 mosques.

Houston’s Muslim population is nearly as diverse as the city itself, community leaders say. About 75 percent have Indian or Pakistani backgrounds and 15 percent are Arab. The remaining 10 percent were born in places like China, Myanmar, South Africa — and the United States.

That diversity was displayed at Friday’s service at the River Oaks Islamic Center mosque, where people all races — black, white, Asian — nodded along with Saleh’s sermon on balancing faith and entrepreneurship. As they sat or kneeled on carpeted floors in rooms separating men from women and children, volunteers waited in the lobby with fliers on early voting locations.

Saleh, the executive director of the Islamic Society of Greater Houston, said the community has been particularly unnerved by Trump’s proposal to ban Muslim immigration. Saleh, born in the United States to Sudanese immigrants, said he understands the need to conduct background checks on people emigrating from Syria and other war-torn nations, but imposing a blanket ban on all Muslims is unfair, un-American, and probably unconstitutional.

He said it is wrong to single out any religious group; throughout history, whether Protestants, Catholics, Jews, Sunnis or Shiites, targeting people who practice a particular religion has led to persecution and atrocities.

“It will open a Pandora’s box,” said Saleh.

Afshan Jilani, 62, has lived in Houston for about 40 years. Born in Pakistan, Jilani said she views the proposed immigration ban as code that has intensified anti-Muslim feelings and led to harassment and attacks. One of her daughter’s friends told her that while walking to classes one evening, a group of young men yelled at her to “go back where you came from” and called her a “camel jockey.”

“I just envision an America with President Trump,” Jilani said, “and I start hyperventilating.”

The anti-Muslim feelings that Trump and his campaign have tapped have led many young Muslims to take precautions, said Saqib Giza, 22, president of the Muslim Students Association at the University of Houston. For example, his younger sister and her friends who wear hijabs look for chaperones to escort them to evening classes. His friends are wary of mentioning their faith among people they don’t know.

The shooting of Giza’s friend, Arslan Tajammul outside the Madrasah Islamiah mosque in Houston this summer, has left him and others on edge about simply walking to services. “It makes me feel insecure about myself when I try to build relationships with people,” said Giza, a senior studying industrial engineering.

A recent report out of Georgetown University found that in 2015 Muslim Americans were six to nine times more likely to be victims of violence than in period before the terrorist attacks of September 11, 2001. The study also found that soon after Trump called for shutting down mosques following the mass shootings by Islamic extremists in Paris and San Bernardino, Calif. in December, anti-Muslim attacks tripled, with nearly half directed against mosques.

Neither the Trump campaign or Republican National Committee responded to requests for comment.

Warda Ahalid, 30, a Middle East policy analyst who travels between her home in Houston and work in Washington D.C., said she is still undecided about the presidential election. Both parties, she said, have contributed to a narrow, negative view of Muslims.

James Zogby, president of the Arab American Institute in Washington and chair of the ethnic council of the Democratic Party, said Clinton and Democrats have addressed many of the issues raised by Ahalid, and are very much aware of the dangers the Islamic community faces. “We take the protection of Muslims very seriously,” he said.

Nabila Mansoor, director of the Houston chapter of Emerge USA, an Islamic civic organization, has gone to mosques across Houston to register voters and hand out fliers with information about early voting. In past elections, she said, she had to recruit people to help. Not this year: volunteers are flooding her organization, most driven by fears of a Trump presidency and determination to try to prevent it.

With early voting underway in Texas and other states, Mansoor said, anxieties are growing among Muslims. But she hopes tensions will ease if Clinton, as recent polls suggest, wins.

“People just want this election to be over,” Mansoor said.