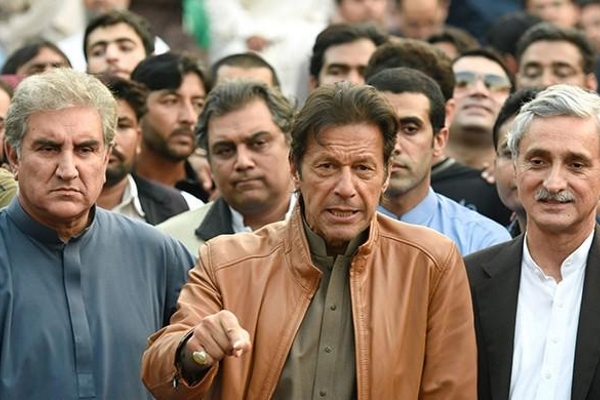 Imran Khan (center) says he is virtually under house arrest in Pakistan.

ISLAMABAD – Authorities in Pakistan have come under severe criticism for a crackdown on political activists trying to hold an anti-government demonstration, but allowing a proscribed radical Islamist group to rally in the heart of the nation’s capital.

But the government banned all political and religious processions in the city Thursday and unleashed a preemptive nationwide crackdown to try to stop PTI activists and leaders from marching on Islamabad, detaining hundreds of people.

Khan has also been confined to his residence near Islamabad along with senior party leaders meeting there, though he has vowed to show up and lead the November 2 rally in the city.

But while PTI supporters battled the police all day Friday and late into the night, the Sunni-based Islamic party – Ahle Sunnat Wal Jamaat (ASWJ) – rallied in a central part of Islamabad despite the government ban on such gatherings.

Interior Ministry officials, however, justified the religious rally, saying it was an annual congregation for the ASWJ that had formally sought permission in advance.

But the religious rally provoked harsh criticism of the government for allowing what “a proponent of religiously-inspired extremism” to congregate in the capital at a time when Pakistan is being asked to rein in Islamist groups allegedly using its soil to stage terrorist attacks in Afghanistan and India.

Islamabad denies accusations of allowing use of its soil for terrorist activities against any country. Instead, it cites a long-running counterterrorism military campaign that killed thousands of terrorists in recent years, and killed of tens of thousands of Pakistanis in retaliatory terrorist attacks.

Human rights groups and media commentators accused the Sharif government of applying “double standards” and raised questions about Pakistan’s commitment to containing violent extremism, to which ASWJ is linked.

Some of the group’s leaders are declared fugitives from the law.

Leader of the of the opposition Pakistan Peoples Party, Bilawal Bhutto, also criticized the Sharif government for targeting political opponents instead of going after what he called Taliban extremists and their “facilitators as well as financiers” in the country.

He did not directly refer to the religious congregation in Islamabad.

Some critics said the Islamist assembly in the capital was also against the so-called National Action Plan the government has devised jointly with the military to counter terrorism and extremism in Pakistan.

The plan outlined steps to neutralize religious groups perceived to be supporters of militants threatening the state of Pakistan.

Sharif has been under public pressure and criticism since early this year when his family members were named as holders of offshore bank accounts in leaked financial documents from Panamanian law firm Mossack Fonseca.

The prime minister has since defended his financial record through speeches in parliament and on national television, rejecting charges of any financial wrongdoing in building the overseas assets. But Khan insists Sharif has lost the moral authority to rule, and demands legal action against him.