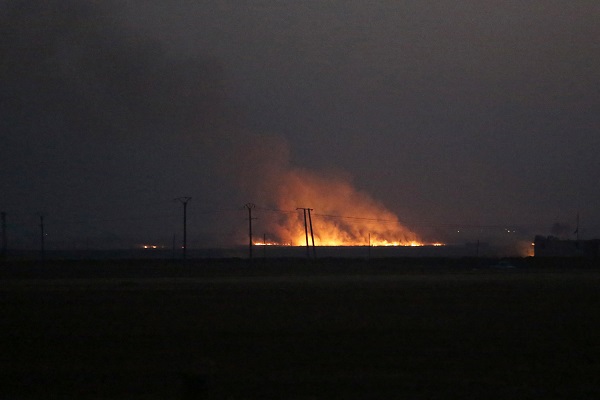 By: Andrew Osborn and Lisa Barrington

MOSCOW/BEIRUT (Reuters) – Russia said on Tuesday it would extend a moratorium on air strikes on Syria’s Aleppo into a ninth day, but a monitor and a civil defense official said that rebel-held parts of the divided city had been struck in recent days.

Defence ministry spokesman Major-General Igor Konashenkov said Russian and Syrian planes had not even approached, let alone bombed, the devastated city since last Tuesday when Russia suspended air strikes ahead of a pause in hostilities.

That moratorium on air strikes was being extended, Sergei Rudskoi, a defense ministry official, said separately on Tuesday, without specifying for how long.

Rudskoi said that meant Russian and Syrian planes would continue to stay out of a 10 km (6-mile) zone around Aleppo.

But the Syrian Observatory for Human Rights said air strikes had resumed since the lull in fighting ended on Saturday, focusing on major front lines, including in the city’s southwest. There had been no civilian deaths from air strikes inside eastern Aleppo, however, the monitor said.

Ibrahim Abu al-Laith, a civil defense official in eastern Aleppo, also said air strikes and shelling had hit the rebel-held half of the city near front lines in the past week.

“There was artillery shelling…and there were planes, the city was hit by several strikes,” he said.

On Tuesday, districts outside the city to the west were hit by air strikes, the Observatory said. Air strikes had continued outside Aleppo during the ceasefire.

Russia has been the Syrian government’s most powerful ally against rebels in a civil war now well into its sixth year.

He expressed disappointment that it had not been possible to evacuate wounded people from Aleppo and bring in humanitarian relief supplies during the three-day pause in the fighting.

Aleppo, Syria’s most populous city before the war erupted, is now divided into government- and rebel-held areas. Intense bombardment by Syrian and Russian warplanes has reduced the rebel-controlled east to ruins.

Russia has accused rebels of thwarting its efforts to evacuate civilians, saying they open fire on those wanting to leave, but rebel groups say Syrian government forces and allies have been shelling and sniping around the corridors.

Rebels did not accept the ceasefire, which they said did nothing to alleviate the situation of those who chose to remain in eastern Aleppo, and was part of a government policy to purge cities of political opponents.

Rudskoi said around 50 women and children had managed to leave Aleppo late on Monday despite the dangers and were escorted by Russian military officers.

He said Russia was ready to help broker further ceasefires to allow wounded civilians to be evacuated.

Some Western countries have repeatedly accused Russia of killing civilians during its air campaign in Aleppo. Moscow denies this, saying it targets rebel groups inside the city.

On Tuesday, it said allegations by rebels and rescuers that it had bombed the Sakhour hospital in eastern Aleppo earlier this month were false and urged the world to focus instead on what it said was the killing of civilians in neighboring Iraq in air strikes carried out by the U.S.-led coalition.