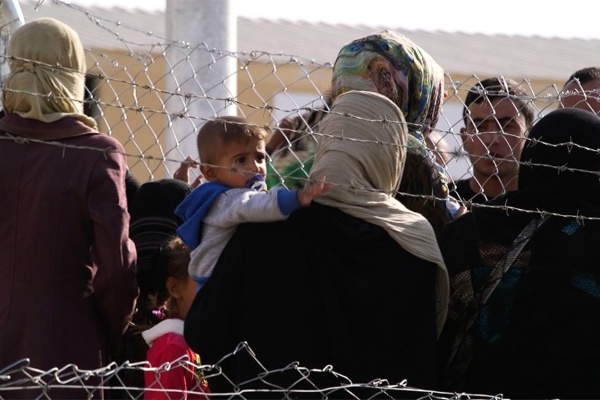 DEBAGA, IRAQ – When Peshmerga soldiers cut off ISIS’s supply route from Mosul to her village in Hawija, sugar prices suddenly shot up 30 times, according to Layla, a mother of three.

She had survived two years of airstrikes and despotic rule from ISIS militants, but after a few months she ran out of food and money. She feared her children would starve. So, like many people in this crowded refugee camp, she paid an ISIS fighter $300 about two weeks ago to tell her where the mines surrounding the village were hidden, and look the other way while she escaped.

“Recently, when ISIS catches someone trying to run away, they have beaten their feet until they were useless,” she said. But despite the extreme poverty the offensive against ISIS has thrown her family into, she still supports the war. Allowing this kind of cruelty to go on would be worse, she said.

“It would an even bigger disaster if ISIS continues,” she explained.

Iraqi and Kurdish forces are continuing to re-capture villages in a week-old offensive meant to culminate in a battle for Mosul, Iraq’s second largest city. But even as villages are taken ISIS continues to fight on new fronts, as battles in Kirkuk, a northern oil city, go into their third day.

Meanwhile families still in ISIS-controlled territories are becoming increasingly desperate, according to Fatima, who arrived a this camp 11 days ago.

Four of her 15 children are still in her village, she said, having been beaten when they tried to escape. In other areas, people have been beheaded, tortured or imprisoned for attempting to flee, she added.

“There are still a lot of families,” she pleaded, “If they are not helped soon they will die. There is no medicine and people have diseases.”

Layla also arrived at the camp less than two weeks ago, and as she leaned against the stone wall of a converted schoolhouse on Sunday, she said she was still waiting to move herself and her children into a tent for shelter. Even a pillow would be nice, she said.

“More people are coming and we don’t have enough water,” she added. “We are scared for our children.”

But the 16,000 children in this camp are far better cared for than the more than half a million children still trapped in ISIS territories in Iraq, according to the U.N. children agency’s Middle East regional manager Geert Cappelaere.

Among the massive influx of refugees expected to flee Mosul if or when the Iraqi and Kurdish forces clear their path, are 600,000 children that haven’t had access to humanitarian aid in more than two years, he said.

“These children are children. They are victims. They haven’t done anything wrong,” he continued, while touring the camp on Sunday. “We have to allow them to live a normal life.”

Other aid groups warn that a rapid influx of refugees may soon become a humanitarian disaster, despite rapid preparations by every organization on the ground.

“We’ve heard one million people will be displaced from their homes,” said Rizgar Barzani, a camp manager with the Barzani Charity Foundation, outside a mass of tents being built Saturday in the desert surrounding the war zone.

“We don’t have enough room in the camps that we have,” he added. “We need more resources and more time.”