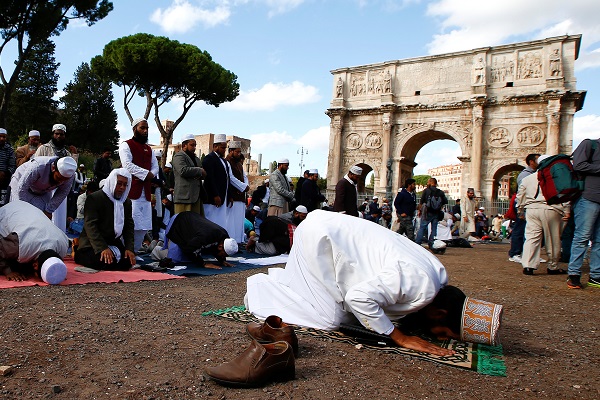 Muslims hold Friday prayers in front of the Colosseum in Rome, Italy October 21, 2016, to protest against the closure of unlicensed mosques. REUTERS/Tony Gentile

ROME (Reuters) – Hundreds of Muslims prayed next to Rome’s Colosseum on Friday to protest against the closure of makeshift mosques, calling on city authorities to protect their religious rights.

Worshippers knelt on prayer mats and tarpaulin on the pavement meters away from the ancient amphitheatre. Some held placards reading “Peace” and “Open the mosques”.

At least 1.6 million Muslims live in Italy but there are only a handful of mosques officially registered as such with the government.

Most worship takes place in houses and Islamic cultural centers – a development that some right-wing politicians have said makes them difficult to monitor, raising the risk of radicalization, particularly in the wake of militant attacks across Europe.

Interior Minister Angelino Alfano said in August that “mini mosques in garages” should not be allowed.

The rights group that organized the demonstration, the Dhuumcatu Association, said police have closed three improvised mosques in Rome in recent months.

Attaching placards to a lamp post near the Colosseum, Sikdir Bulbul, a 41-year-old Bangladesh-born Italian citizen who has lived in Rome for 16 years, said the mosque he helped establish in 2012 had been shut down in September.

“Friday prayer is very important to us so today we have come to the Colosseum. Otherwise where else can we pray?” he said.

A spokesman at city hall had no immediate comment.

Right-wing Roman politician Giorgia Meloni of the Brothers of Italy party, who came third in a mayoral election this year, has called for Muslims to be obliged to pray in Italian.

The Dhuumcatu Association said there needed to be clearer rules on setting up mosques.

“We are sick of the criminalisation of our places of worship,” it said on its Facebook page. “There are no relevant regulations, and we cannot invent solutions independently of the authorities.”