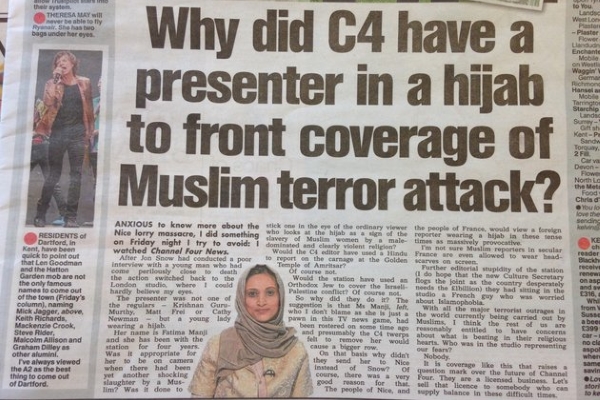 The Channel 4 News presenter Fatima Manji has questioned whether the press regulator will ever prohibit hate speech on the grounds of religion after it cleared Kelvin MacKenzie over his criticism of her wearing a hijab while reporting on the Nice terror attacks.

In an unsuccessful appeal against the ruling of the Independent Press Standards Organisation (Ipso), she said its decision was “fundamentally flawed” and legitimised discrimination.

In the appeal, Manji, said she and her family had to take safety precautions after she was “singled out personally by Kelvin MacKenzie because of my religion.”.

The letter, seen by the Guardian, says: “This was akin to hate speech and incitement against an individual. Freedom of expression does not stretch to allow such speech if the newspaper personally targets the individual.”

She concludes: “Many will question when would Ipso ever find a breach of the clause prohibiting prejudicial references to an individual’s religion.”

In an interview on BBC Radio 4’s Today programme, Manji said Ipso had given a “green light for newspapers to attack minorities and Muslims in particular. To know … that it is effectively open season on minorities on Muslims and minorities in particular is frightening.

In his column for the Sun on 18 July, the paper’s former editor accused Channel 4News of “editorial stupidity” for allowing Manji to wear a hijab when “there had been another shocking slaughter by a Muslim” in Nice.

Manji and ITN complained to Ipso claiming the article breached the watchdog’s code on the grounds of discrimination, harassment and accuracy. The regulator also received 1,700 other complaints about the article.

But on Wednesday Ipso ruled that in the context of the attack, MacKenzie had a right to question Manji’s headdress under free speech. In its ruling it said: “While the columnist’s opinion was undoubtedly offensive to the complainant, and to others, these were views he had been entitled to express.”

Manji said she feared for her safety after the MacKenzie column was published. In her appeal letter she says: “Pundits called radio stations to talk about my being lynched in support of Mr MacKenzie.

“Not only that, it prejudicially and inaccurately links me to a terrorist attack, which the vast majority of Muslims (including myself) believe to be absolutely abhorrent and against the teachings of Islamic principles. Indeed many of the victims of this attack were Muslims themselves, including a woman who like me was named Fatima and also wore a headscarf.”

It added: “There is also no consideration that the publication of this column led to fears about my physical safety in general given the current climate of Islamophobia and the risk that my being depicted next to the words ‘terror’ could lead to unwarranted attention or even abuse on the streets. Indeed my family and employer took precautions to ensure my safety in the days following the publication of this column.”

A spokesman for Ipso confirmed that it had rejected Manji’s appeal. He said: “The appeal has already been dealt with as part of the process. Any review that she has within the process has been exhausted.”

In its ruling, Ipso said: “The article did not include a prejudicial or pejorative reference to the complainant on the grounds of religion. The article did refer to the complainant but it did so to explain what triggered the discussion about a legitimate subject of debate: whether newsreaders should be allowed to wear religious symbols. In the committee’s view, the columnist was permitted to identify what prompted his discussion, rather than merely raising it in the abstract.

“Furthermore, he was entitled to express his view that, in the context of a terrorist act which had been carried out ostensibly in the name of Islam, it was inappropriate for a person wearing Islamic dress to present coverage of the story.”