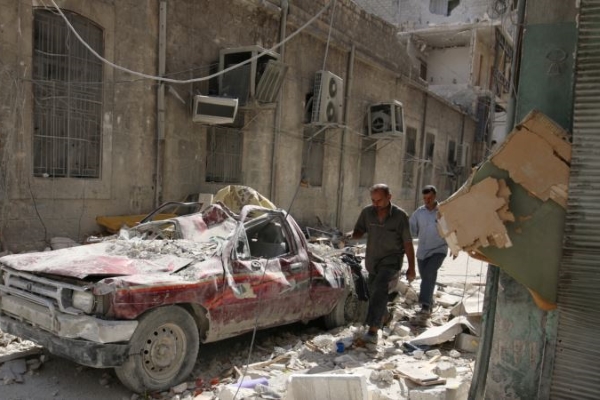 Seven-year-old Bana Al Alabed tweeted that the city of Aleppo was quiet Tuesday in the wake of overnight bombing by Syrian and Russian forces. The lull in airstrikes gave her the chance to step outdoors and enjoy some early autumn rain. With the help of her mother, a teacher, Bana began tweeting about the hardships of life in Aleppo in late September, earning thousands of followers across the globe.

But the lull in fighting came too late for other children in the city. According to Syrian civil defense, eight children, all members of a single family, were killed when their home was targeted by an airstrike on Monday.

The Syrian Observatory for Human Rights (SOHR) reported that Syrian and Russian warplanes carried out several strikes in Aleppo and the surrounding countryside overnight. One Twitter user posted video purporting to show the use of cluster bombs in Orem al-Kobra, west of the city.

Tuesday’s lull in bombing gave civilians and rescue workers–known as the White Helmets–a chance to dig through rubble for the dead or wounded.

In this YouTube video (below) by the Aleppo Media Center (AMC), a White Helmet volunteer complains about the difficulty of performing search and rescue operations without the proper equipment.

Last week, AMC posted harrowing video showing the extent of the devastation in the besieged city.

The U.S. has accused Russia and Syria of committing atrocities in Aleppo.

“The people of Aleppo have been subjected to near-constant bombardment and airstrikes…over the past years, but most intensively the past month or so,” State Department spokesman Mark Toner said Monday. “It’s killed scores of civilians, it’s leveled much of the civilian infrastructure in the city in what, at best, can only be perceived as a way to starve out and to drive out the opposition and civilians who have held on there for so long.”

Russia has said it and Syria will stop all airstrikes on Aleppo for a period of eight hours Thursday in a gesture of “goodwill” that will allow civilians to leave the city through select corridors.

Toner said a pause in bombing would amount to “too little, too late.”