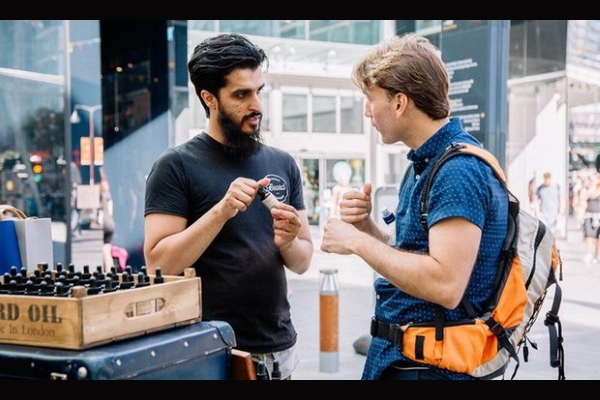 By mid-evening, the Artisan dessert restaurant in Ladypool Road, Birmingham, is crowded. People squash up on its green and pink velvet banquettes to drink mint mojitos or raspberry spice mocktails and sample an array of elaborate cakes and puddings.

Opened last year by Ali Imdad, a Great British Bake Off contestant in 2013, and his business partner Vakas Mohammed, Artisan has become a sought-out destination for couples and friends to meet after dinner. “A lot of Muslims won’t go to a bar or a club, but going out for mocktails and dessert is a good alternative,” said Imdad.

The growth of dessert parlours was a reflection of the rising disposable income of young Muslims, he said. “People want to spend money on high-quality products and experiences.”

Later this month, Imdad will take part in the Muslim Lifestyle Expo, which will showcase businesses aimed at this burgeoning consumer market. Worldwide, the sector is forecast to be worth more than £2 trillion by the end of this decade, according to the State of the Global Islamic Economy report, and is growing at nearly double the rate of the global economy generally.

More than 100 businesses from 15 countries will set up their stalls at Manchester’s Event City on 29 and 30 October. Exhibitors will include producers and suppliers of halal food brands, toiletries and cosmetics; modest fashion; travel; Islamic finance; entertainment; and greeting cards and toys.

Fashion shows, cookery demonstrations and and shows from standup comedians will alternate with seminars on empowering women entrepreneurs, motivational business speakers and workshops on Islamic art. Ten thousand visitors are expected to stump up the £10 entrance fee.

“It’s a huge untapped market. We’re just skimming the surface,” said Tahir Mirza, the expo’s founder. In 2010, the global Muslim population was 1.6 billion people. By 2050 it is expected to reach 2.8 billion, a quarter of the world’s population. One third of Muslims are under 15; two-thirds are under 30.

The size of the Muslim middle class is forecast to triple by 2030. The economies and populations of countries with Muslim majorities are growing fast and Muslim minorities in Britain, Europe and North America are young, affluent and thriving. Young Muslims are the fastest growing demographic group in the UK.

“Through their sheer numbers, their growing middle-class stature, the shift of economic and political power towards the Middle East and Asia – home to most of the world’s Muslims – and through the Muslim minorities that act as influential and well-connected leaders by the inspirational force of their faith and their refusal to accept the status quo, Generation M are determined to make change. And what a change it’s going to be,” said Shelina Janmohamed, author ofGeneration M: Young Muslims Changing the World and the vice-president of branding consultancy Ogilvy Noor.

What defines Muslim consumers is that their choices are shaped by their faith. “They believe that being faithful and living a modern life go hand in hand and that there is absolutely no contradiction between the two,” she added.

Muslim millennials – those born in the past 30 years – have attracted a variety of consumer labels. As well as Generation M, they are called “gummies” – global urban Muslims – and “mipsters” – Muslim hipsters. And they are not just avid consumers; they are energetic entrepreneurs.

The past few years have seen an explosion in small businesses set up to cater for the growing demands of the Muslim consumer market. Some had humble beginnings: fashion company, Sanzaa started as a market stall in Bradford run by two friends, Sanya Rehman and Zahra Mahmoud, and is now a shop and online brand.

The London Beard Company, set up by Abrar Mirza, sells scented oils and grooming products online and through Fortnum & Mason in London and Fenwick in Leicester, reaching beyond the Muslim market. The family-run Ibraheem Toy House, set up by Nazia Nasreen, sells educational toys and books, including dolls in hijabs and colourful prayer mats. In two years, the number of products it offers has grown from four to more than 200.

According to Halima Intikhab, who set up online Facebook page Curry On Halima in 2014 and will be demonstrating her cooking at the expo, “compared with what Muslim consumers had 10 or 15 years ago, it’s amazing. Muslims are often labelled as oppressed or having boundaries on what they do, but it’s not like that. People are really waking up to the opportunities.”

Yet, said Mirza, big brands have been cautious in targeting the Muslim market: “Those that have offered modest fashion items, such as H&M, Marks & Spencer and Uniqlo, have faced a backlash in the media.”

M&S attracted criticism for its burkini range earlier this year, even before the wave of bans on modest swimwear imposed by the mayors of French seaside towns. “I understand how difficult it is for big brands. But they are taking tentative baby steps into the market,” said Mirza.

One mainstream brand that is exhibiting at the expo is Asda, which – like other major supermarket chains – sells halal meat and food products. Major multinational suppliers, such as Kellogg’s, Unilever and Nestlé, have established halal lines to serve this emerging market.

At Artisan, which won three awards in its first year, Imdad welcomed the growing awareness of big brands of the potential of the Muslim market. “They’re jumping on the bandwagon, realising Muslims have money and want to spend it,” he said. “It’s great. But there’s still room for small businesses, too. We’re doing really well.”