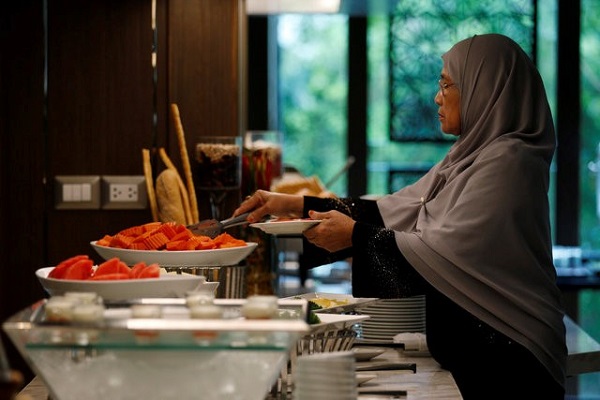 A Muslim visitor takes food from a platter for her breakfast at the Al Meroz hotel in Bangkok, Thailand, August 29, 2016. REUTERS/Chaiwat Subprasom

TAIPEI, Oct 13 — Taipei, the capital of Taiwan, is going all out to tap on the burgeoning Muslim tourism market that represented 117 million travellers or 10 per cent of the travellers worldwide in 2015.

As Muslim travellers have special needs, host Taiwan is doing its best to win them over. Hence, it’s not surprising that the number of halal restaurants and hotel will increase to 36 by the end-2016 from 29 in the first half of the year.

These are among the slew of Muslim-friendly facilities made available in Taipei, says Taipei City Government’s Information and Tourism Commissioner Yu-Yen Chien.

That is not all, Chien points out the Taipei Tourism Bureau (TTB) is also setting a new benchmark for Muslim tourism in the country. Working closely with Taiwan’s Chinese Muslim Association (CMA) and Taipei Grand Mosque, the bureau is working on bona fide halal certification.

It’s not only limited to halal eateries, in future even convenience stores may have halal sections and all these require proper halal benchmarks.

This writer was in Taiwan recently on the courtesy of Malindo Air and TTB, following the launch of the airline’s daily flights to Taipei.

While Muslim tourists may be new here but Taipei is no stranger to Islam. The 60,000 Muslims, the majority from the Hui ethnic group from mainland China, in Taiwan and the Taipei Grand Mosque in Da’an district, stand testament to this fact.

“The grand mosque is the largest and most popular mosque in Taiwan and currently could accommodate a congregation of up to 1,000 people,” says the mosque’s Executive Director, Nurundin NH Ting.

Initially there was only one main prayer hall on the ground floor but due to the increasing number of Muslims in the city, a second floor was added to cater for women.

“The mosque is open to the public so that they will have a clear picture on Islam and Muslims,” he says, adding that classes on Islamic teachings are conducted every Sunday for primary to university students.

The CMA headquarters and the Chinese Islamic Cultural and Educational Foundation (CICEF) operates from the mosque, hence the mosque is seen as an authoritative body for halal certification in Taiwan.

“We not only certify the food manufacturer, but also grant halal recognition to Muslim friendly hotels and restaurants,” Nurundin adds.

So much to offer

Many may not know that Taipei has a lot to offer for tourists, ranging from Yangmingshan National Park that offers splendid scenery of the mountains to Xiaoyoukeng that is well-known for its fumaroles (mountain-side sulphur gas exhaust).

Renowned for its night market, Taiwan has always been regarded as food heaven by many. Street food ranging from beef noodles, flavoured shaved ice to pineapple cake, you name it, are on the “must eat” list.

The country is also considered a shopping heaven with affordable merchandise available everywhere. The Eslite Spectrum Songyan Store, an iconic department store has been recommended as a “must-go place” by CNN Travel.

Eslite Arts and Events Senior Manager Sheersong Tseng notes that travellers enjoy making their own handicraft at the do-it-yourself (DIY) workshops in the department store.

Hence, for those who opt for souvenirs that are “truly made in Taiwan”, Eslite Spectrum Songyan Store is the best choice.

Traveling around and spending is also easy for visitors with the EasyCard, the Taiwanese version of Touch ‘n Go, available at all Taipei Metro stations. The card not only can be used to pay public transportation fares, but also used as en e-wallet at convenience stores or even pay for the taxi fare and YouBike public bicycle rental.

For Muslim tourists, they will be pleased to find a number of halal certified restaurants available nearby several Taipei metro stations.

For instance, tourists can get a taste of the authentic Indian and Pakistani cuisine in Khana Khazana, a restaurant that is located near Taipei 101/World Trade Centre metro station; Chang’s Halal Beef Noodles near Ximen metro station and Atami Hotel which serves hotpot cuisine and Muslim set meals near Xibeitou metro station.

For those who are interested in trying out Chinese Muslim dishes, Hui Guan near Taipei Arena Station is a good choice, while Ice Monster near Sun Yat-sen Memorial Hall Station serves mouth-watering shaved ice delights.

Muslim travelers can visit http://www.travel.taipei/muslim/eat.jsp for more information on halal restaurants near the metro stations in Taipei.

Accommodation too is no problem for Muslims as Taipei has at least 30 Muslim friendly hotels with a myriad of facilities.

Among them is the Grand Hotel Taipei, established in 1952. This landmark hotel has hosted several royal families from Middle East, including the late King of Saudi Arabia, Faisal Abdulaziz Al Saud in 1971.

Similarly, City Suites Taipei Nandong, which was opened in 2011, is another Muslim friendly hotel providing halal food and other necessities for Muslims.

More than anything else, the Taiwanese people’s hospitality itself will delight Muslim visitors. So set Taiwan as your next destination. — Bernama