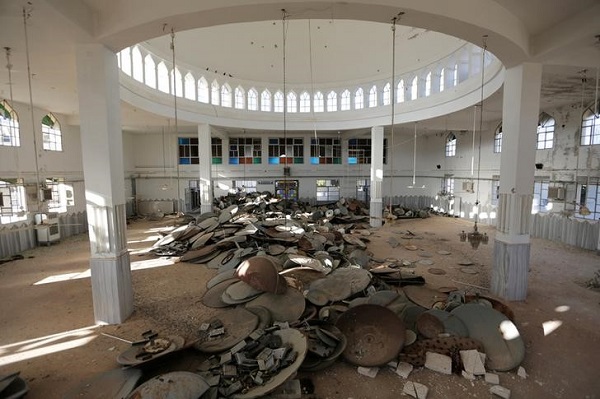 BEIRUT (Reuters) – Russia vetoed a French-drafted United Nations Security Council resolution on Saturday that would have demanded an immediate end to air strikes and military flights over Syria’s Aleppo city and called for a truce and humanitarian aid access throughout Syria.

Meanwhile, a rival Russian-drafted resolution that aimed to revive a failed Sept. 9 U.S. and Russia ceasefire deal on Syria did not garner the minimum nine votes.

President Bashar al-Assad’s forces, backed by Russian air power and Iranian, Lebanese and Iraqi fighters on the ground, hold the upper hand around the key battleground of Aleppo, whose opposition-held eastern sector has been encircled for all but a short period since July.

The government side’s bombardment of Aleppo since a ceasefire brokered by Washington and Moscow in September collapsed after a week has drawn condemnation from the United Nations and countries supporting the Syrian opposition.

France, which opposes Assad, demanded in its draft resolution an end to air strikes and military flights over Aleppo city. Russia has backed Assad with a year-long air campaign against the rebels.

French President Francois Hollande on Saturday had urged United Nations Security Council members not to use their veto against a resolution that calls for an end to bombardments of Aleppo.

Russia’s draft, which does not include that demand, urges Moscow and Washington to revive the ceasefire deal.

Syrian opposition negotiator Asaad al-Zoubi said on his Twitter account that its High Negotiations Committee would not accept any new ceasefire deal without guaranteed monitoring of it by European and Arab countries.

Syrian government forces and their allies, backed by air raids, took over an area on Aleppo’s northern outskirts on Saturday, state media and the Observatory said.

The advance in the Awaija area strengthened their hold on areas surrounding rebel-held east Aleppo, the Observatory said.

Rebel official Zakaria Malahifji of the Aleppo-based Fastaqim faction denied there had been a government advance there.

But he did confirm government advances further south in Hama province, reported by pro-Damascus media and the Observatory.

The Syrian army and its allies recaptured several towns and villages from rebels in Hama’s northern countryside, reversing recent insurgent gains in the area.

Rebels had seized towns and villages north of Hama city after launching an offensive at the end of August in rare advances while insurgent factions were pressed elsewhere.

The government’s Hama advances were their first in the area since then, the Observatory said.

It said the government side had taken advantage of recent infighting between two Islamist insurgent groups in the countryside of Idlib, north of Hama’s provincial boundary.

In a separate government advance against insurgents near Damascus, the Syrian army and allied forces seized a large portion of the town of al-Hameh to the northwest of the Syrian capital, the Observatory said.

Russia’s air power has been crucial for strengthening Assad’s position in the past year, pounding rebels including foreign-backed factions.

Washington accuses Moscow and Damascus of war crimes for intentionally targeting civilians, aid deliveries and hospitals which have been hit particularly around Aleppo in recent weeks.

Moscow and Damascus say they are targeting terrorist groups.

The ceasefire deal brokered by Washington and Moscow in September was meant to pave the way for joint U.S.-Russian targeting of extremists including al Qaeda and ISIS.

All sides in the multi-sided Syria conflict, now in its sixth year, are fighting a number of separate battles against IS.

Members of the jihadist group recaptured several villages from foreign-backed rebels in their counter attack near the Turkish border, the Observatory said.

The rebels, whom Turkey has supported with tanks and air strikes, had been pushing toward the IS stronghold of Dabiq, a village of symbolic importance to the militants.

The stiff resistance the insurgents have encountered in recent days shows the challenge they face in capturing Dabiq and flushing the jihadist group out of more areas it controls in northern Syria.

(Reporting by John Davison; additional reporting by Michelle Nichols at the United Nations and Daren Butler in Istanbul; editing by John Stonestreet and Bernard Orr)