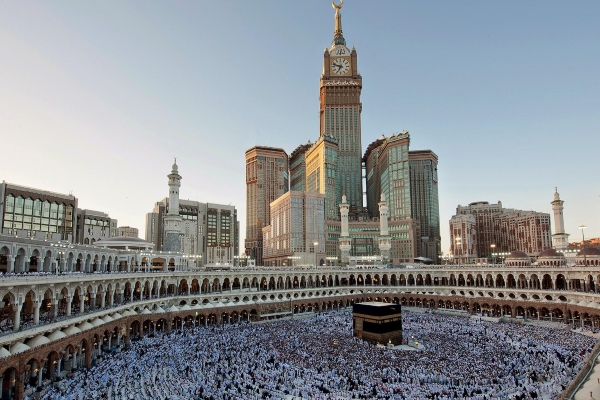 For Tariq Khan* and his family, the pilgrimage to Mecca should have been the trip of a lifetime. But after paying more than £16,000 to make the hajj they found themselves sharing a hotel bedroom with strangers and having to use squalid toilets and kitchens .

The family, from Rochdale in Greater Manchester, are among the latest group of people to return from the hajj complaining that they have been ripped-off by one of the many unscrupulous travel agents that appear to prey on the UK’s Muslim community.

Pilgrimage to Mecca is a mandatory duty that has to be carried out at least once by all Muslims who are physically able and have the financial means to undertake the journey.

Up to 25,000 British Muslims travel for hajj each year, spending an estimated £125m. Pilgrims save for years to finance the typical three-week trip. The Khan family spent £4,000 a head to go to Saudi Arabia last month. But, despite assurances that they would have a room to themselves, they say that when they arrived in Mecca they were separated into their different genders and forced to share very poor rooms with strangers – including one decrepit bathroom between eight people.

Khalid Pervez, who runs the Association of British Hujjaj (Pilgrims) UK, a charity set up to improve the experience, says many of those making the trip are being denied the basic consumer and travel protections to which they are entitled – and that the authorities have shown little interest in tackling the problem.

“While the visit will often be one of the spiritual highlights of the pilgrim’s life, the travel and accommodation is frequently appalling and, in many cases, downright dangerous. Tales of shockingly bad hotels, decrepit buses and terrible flight choices that require long waits at foreign airports are all too common among returning pilgrims. It’s not what they were sold, and in any other case it would be considered a scandal.”

He says many returning victims fail to complain because, often, they are unaware of their rights, but also because travel agents manage to convince them that it will somehow “cheapen” the hajj experience.

In 2015 an investigation by Birmingham Trading Standards into 182 Mecca-related tour businesses across the UK found that 147 were not complying with the relevant legislation. At the time 129 businesses were issued letters of warning and trader notices by the authority. It was also stated that formal enforcement action was undertaken in 17 cases.

Despite this, with the exception of a handful of recent prosecutions the rogue traders have largely gone unpunished. Hajj businesses tend to be dominated by one-man bands that act as middlemen for larger tour companies. Pilgrims are often not given any paperwork, but are still expected to pay large sums – often in cash – for their pilgrimages. Many of those selling hajj trips claim to be licenced, both here and by the Saudi authorities, but are not.

“Every year we hear about people travelling to Saudi and they all come back with stories of where they were lied to and deceived, but it has become the norm in our community to be lied to before you travel, ” says Khan, who understands there were 25 other families booked via the same agent who are complaining of similar experiences.

“Overall, the hajj experience was amazing. But I have seen videos and pictures of cockroaches and sewage leaking into the rooms. When people complained they were told nothing could be done, or in some cases they were threatened with violence. It’s shocking,” he says.

Ahmed Ali Minhas, from Coventry, who travelled to Mecca last year, is another victim who has spoken out. He paid £12,000 for himself, his wife and their son to visit Mecca and was promised four-star hotel accommodation. Instead, they found themselves in squalid conditions and much further from the Grand Mosque than promised.

“There were live wires coming out from the air conditioning, there was no facility to sit and eat dinner. It was not fit for a human to stay in that hotel. There were about 60 people in our group, and everyone started complaining,” he says.

He adds that the tour operator hired old, poor quality buses to transport them to other sights. When it was time to return home things got even worse. Because the operator was trying to save money, the group of pilgrims were told to leave the hotel at midnight, forcing the coach party to head to the airport several hours early.

“We were waiting three hours in the Jeddah streets in the coach with no water or food, and nowhere to do the prayers,” Minhas says. “Our flights home included a 17-hour stopover in Beirut, for which we had been promised hotel rooms. But when we arrived they didn’t exist. We were forced to just wait in the airport where the shops would only take US dollars, and we had none, and no way of getting any. It was terrible.”

When he returned home and complained to the tour operator, Leicester-based Al Shafqat Hajj, he was offered £100 compensation – which he declined. A spokesman for the firm told Guardian Money that the company had since been taken over, and that the new owner had nothing to do with Minhas’s booking. He also said the firm no longer offered hajj trips. Leicester Trading Standards confirmed that it was investigating the firm, but would not comment any further.

Meanwhile, Pervez says he hopes that more pilgrims on the wrong end of terrible treatment will be emboldened to come forward and complain in the future.

“The hajj pilgrims travel in a large group of up to 300 or even more. The number of complainants that do come forward are part of a large number. If a couple of pilgrims do complain about the exploitation and frauds committed against them, it means all the others in the group also probably experienced the same exploitation. However, for some strange reason others do not come forward.”

* The name has been changed because of fears of reprisal

Anyone booking a flight-based hajj package should ensure that the travel company is Atol-protected by the Civil Aviation Authority. A legitimate Atol logo will have a four- or five-digit number and can be checked online at: www.caa.co.uk/checkanatol.

Atol – the Air Travel Organiser’s Licence – protection is a government-backed scheme and means that if your travel company collapses while you are in Saudi Arabia you will be repatriated at no further cost.

Never deal with an agent that won’t put everything in writing. Be clear what you are buying, and do an internet search of the firm before handing over any money. Do be wary of using middlemen or lone agents.

Try to insist on paying at least £100 of the cost using a credit card so you can then potentially gain section 75 protection in the event of something going wrong.