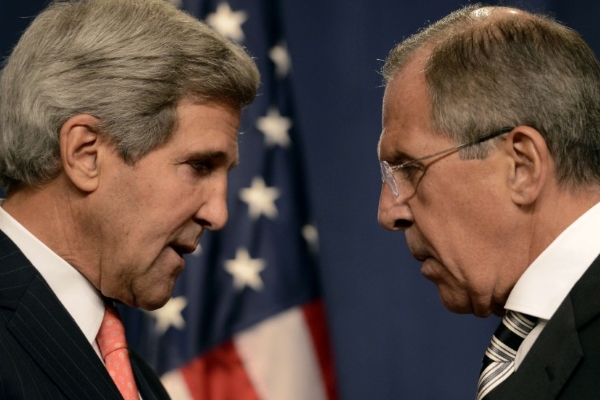 TOPSHOTS US Secretary of State John Kerry (L) speaks with Russian Foreign Minister Sergey Lavrov (R) before a press conference in Geneva on September 14, 2013 after they met for talks on Syria's chemical weapons. Washington and Moscow have agreed a deal to eliminate Syria's chemical weapons, Kerry said after talks with Lavrov. AFP PHOTO/PHILIPPE DESMAZESPHILIPPE DESMAZES/AFP/Getty Images

Secretary of State John Kerry says the U.S. is “on the verge” of suspending talks with Russia over Syria because of Moscow’s continued aerial bombardment of the Syrian city of Aleppo.

Hours after Russia vowed to continue its air strikes in Aleppo, Kerry said Thursday that bilaterial engagement with Russia over Syria is “irrational in the context of the kind of bombing taking place.”

“It is one of those moments where we are going to have to pursue other alternatives,” he said.

The United Nations described the plight of Aleppo as desperate, with one official saying, “Medical evacuations are urgently needed.” He said “probably hundreds” of people needed to be moved out of the war-wracked city, Syria’s largest, where about 250,000 people live in the area under attack.

The U.N. deputy envoy for Syria, Ramzy Ezzeldin Ramzy, said food stocks in the city are “running low,” with many bakeries closed and only 14,000 food rations remaining.

“Let me be clear, east Aleppo this minute is not at the edge of the precipice; it is well into its terrible descent into the pitiless and merciless abyss of a humanitarian catastrophe unlike any we have witnessed in Syria, with no access by the U.N. since 7 July,” he said.

The United States and the European Union are accusing Moscow of quashing diplomatic efforts to halt the fighting, a claim Russia rejected.

German Chancellor Angela Merkel and Turkish President Recep Tayyip Erdogan said Russia has a “special responsibility to calm violence and give a political process a chance” in Syria.

Kremlin spokesman Dmitry Peskov insisted Moscow still wants to reach a deal to renew the September 9 deal on a cessation in fighting; but, he said, “We have unfortunately taken note of the rather unconstructive character of the rhetoric from Washington over the past few days.”

Russia said it supports a 48-hour cease-fire in Aleppo, but not a longer truce proposed by the U.S.

Britain’s U.N. envoy, Matthew Rycroft, said the Russian proposal is “designed to sound good, but allow them to carry on their deadly bombing campaign.”

His comments came a day after Kerry told his Russian counterpart, Sergei Lavrov, that the U.S. is making preparations to suspend bilateral engagement with Russia on Syria, unless Moscow takes immediate steps to end the assault on Aleppo and restore the cessation of hostilities agreed to nearly three weeks ago.

“The secretary made clear the United States and its partners hold Russia responsible for this situation, including the use of incendiary and bunker buster bombs in an urban environment, a drastic escalation that puts civilians at great risk,” Kerry spokesman John Kirby said in a statement.

The two countries have tried at various times during Syria’s five-and-a-half-year conflict to use their influence on the opposing sides in order to push for peace talks and cease-fire agreements; but, as with the latest deal on Aleppo, those truces have broken down as the fighting continued.

Kirby also suggested Wednesday that Russia’s alliance with Assad’s military raised the threat of a terror attack back home.

The halt in fighting was also meant to allow for food and medical aid to reach people in Aleppo, where on Wednesday airstrikes hit the two largest hospitals in the rebel-held eastern part of the city.

Damage from the strikes temporarily knocked the hospitals out of service, further limiting medical care in a part of the city.