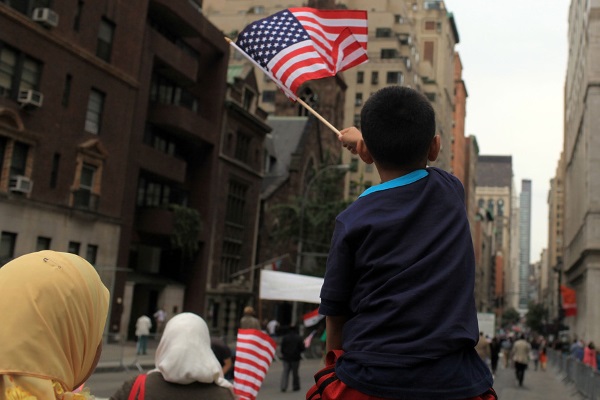 A new study shows that anti-Muslim crime in the United States last year surged to levels not seen since the attacks of Sept. 11, 2001, making Muslims the “most disdained” religious minority group in the country.

Official police reports from 20 states compiled by California State University at San Bernardino’s Center for the Study of Hate and Extremism show there were 196 anti-Muslim crimes in 2015, up from 110 incidents in 2014, an increase of 78 percent. The crimes in 2015 ranged from assault to murder to arson.

Hate crime directed at Arabs jumped by an even higher 219 percent.

Overall, hate crime in the United States rose by just 5 percent, from 4,139 incidents in 2014 to 4,347 in 2015. And while there were more anti-Jewish and anti-LGBT hate crimes, the increases in those categories were much smaller, according to the study.

Brian Levin, director of the Center for the Study of Hate and Extremism, who led the study, said the spike in anti-Muslim violence was fueled by a combination of prejudice, terrorism and political vitriol.

“Not only do we see wide swaths of anti-Muslim prejudice … but now Muslims are the most disdained major group in the United States and we have a socio-political movement that reinforces and amplifies it,” Levin said in an interview, referring to the anti-Muslim rhetoric by Republican presidential nominee Donald Trump and other American politicians.

With about 3.3 million people, Muslims represent roughly 1 percent of the U.S. population, but attacks on Muslims accounted for 4.5 percent of all hate crimes in 2015, Levin noted.

With the exception of 2015, hate crimes have trended down in recent years; yet even then, “the proportion of Muslim targets has gone up,” he added.

‘Tip of the iceberg’

Among the 20 states studied, several with large Muslim communities saw an increase in anti-Muslim violence, with New Jersey reporting a 250 percent rise, Texas registering a surge of 129 percent, California reporting a jump of 122 percent and Tennessee notching a 67 percent uptick. 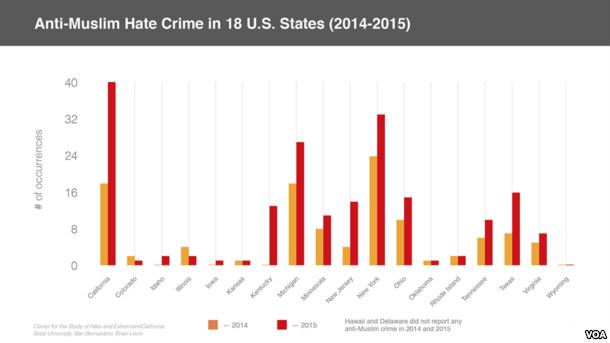 In California, the San Bernardino mass shooting by a Muslim couple in December led to a wave of anti-Muslim attacks. In Tennessee, shootings on two military installations in Chattanooga by a Muslim-American, along with a controversy surrounding mosque construction, touched off a crime spree aimed at Muslims.

Partial data provided by police departments show the upsurge in anti-Muslim hate crime has continued into this year.

“In each of those places, it looks like hate crimes have gone up,” Levin said. “Whether that will translate through the end of the year, we’ll see.”

The California State University’s findings come as Saturday’s bombings in New York and New Jersey blamed on an Afghan-American have touched off fears of a violent public backlash against Muslim Americans.

But while terrorist attacks can stoke anti-Muslim hate crime, political rhetoric can be just as powerful in inciting violence against the community — or checking it, Levin said.

His team looked at two major political statements over the past 15 years: President George W. Bush’s call for tolerance shortly after the 9/11 attacks, and Trump’s controversial announcement of a ban on Muslims entering the country.

While anti-Muslim violence soared after Sept. 11, Bush’s “Islam is Peace” speech at a Washington mosque led to a “precipitous decline” in attacks on Muslims, Levin said. By contrast, in the days after Trump’s Dec. 7, 2015, Muslim-ban speech, there was an 87 percent increase in anti-Muslim hate crime, he said.

“To put things in perspective, the average anti-Muslim hate crime per month for the preceding five years (before Trump’s speech) was 12.6,” he said.

Levin’s report is largely in line with other recent studies, but he and other experts were quick to note that hate crime studies vastly underestimate the problem.

The Bureau of Justice Statistics, for example, estimates the number of hate crime victims at between 200,000 and 300,000 a year, while a 2011 Pew Research survey showed that 6 percent of Muslim Americans had reported being threatened or harassed.

The study “may be the tip of the iceberg, but still it can tell you what’s underneath,” said James Nolan, a professor of sociology at West Virginia University and a former hate crime data analyst for the FBI.

The U.S. Department of Justice says it has aggressively prosecuted or provided support for state prosecutions of hate crimes targeting Muslims and other minority groups. However, only a fraction of these crimes get prosecuted as hate crimes, experts say.

That is because it is easier to prosecute a case based on bodily injury or property damage than to establish a religious motive.

“The idea of just recognizing it and reporting it and naming it and calling it what it is an initial first step,” Nolan said. “But then from that there should be more in terms of investigation, prosecution, prevention, all involving the government, the police and citizens, everyone.

“We should be talking about it more particularly at this time when we’re seeing a spike,” he said.