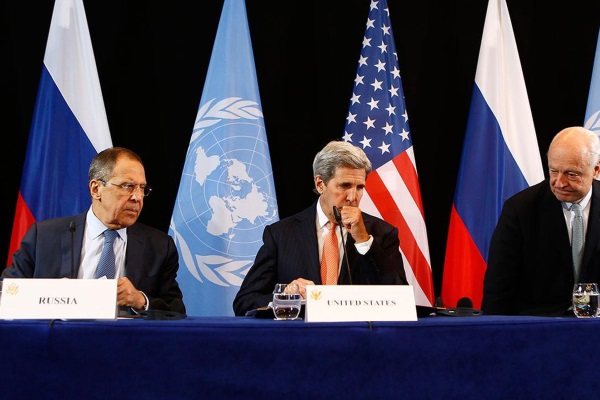 September 20, 2016 “Information Clearing House” – “SCF” – There are several sound reasons for concluding that the US-led air strike on the Syrian army base near Deir Ezzor last weekend was a deliberate act of murderous sabotage. One compelling reason is that the Pentagon and CIA knew they had to act in order to kill the ceasefire plan worked out by US Secretary of State John Kerry and Russian Foreign Minister Sergey Lavrov.

The compulsion to wreck the already shaky truce was due to the unbearable exposure that the ceasefire plan was shedding on American systematic involvement in the terrorist proxy war on Syria.

Not only that, but the tentative ceasefire was also exposing the elements within the US government responsible for driving the war effort. US Defense Secretary Ashton Carter – the head of the Pentagon – reportedly fought tooth and nail with Obama’s top diplomat John Kerry while the latter was trying to finalize the ceasefire plan with Russia’s Lavrov on the previous weekend of September 9 in Geneva.

While Sergey Lavrov and media reporters were reportedly kept waiting several hours for Kerry to finally emerge to sign off on the deal, the American foreign secretary was delayed by intense haggling in conference calls with Carter and other military chiefs back in Washington. Even days before Kerry’s diplomatic shuttle to Geneva, Carter was disparaging any prospective deal with Russia on a Syrian ceasefire.

It is well documented that both the Pentagon and the Central Intelligence Agency have been running clandestine programs for arming and training anti-government militants in Syria since the outset of the war in March 2011. Officially, Washington claims to be only supporting «moderate, vetted opposition». However, on occasion, Western media reports allude to the deeper sinister connections between the US military and terrorist groups when it has been reported that American weaponry «accidentally» finds its way into the hands of extremist jihadist networks.

This pretense by the US – and its other NATO and Arab allies – of supporting «moderate rebels» and of having no involvement with recognized terror groups like Al Nusra and Daesh (ISIS) was being exposed by the latest ceasefire.

It is conceivable that the diplomatic corps of the Obama administration, including President Barack Obama and his foreign emissary John Kerry, may be benighted about the full extent of America’s dirty war in Syria and its systematic connections to the terrorist brigades. Perhaps, this Obama flank is gullible and venal enough to believe in Washington’s propaganda of a dichotomy between «moderate rebels» and «terrorists».

Thus, when Kerry announced the ceasefire plan with Lavrov in Geneva on September 9, the American diplomat’s calls for the US-backed «moderate rebels» to separate themselves from the terror groups may have been made out a naive notion that such a distinction might exist. How else could we explain such a futile public appeal?

Not so, though, the Pentagon and CIA. The covert warmongers in the Pentagon and at Langley know the vile truth all along. That is, that all the militant groups in Syria are integrated into a terrorist front, albeit with a plethora of different names and seeming differences in commitment to al Qaeda Wahhabi ideology. The masters of war know that Washington is a sponsor of this terrorist front, along with its NATO and Arab allies.

Anyone with an informed knowledge about the origins of Al Qaeda from CIA authorship in Afghanistan during the 1980s would not be surprised in the slightest by such a systematic American role in the Syrian conflict.

This perspective reasonably explains why Carter. and the US military generally, were making conspicuous objections to Kerry’s ceasefire plan with Russia. They knew the ceasefire was not only infeasible because of the systematic links between the US and the terror groups, but also that a failing ceasefire would furthermore expose these systematic connections, and create wider public awareness about American complicity in the Syrian war.

And, as it transpired, the apprehensions of the Pentagon and the CIA terrorist handlers were indeed founded. Within days of the Kerry-Lavrov ceasefire being implemented on September 12, the following was undeniable: there was no separation of «moderates» and «terrorists». All militant groups were continuing to violate the nominal truce in the northern battleground city of Aleppo and in other locations across Syria.

The US and Western media then began venting about the Syrian «regime» and its Russian ally not delivering on giving humanitarian aid access to insurgent-held areas of eastern Aleppo. But that rhetorical gaming could not disguise the fact that the ceasefire was being breached by all the militant groups, which made it impossible for humanitarian aid convoys to enter Aleppo. Another factor played down by the Western media was that the Turkish government refused to coordinate with the Syrian authorities in the routing of UN truck convoys from the Turkish border into Aleppo. Given Turkey’s past documented involvement in using «humanitarian aid» as a cover for supplying weapons to insurgents, the vigilance demanded by Damascus is understandable.

The floundering ceasefire was thereby providing a withering world exposure of American terrorist complicity in Syria. The US lie about backing «moderates» as opposed to «terrorists» was being shown once and for all to be a cynical delusion. Evidently, US claims of supporting a «legitimate» opposition were seen for what they are – an utter sham. That leads to an even more damning conclusion that the US government is a sponsor of a terrorist proxy army in Syria for its criminal objective of regime change in that country. In theory at least, this disclosure warrants legal prosecution of Washington and its allies for the commission of war crimes against the state of Syria.

Given the grave stakes for American international standing that the ceasefire was endangering, it is reasonable to posit that a decision was taken by the Pentagon to sabotage. Hence, on September 17, American, British and Australian warplanes struck the Syrian Arab Army elite forces’ base near Deir Ezzor,  in eastern Syria, killing over 60 personnel and wounding nearly 100 more.

The US, Britain and Australia have since claimed that it was an accident, and that their aircraft were intending to attack Daesh militants in the area. The US-led coalition claims it will carry out an investigation into the air strike. As with many times before, such as when the US devastated a hospital in Afghanistan’s Kunduz killing more than 30 people last year, we can expect a cover-up.

Briefly, a few factors for doubting the US coalition’s claim of an accident are: why did the Daesh militants reportedly launch an offensive operation on the Syrian army base less than 10 minutes after it was struck by F-16s and A-10s? That suggests coordination between the coalition air forces and the terrorists on the ground.

Secondly, it defies credibility that sophisticated air power and surveillance could mistake an army base and adjacent air field containing hundreds of troops for ragtag guerrilla units.

Thirdly, as Russian military sources point out, the US coalition had previously not been active in that area over the past two years of flying operations. The Syrian army was known to be recently waging an effective campaign against Daesh around Deir Ezzor. That suggests that the US air power was being deployed to defend the terrorist units, as the Syrian and Russian governments were quick to claim after the US-led air strike on Deir Ezzor. That is consistent with the broader analysis of why and how the entire Syrian war has been fomented by Washington for regime change.

But perhaps the most telling factor in concluding that the US and its allies carried out the massacre at Deir Ezzor deliberately is the foregoing argument that the Pentagon and CIA war planners knew that the flawed ceasefire was exposing their terror tentacles in Syria. And certainly, if any US-Russian joint anti-Daesh operations were to take place as envisaged by the Kerry-Lavrov plan, then the charade would definitely be blown apart.

In that case, only one thing had to be done as a matter of necessity. The unwieldy, discomfiting ceasefire had to be killed off. And so the Pentagon decided to make a «mistake» at Deir Ezzor – a «mistake» that has gutted any minimal trust between the US and Russia, unleashing recriminations and a surge in ceasefire violations.

The American and Western media respond in the usual servile way to aid the cover-up. The massacre at Deir Ezzor is being largely ignored as a news story, with much more prominence given to a relatively minor bombing incident in New York City on the same weekend in which no-one was killed. Or, when reported on, the US media in particular have automatically accepted without question that the air strike was an accident. CNN also dismissed out of hand Syrian government claims of it being proof of American collusion with terrorists as «absurd». A claim that would otherwise seem fairly logical.

The New York Times had this gloss to paint over the air strike:

«The United States’ accidental bombing of Syrian troops over the weekend has put it on the defensive, undercutting American efforts to reduce violence in the civil war and open paths for humanitarian relief».

The American so-called newspaper-of-record then adds:

«The United States had thought that if a deal to ease hostilities in Syria, struck by Secretary of State John Kerry and his Russian counterpart in Geneva nine days ago, fell apart, it would reveal Russia’s duplicity in the war, in which Moscow has supported the Syrian president, Bashar al-Assad».

How ironic. According to The New York Times, the Americans anticipated that the ceasefire deal would reveal «Russia’s duplicity in the war». Maybe, they calculated that Russia and Syria would not abide by the cessation, which they very much did during the first week, showing discipline and commitment to finding a peaceful settlement.

Far from revealing Russia’s «duplicity», it is Washington that emerged as the culprit, as the Pentagon and CIA had feared all along because of their deep complicity with the terrorist proxies.

Killing the Syrian ceasefire was like the necessity to extinguish a spotlight that had suddenly come on and begun exposing the putrefaction and bloodied hands in America’s dirty war.