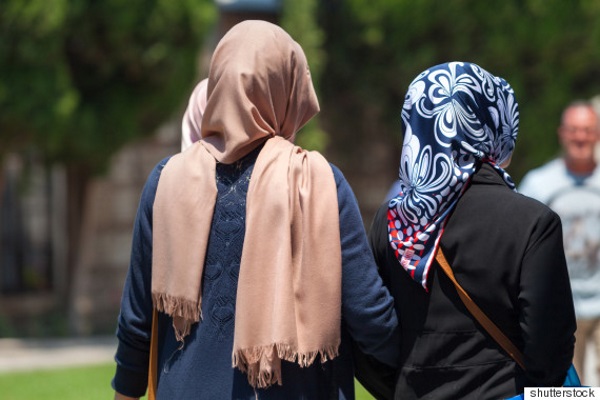 Last weekend, a 35-year-old woman was standing outside a Valentino store in Manhattan when, as she later told police, she felt heat on her left side. Her blouse was on fire, and a man stood nearby with a lighter in his hand. The woman, whose name has not been released by the New York Police Department, escaped with a hole in her blouse and no injuries. The NYPD is investigating the incident as a possible hate crime — the woman is Muslim, and she was wearing a hijab.

Almost every woman has an unsettling story about the difficulties of being a woman in public — whether it’s a stranger walking behind us too closely, verbal abuse, unwanted sexual advances or physical attacks. But for Muslim women, these isolated incidents of misogyny or violence have taken on an additional, ugly edge.

Amid a surge of anti-Muslim policy proposals (including presidential nominee Donald Trump’s idea to ban Muslims from entering the country), 2015 had the highest number of anti-Muslim hate crimes — five times the pre-9/11 rate. And although the venom of anti-Muslim sentiment is directed against both men and women, it is a particularly gendered crisis. Women bear the brunt of Islamophobic prejudice.

Comprehensive data on the effect of discrimination and hate crimes targeting Muslim women are hard to find. (The FBI does not track hate crimes by gender.) But studies suggest that women, particularly those who wear hijab or niqab, shoulder a unique burden. Because women who wear hijab and niqab are visible representations of our religion, they face a significant risk of exposure to discrimination, harassment and attacks.

According to one researcher, 69 percent of Muslim women who wore hijab reported at least one incident of discrimination; for those who did not wear hijab, it was 29 percent. Non-governmental organizations that track anti-Muslim incidents in various parts of the world report record numbers of hate crimes and violent incidents targeting Muslim women. In the Netherlands, 90 percent of victims reporting incidents of violence to Meld Islamofobie (Report Islamophobia) in 2015 were Muslim women; in France, the Collective Against Islamophobia reported that 81 percent of violent incidents involved Muslim women, as did more than half of incidents reported to Tell MAMA, an NGO in Britain. In each study, women who wore visible symbols of Islam such as a hijab or niqab were more likely to be targeted.

To Muslim women, these numbers aren’t abstract. They are real life. Just last weekend, days after my friend who wears hijab told me about being accosted in an airport bathroom and told to “go home where they wear those things” in front of her 7-year-old son, we reflected on two women who were attacked in New York City while pushing their babies in strollers. Their attacker expressed a similar sentiment — “Get the [expletive] out of America” — as she threw one stroller to the ground and tried to rip off the women’s hijabs.

Much of the focus as of late has been on France, even though Muslim women in the United States have endured prohibitions on hijab and niqab at work, in public spaces such as swimming pools or at school for decades. Muslim women have been fired or not hired, like Samantha Elauf, who took her case to the U.S. Supreme Court and won when Abercrombie and Fitch didn’t hire her because of her hijab. They’ve been arrested, like Itemid Al-Matar, who, while trying to catch a train, was tackled, detained and later subjected to a strip search by Chicago police. And they have been pushed out of the judicial process altogether, like in Michigan, which passed a court rule allowing judges to decide whether women in niqab can appear as witnesses.

Although Muslim men and women may both suffer from a presumption of guilt, women experience the additional presumption of victimhood. We’re seen simultaneously as recognizable representatives of a religion to be “feared” and passive targets of male dominance. In turn, our absurd status as both villains and victims drives not only discrimination, harassment and hate crimes, but promotes cynical policy proposals designed to help us, which actually are rooted in stereotypes and anti-Muslim bias.

Officials and news pundits have long used this tactic and the guise of “women’s rights” to promote anti-Muslim ideology. This thinly concealed bias is central to the arguments of the 30 French coastal towns that banned the burkini. In a truly head-scratching moment, Laurence Rossignol, the French government’s minister for women’s rights, defended the bans by stating: “The burkini is not some new line of swimwear; it is the beach version of the burqa and it has the same logic: hide women’s bodies in order to better control them.”

Lost in this statement is the irony that these laws reinforce exactly what the minister purports to loathe.

Similarly, in the United States, when Ibtihaj Muhammad became the first American Olympian to compete and medal while wearing hijab earlier this month, Rush Limbaugh tried to diminishthe historic moment by stating: “But why celebrate a woman wearing something that’s been forced on her by a religion, a religion run by men? . . . She may actively agree to do it, don’t misunderstand, but it’s a religion run by men that subjugates and subordinates women.”

Under heightened scrutiny and calls for vigilance, Muslim women have flocked to self-defense classes, some have contemplated removing their hijab to protect their families and others arewearing hijab to feel closer to faith during these uncertain times. I have experienced my own scare, when I was cornered by a man at a community dog park. After exchanging pleasantries, he snarled without warning or provocation: “Do you know what’s wrong with Muslims?”

He punctuated his rant with a finger in my face and a grab at my shoulder when I tried to glance or back away. Through clenched teeth, he ranted that Muslim men are rapists and terrorists, and that Muslim women are victims of their own oppression. I listened, silent calculations running through my head — I was alone in a dog park the size of one city block, and he was unpredictable and belligerent. Anything could have happened.

We have a long road ahead to realize full and equal rights, but it’s not Islam that holds us back. It’s pervasive prejudice and discrimination in all facets of our lives. Just as it’s intellectually dishonest to believe that four police officers forcing a Muslim woman to remove her burkini on a crowded beach is a sign of progress for women, it’s immoral to continue to allow anti-Muslim bias to close the doors of opportunity to us.

Discrimination in the name of women’s rights or religious tolerance is still discrimination — ask any Muslim woman, if only to finally include us in the conversation about us.

Rana Elmir is the deputy director of the ACLU of Michigan and lectures on issues related to Islamophobia, free speech and the intersection of race, faith and gender. Follow @elmirana