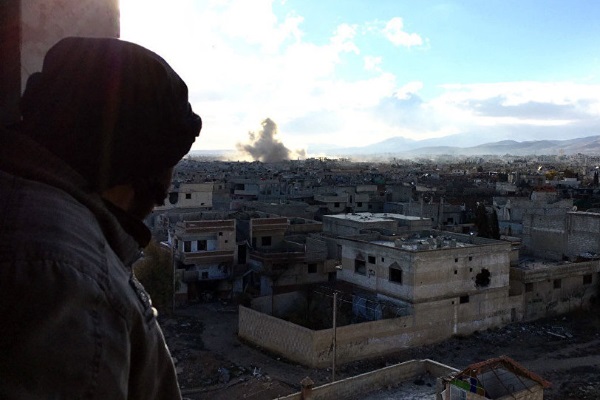 STATE DEPARTMENT – Hours after a sundown cease-fire went into effect in Syria, U.S. Secretary of State John Kerry declared it “may be the last chance” to preserve the country fractured by five years of civil war.

Amid reports of widespread calm, but with “some fighting here and there,” Kerry said Monday it is premature to make a determination on the U.S. and Russian brokered cease-fire’s effectiveness.

The agreement was announced early Saturday in Geneva by Kerry and Russian Foreign Minister Sergei Lavrov. It is supported by a number of other nations, including Iran, which is a backer of the Syrian government, and Turkey, which wants the removal of President Bashar al-Assad from power in Damascus.

Making an appeal from the State Department podium for all parties to observe the cessation of hostilities, Kerry predicted there will be challenges in the immediate days ahead for the cease-fire to hold, and clearing the way for significant humanitarian access to some of the hardest-hit areas to resume.

Seven days of relative calm under the agreement would lead to U.S.-Russian coordinated air strikes against Islamic State and the al-Nusra Front (which now calls itself Jabhat Fateh al-Sham), considered to be a branch of al-Qaida.

The agreement “makes no provision whatsoever for the U.S. and Russia to approve strikes by the Syrian regime, and this is not something we could ever envision doing,” said State Department spokesman John Kirby. “A primary purpose of this agreement, from our perspective, is to prevent the Syrian regime air force from flying or striking in any areas in which the opposition or Nusra are present.”

Kerry characterized the situation in Syria as the most complex conflict he has confronted in his decades of his service as a U.S. senator and America’s top diplomat, because “there are a bunch of wars going on” there.

Both the White House and the State Department on Monday characterized the agreement as one that places a lot of pressure on Russia, a longtime supporter of the Syrian president, to deliver.

Russia’s foreign ministry on Monday said humanitarian aid to Aleppo via the northern road of Castello was to start immediately.

The Syrian army command announced on state television that the truce was applied nationwide from 7 pm local time Monday (coinciding with the start of Eid al-Adha, a major Muslim holiday), but that it reserves the right to respond decisively to any violations of the cease-fire by armed groups.

“The Syrian state is determined to recover every area from the terrorists,” President Assad said in an interview aired by state media.

While some key insurgent leaders have criticized the agreement and expressed skepticism that it can succeed, they apparently are accepting it in hopes it eventually can lead to political talks to remove the defiant president.

Some rebel groups in Syria are concerned about the targeting of Nusra, which they see as an ally in defending insurgent held districts from a protracted Syrian government offensive in eastern Aleppo.

“The armed opposition in Syria now faces what is perhaps its biggest and most momentous decision since they chose to take up arms against the Assad regime in 2011,” says Charles Lister, an analyst at the Middle East Institute and author of the book “The Syrian Jihad.”

Lister adds that mainstream opposition forces “are extensively marbled or coupled” with Nusra forces on some of the front lines, from Deraa in the south to Damascus and throughout the northwest of the country.

The years of convict have left hundreds of thousands of people dead in Syria and created about 12 million refugees, one of the world’s worst humanitarian crises.