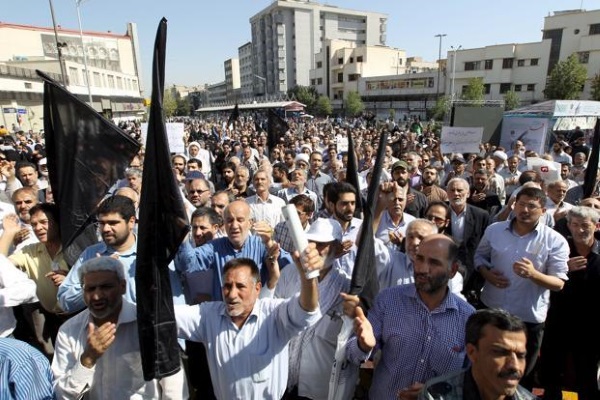 Iranians protest in Tehran the deaths of pilgrims in 2015.

Iran’s president has called on the Muslim world to “punish” Saudi Arabia for a stampede during the hajj last year that killed more than 2,400 people, while Iran’s supreme leader called for an international investigation of the incident.

The comments from President Hassan Rohani and Supreme Leader Ayatollah Ali Khamenei on September 7 were the latest salvos in an escalating war of words between Shi’ite-dominated Iran and Sunni-ruled Saudi Arabia.

The harsh verbal exchanges erupted this week as hundreds of thousands of Muslims arrived in the kingdom to participate in the annual hajj pilgrimage, which starts on September 10. The hajj is a ritual all able-bodied Muslims are required to carry out at least once in their life.

Iranian pilgrims are not allowed to take part in this year’s hajj, however, following the failure in May of negotiations over safety measures and other arrangements for Iranian pilgrims, aimed at preventing a recurrence of the fatal 2015 stampede, which killed more than 400 Iranians.

Rohani at a cabinet meeting on September 7 accused Saudi authorities of acting as “bystanders rather than rescuing” those caught in the disaster. He said countries should “punish the government of Saudi Arabia in order to have a real hajj.”

“The government of Saudi Arabia must be held accountable for this incident,” he said. “Unfortunately, this government has even refrained from a verbal apology to Muslims and Muslim countries.”

Meanwhile, Khamenei blasted the “incompetence” of the Saudi royal family as he met with families of victims and survivors of the Mina stampede.

He repeated his demands that Saudi Arabia’s ruling Al Saud family properly investigate the disaster or allow an international commission to do so, and that someone other than the Saudis be put in charge of administering the hajj.

“This incident proves once again that this cursed, evil family does not deserve to be in charge and manage the holy sites,” Khamenei said.

“If they are claiming that they are not guilty in the incident, they should let an Islamic international fact-finding delegation review and probe the case closely,” Khamenei said, adding that Saudi Arabia “should not shut people’s mouth with money.”

The September 24, 2015, stampede and crush of pilgrims killed at least 2,426 people, according to an Associated Press count based on state media reports and officials’ comments from 36 of the over 180 countries that sent citizens to the hajj.

The official Saudi toll of 769 people killed and 934 injured has not changed in nearly a year. The kingdom has never addressed the discrepancy, nor has it released any results of an investigation they promised to conduct over the disaster.

Iran had the highest death toll of any country, with 464 Iranian pilgrims killed.

On September 5, Khamenei accused Saudi officials of “murdering” hajj pilgrims who were killed in the stampede. Saudi’s grand mufti countered the next day by asserting that Iranians are “not Muslims.”

A coalition of Gulf nations on September 7 backed the Saudis in the dispute. The Saudi-led Gulf Cooperation Council issued a statement saying that Khamenei’s remarks and any such “false and outrageous accusations…should not be issued from the heart or the tongue of any Muslim.”

The council called the Iranian accusations “a desperate attempt to politicize” the hajj.

It is not the first time Iran and Saudi Arabia have come to blows over the pilgrimage. Iran boycotted the hajj for three years between 1988 and 1990 after clashes between Iranian pilgrims and Saudi police in 1987 left around 400 people dead.

With reporting by AP, IRNA, and AFP