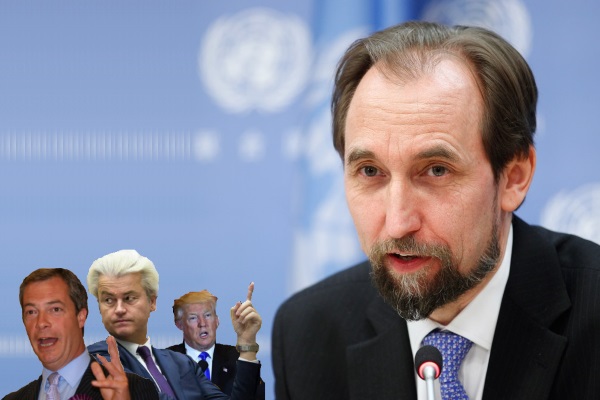 The U.N.’s human rights chief says populist politicians like Dutch nationalist Geert Wilders and U.S. presidential candidate Donald Trump are using fear and the promise of a world that has never existed in order to try to gain appeal.

Zeid Ra’ad al-Hussein said Monday in The Hague that their reliance on “half-truths and oversimplification” is a communication tactic Islamic State uses in its propaganda.

“The formula is simple: make people, already nervous, feel terrible, and then emphasize it’s all because of a group, lying within, foreign and menacing,” he said. “Then make your target audience feel good by offering up what is a fantasy to them, but a horrendous injustice to others.”

Zeid directed his comments at Wilders, who in late August put out a manifesto that included calls for a Dutch ban on immigrants from Muslim countries, closing mosques and Islamic schools and outlawing the Quran.

Wilders responded by calling Zeid an idiot and the U.N. itself “grotesque.”

Zeid called for people to “speak out and up,” saying that Wilders’ words draw little reaction today but would have “created a worldwide furor” a decade ago.