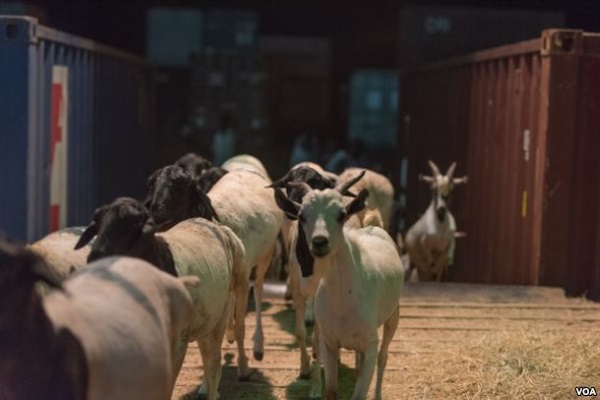 BERBERA, SOMALILAND — Every year, the breakaway republic of Somaliland, in east Africa, exports millions of livestock to Saudi Arabia to feed the millions of Muslim faithful making the pilgrimage to Mecca.

From the hinterlands to the Somaliland capital, Hargeisa, millions of sheep and goats are on the move in the small Horn of Africa republic.

The animals are en route to Saudi Arabia for use as sacrificial offerings for millions of Muslims making the Islamic pilgrimage to Mecca known as the Hajj.

The livestock trade to the Middle East accounts for 60 percent of Somaliland’s gross domestic product and 70 percent of its jobs.

Some Muslims consider the black-headed sheep to have religious significance relating to the prophet Abraham.

He said he earns his livelihood from this livestock and that he feels he is supporting the Islamic community in having a good Hajj festival.

Once sold in the markets, the animals are trucked to the Red Sea port of Berbera, where they wait in quarantine for weeks receiving blood tests and vaccinations.

Government veterinarian Ali Mahamud Gulled said the Berbera quarantine holds over a million animals at the height of the Hajj.

“It’s very, very important we guarantee that no disease is carried and infected to the imported country … because then that will affect us economically, drastically. It could result in a ban of our livestock, so we make sure that each and every animal leaving here is free of diseases,” said Gulled.

After quarantine, the sheep and goats load onto ships holding between 20,000 and 120,000 animals. The animals are often loaded at night when the air is cooler.

Somaliland now faces competition from Sudan, Australia, and other countries who also export livestock to the Hajj.

Abdi Osman Haji, a researcher with the U.N. Food and Agriculture Organization, which supports the livestock sector, said Somaliland must modernize its industry to stay ahead.

“The market facilities are very dilapidated and they are not up to date … I am sure Somaliland cannot maintain its current position if we don’t improve the whole export value chain,” said Haji.

Haji said Somaliland lags behind in terms of treatment of the animals too.

“Animal welfare is not on the agenda here and that has to be introduced. Animals, when they are deported via ships and via trucks, they are not according to international standards. They should comply [with] animal welfare conditions,” said Haji.

Even so, the annual export of animals from Somaliland to Saudi Arabia remains vital for both countries.