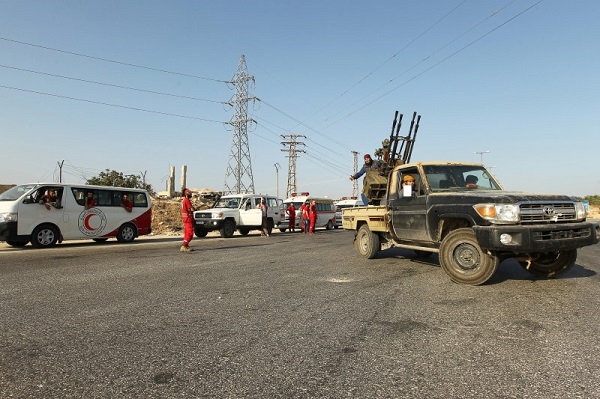 Civilians and rebels who were evacuated from the besieged Damascus suburb of Daraya, after an agreement reached on Thursday between rebels and Syria's army, arrive in the rebel-controlled city of Idlib August 27, 2016. REUTERS/Ammar Abdullah

AMMAN (Reuters) – Syrian President Bashar al-Assad is targeting the last pockets of resistance to his rule around Damascus and Homs, building on a tactic of siege and bombardment that brought him a victory last week but drew condemnation from the U.N.

As the Damascus suburb of Daraya, a potent symbol of the uprising against Assad, fell last week, the army began to put new pressure on the neighboring rebel enclave of Mouadamiya and on the besieged al-Waer district of the western city of Homs.

It is a strategy aimed at consolidating Assad’s control over government-held areas in a many-fronted civil war that has drawn in regional and global powers and inflamed sectarian hatred while killing over 250,000 and displacing 11 million.

“Daraya is a domino and after that others will fall,” said National Reconciliation Minister Ali Haidar on state television.

In nearby Mouadamiya the government has laid down an ultimatum: evacuate the fighters or face a military assault, according to rebels in the town.

In Homs, like Daraya an early center of the uprising, two days of heavy bombing forced rebels in al-Waer to recommence stalled talks on a similar deal, fighters there say.

The fall of Daraya, whose inhabitants were evacuated through a deal with the government, dealt a major psychological blow to the opposition while encouraging the army to believe it was in reach of subduing rebel bastions around the heavily fortified capital.

However, the U.N.’s aid chief, Stephen O’Brien, voiced “extreme concern” over the evacuation of Daraya, emphasizing the harsh conditions that had brought it to surrender, and warning that it set a dangerous precedent.

“Let us be clear, all sieges, a medieval tactic, must be lifted,” he said, adding: “What happened in Daraya should not be precedent-setting for other besieged areas in Syria.”

Before last year’s Russian intervention that helped turn the tide of war in Assad’s favor, the government had used local truces to advance the limited goal of pacifying hotspots including whole towns run by rebel-controlled councils.

It allowed the army and allied militias to escalate military campaigns against the large swathes of rural Syria that are held by an array of insurgent forces, but at the cost of allowing rebels to maintain enclaves around major cities.

Haidar, the reconciliation minister, added a warning in his television interview that rebel-held areas like Daraya could not “remain isolated cantons that pose a threat to the state”.

HELL AND A HEAP OF STONES

Daraya’s surrender came after two months of the heaviest bombing raids since it fell from government control in 2012, the start of an unrelenting siege that left civilians eating grass and cowering from incendiary barrel bombs, residents said.

Days before rebels agreed to evacuate to northwest Syria, army tanks came within meters of trapped residents and fighters, leaving them no option but to leave en masse.

“The tank and air shelling now reached the basements where our families had sheltered and huddled. They turned Daraya into hell and a heap of stones. We had no option,” said Abu Jamal, head of the largest insurgent group in Daraya, the Liwa Shuhada al-Islam.

Authorities moved quickly after the fall of Daraya to issue an ultimatum to the rebels of neighboring Muadamiya, which had been spared similar destruction thanks to a local truce, fighters there said.

Generals of the Syrian government’s elite Fourth Brigade, based nearby, laid out non-negotiable terms to insurgents to evacuate within 72 hours or be stormed, said a rebel and member of the suburb’s local council who asked not to be named.

The deal would involve 5,000 rebels handing over their heavy weapons and leaving Muadamiya with light arms to join insurgent factions elsewhere in Syria. Any who chose to sever their links to the rebellion could join a new police force in the suburb.

“It’s not possible to get something better. We were given the choice of a comprehensive settlement or face the consequences,” Ali Khalifa, a member of the rebel team negotiating with the army in Muadamiya, told Reuters.

For Muadamiya it represents the end of the uprising inside the town of 45,000.

“The portraits of Assad which we tore during the protests will now be back. This spells the end of our revolution here. I hope our sacrifices have not gone in vain,” said Kinan Natouf, a former engineering student from Muadamiya and fighter there.

In al-Waer, the army and rebels reached an agreement last year brokered by the U.N. involving the release of several thousand prisoners in return for an evacuation of the district’s remaining fighters.

As the last remaining insurgent stronghold in Homs, a city that was one of the first to rise against Assad, and which later became a symbol of resistance to his rule, it constitutes a valuable prize for the government.

However, that agreement broke down and in March the army tightened its blockade. It has now started to target the area with rocket bombardments and intense air strikes said Osama Abu Zeid, a pro-opposition media activist there.

“After Daraya the regime exploited what happened to dictate a new agreement that would oblige fighters and their families to leave within two weeks or flatten the neighbourhood,” said Osama Abu Zaid an activist on the ground. “We rejected that and now negotiations are back over the old terms of the UN deal,” he added.

For many of the rebel groups, fearful of the consequences of surrender when so many of the area’s inhabitants are wanted by the government for their part in the uprising, such a deal would be hard to accept.

“Surrendering al-Waer to the Assad regime will be tantamount to subjecting most of the civilians there to imprisonment, torture and death,” said a statement from the Armed Revolutionary Groups in al-Waer, a collection of rebel groups.

The defense of the capital, just northeast of Daraya and where the army’s best equipped forces are entrenched, is pivotal for the survival of Assad.

But unlike in the symbolically important but comparatively isolated rebel pockets in Daraya and Muadamiya, the insurgents in the capital’s Eastern Ghouta district of towns and farms hold a large, contiguous area under their own local administration.

That has stopped successive military campaigns by the army to recapture the rebel stronghold of Duma, the area’s largest urban center.

The outcome of the military advances in Daraya has now buoyed government hopes that a relentless bombing campaign could ultimately bring a similar result in that area, according to military analysts.

However, the opposition and aid agencies decry that policy as one of “starve or surrender”, saying it will make it harder in the long run to heal wounds of the civil war.

Already many within the opposition say the practice of evacuating Sunni Muslim fighters and their families from home towns where many sects once mixed was drawing new demographic frontiers that will only fuel the war’s sectarian overtones. Assad’s Alawite sect is more aligned with Shi’ite Muslims.

“These truces are paving the way for ethnic and political cleansing on an unprecedented scale,” said the head of the opposition’s Saudi-backed High Negotiations Committee (HNC) Riyad Hijab.

(Reporting by Suleiman Al-Khalidi; Additional reporting by John Davison in Beirut and Tom Miles in Geneva; Editing by Angus McDowall and Janet McBride)