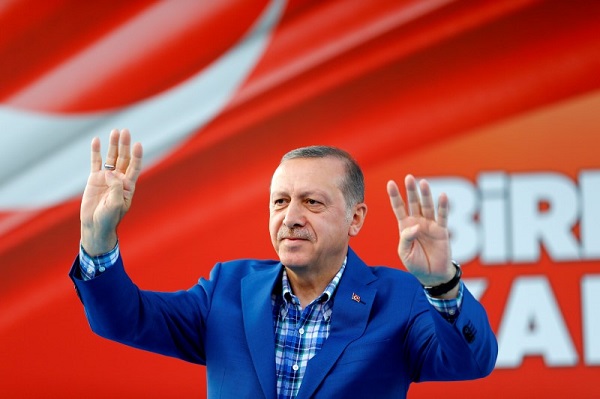 By: Lisa Barrington and Umit Bektas

BEIRUT/KARKAMIS, Turkey (Reuters) – Turkish-backed forces pushed deeper into northern Syria on Monday and drew a rebuke from NATO ally the United States, which said it was concerned the battle for territory had shifted away from targeting ISIS.

Since then, Turkish forces have mainly pushed into areas controlled by fighters aligned to the Syrian Democratic Forces (SDF), a coalition that encompasses the Kurdish YPG militia and which has been backed by Washington to fight the jihadists.

A group monitoring the tangled, five-year-old conflict in Syria said 41 people were killed by Turkish air strikes as Turkish forces pushed south on Sunday. Turkey denied there were civilian deaths, saying 25 Kurdish militants had been killed.

“We want to make clear that we find these clashes – in areas where ISIL is not located – unacceptable and a source of deep concern,” said Brett McGurk, U.S special envoy for the fight against ISIS, using an acronym for the jihadists.

“We call on all armed actors to stand down,” he wrote on Twitter, citing a U.S. Department of Defense statement.

Turkey, which is battling a Kurdish insurgency on its soil, has said its campaign has a dual goal of “cleansing” the region of ISIS and stopping Kurdish forces filling the void and extending the area they control near Turkey’s border.

That has put Ankara at odds with Washington and adds to tensions when Turkey is still reeling from last month’s failed coup, which it says Washington was too slow to condemn. The White House said President Barack Obama would meet Turkey’s Tayyip Erdogan on Sept. 4 ahead of a G20 summit in China.

“Turkey is determined to take steps to guarantee its citizens’ security at home and in neighboring countries,” Erdogan said in a message on the eve of Tuesday’s national Victory Day holiday. Operations would continue until all threats, including from the YPG, were removed, he said.

At a news conference on Monday with a visiting European official, Turkish European Affairs Minister Omer Celik said: “No one has the right to tell us which terrorist organization we can fight against.” He did not however mention the U.S. comments.

Turkish-backed forces advanced on Manbij, a city about 30 km (20 miles) south of Turkey’s border captured this month by the SDF with U.S. help. The Turkish military said it was also shifting operations westwards, which would take it into territory still under ISIS control.

The army destroyed eight ISIS targets with cross-border artillery fire after rockets from Syria hit the Turkish border town of Kilis, some 80 km (50 miles) to the west, a Turkish military source said.

The operations have left Turkey exposed to reprisal attacks by ISIS and Kurdish militants, both blamed for a string of bombings over the past year. The U.S. State Department said on Monday it continues to warn U.S. citizens of an increased threat from terrorist groups throughout Turkey.

SDF-aligned militia said they were reinforcing Manbij but insisted none of the troops in the region or the extra fighters heading to the city were from the Syrian Kurdish YPG militia.

Turkey has said its warplanes and artillery have bombarded positions held by the Kurdish YPG militia in recent days. It accuses the YPG of seeking to take territory where there has not traditionally been a strong Kurdish ethnic contingent.

“The YPG is engaged in ethnic cleansing, they are placing who they want to in those places,” Turkish Foreign Minister Mevlut Cavusoglu said in Ankara, demanding Kurdish forces withdraw east of the Euphrates river, a natural boundary with areas of eastern Syria under Kurdish control.

The YPG, a powerful Syrian Kurdish militia in the SDF that Washington sees as a reliable ally against jihadists in the Syrian conflict, have dismissed the Turkish allegation and say any of its forces west of the Euphrates have long since left.

“Turkey’s claims that it is fighting the YPG west of the Euphrates have no basis in truth and are merely flimsy pretexts to widen its occupation of Syrian land,” Redur Xelil, chief spokesman for the Syrian Kurdish YPG militia, told Reuters.

U.S. Pentagon spokesman Peter Cook said the United States had demanded the YPG return to the eastern side of the Euphrates but said Washington understood this had “largely occurred”.

Turkey has not spelled out if it wants to have a “buffer zone” in the region where it is fighting in north Syria. The region lies between two Kurdish-controlled cantons – one east of the Euphrates and the other to the west near the Mediterranean.

But Ankara fears that, if Kurdish militia create an unbroken swathe of territory, it could embolden the Kurdish militant PKK group which has fought a three-decade-long insurgency on Turkish soil to demand autonomy in Turkey’s southeast.

Turkish-backed forces say they seized a string of villages south of Syria’s Jarablus in a region controlled by groups aligned to the U.S.- and Kurdish-backed SDF. They also say they have taken a few settlements to the west in ISIS areas.