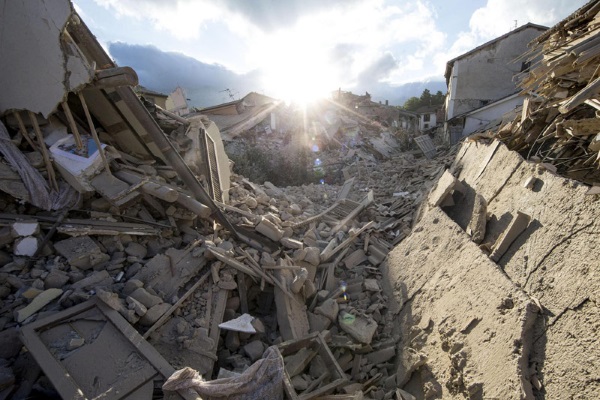 A recent devastating earthquake has claimed the lives of more than 260 Italians.

By: Mawlānā Muhammad Saleem Dhorat (May Allah protect him)

With recent earthquakes and the resulting carnage and losses, the point we need to consider is that although we may be well away from the epicenter, safe and sound, what do we need to do? Is it just another news headline and topic of conversation or does it hold deeper significance to us as Muslims? At this point it is worth pondering upon the fact that Rasūlullāh (Allāh’s peace be upon him) has mentioned that as Qiyāmah (judgment Day) nears, earthquakes will become more and more frequent.

We have seen this prophecy coming true as time has passed. In the past earthquakes were rare and therefore shocking. Nowadays, being much more common, much thought is not given towards them save when the earthquake causes a humanitarian disaster. In the past it was very difficult to imagine an era in which natural disasters would regularly hit the headlines. Yet here we are today, every so often there is news of an earthquake, tsunami or a natural disaster of some nature having struck some part of the world. There is frequent news of people dying, children becoming orphans, starvation, lack of food supplies, loss of basic amenities and homelessness.

For everything that happens in the world there is a cause. Causes are of two types: external and internal (worldly and spiritual). For example, when someone catches the flu or a cold, the external cause for this could have been stepping out in the cold inadequately dressed or standing in the rain for a long period of time. The internal cause could have been sins which had been perpetrated. Similarly, scientists explain the external cause of an earthquake to be the movement of tectonic plates or gaseous activity beneath the earth’s surface. Not refuting this, when we refer to the teachings of our Allāh and his beloved Prophet (Allāh’s peace be upon him) we find that the cause for earthquakes is the disobedience of Allāh, Most High, exceeding limits.

“Calamities have appeared on land and sea because of what the hands of men have earned, that Allāh may make them taste a part of what they have done, in order that they may turn back.” (Quran 30:41)

So, being that sins are the cause for such disasters, the primary thing we must do is repent. In such instances, when the Might and Power of Allāh, Most High, manifest themselves with such catastrophic effect, we should take heed from the warning. We should take this as a sign from Allāh, Most High, warning us of our sinful way; if we are to continue sinning then it is possible that He may also send a calamity upon us. Therefore, the first thing that we should do is accept that such catastrophes are due to my disobedience and then make tawbah (repentance) and istighfār (seeking forgiveness) with sincerity.

Remember, in this calamity others have suffered and we have been safeguarded; we should use this as a means of guidance for us. We should think to ourselves that we are not performing salāh (prayer), paying zakāh (poor due), etc; while we indulge in evils such as drugs, alcohol, adultery, oppression, backbiting, etc. What if due to my sins the earth splits open and I fall inside?

We should also spend in the path of Allāh, Most High. Rasūlullāh (Allāh’s peace be upon him) has said:

“Truly sadaqah (charity) extinguishes the anger of your Lord and protects against an evil death.” (At-Tirmidhī)

Spending in charity will not only bring reward from Allāh, Most High, for helping his creation but will also ensure that his anger, caused by our disobediences, will be cooled. Even though the earthquake may have struck in another country we must remember that the entire world is the same to Allāh, Most High. Borders and nationalities are man-made; to Allāh, Most High, we are all dwellers of the same earth. An earthquake in one part of the world is a sign of the anger of Allāh, Most High. And such anger is not necessarily confined to only those who were directly affected. So we too must do our bit to try and avert the anger by repenting and then assisting the afflicted through du‘ā and financial help.

Finally, we should also use this opportunity to ponder upon the Day of Reckoning. If an earthquake lasting around a minute can cause such devastation, then what will be the earthquake of the Last Hour be like? That earthquake will be so severe that not only will tall buildings collapse, but the sun will lose its brightness, mountains will become rubble, and this entire world will come to an end.

“O mankind, fear your Lord. Indeed, the quake of the (destined) Hour is something terrible. The day you will see it, every suckling female will forget that which she suckles, and every female having pregnancy shall abort her foetus, and you will see people as if they are drunk, while they are not drunk, but Allāh’s torment is (so) severe.” (Quran 22:1-2)

“When the earth will be jolted with a terrible jolt; and the mountains will be crumbled a thorough crumbling, until they will become dust, scattered in the air.” (Quran 56:4-6)

On the occurrence of this devastating disaster, our appeal is for everyone to repent and turn towards Allāh, Most High, spend in the path of Allāh, Most High, through charity and ponder upon the last day and make this earthquake a wake-up call for us.