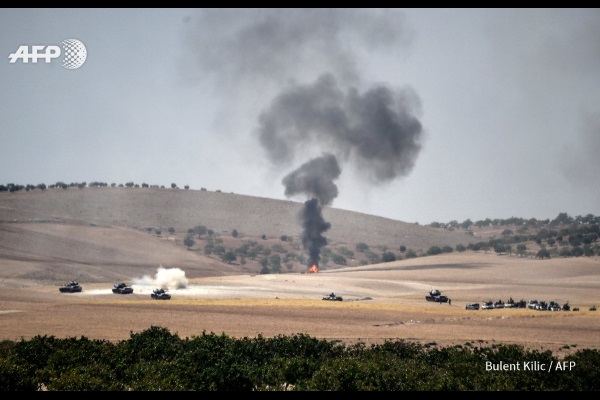 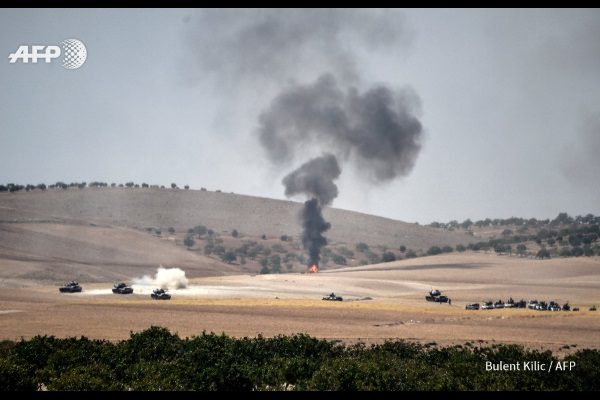 Turkish tanks, supported by Syrian opposition rebels, have stormed across the border into northern Syria, within hours seizing the town of Jarablus that ISIS jihadists had controlled since 2014.

It was the first time since ISIS has claimed a caliphate straddling parts of Iraq and Syria two years ago that it had given up territory within hours after fighting began for control of a town.

The lightning quick offensive, which Ankara said was aimed at clearing ISIS militants and Syrian Kurds from the border region, was Turkey’s most significant involvement so far in the five-year Syrian conflict.

American warplanes, A-10s and F-16s, launched airstrikes in support of Turkish and Syrian opposition operations against ISIS targets in Jarablus. “We want to help the Turks get ISIL off the border,” one official said, using an acronym for ISIS.

About 1,500 Syrian opposition fighters joined the cross-border operation. In a pre-dawn start to the fighting, Turkey fired artillery shells at ISIS targets, with Turkish and U.S. fighter jets hitting IS strongholds near Jarablus, with the rebels first capturing the nearby IS-held village of Kaklijeh.

Turkish President Recep Tayyip Erdogan said the offensive was in response to a series of attacks in Turkey, including the suicide bombing of a Kurdish wedding party near the border last weekend that killed 54 people. He said the goal was to end threats from “terror” groups, ISIS jihadists and U.S.-backed Syrian Kurdish militia linked to Turkey’s outlawed Kurdish rebels.

But Turkey’s targeting of the Syrian Kurds could put it on track for a confrontation with U.S. military operations in Syria. Washington considers the Kurdish rebels in Syria to be the most effective fighters against ISIS jihadists, even as Ankara has waged a three-decade fight against Kurds who are seeking an autonomous state in southeastern Turkey.

Vice President Joe Biden, who met Wednesday with top officials in Ankara, told a news conference the U.S.-backed Kurdish rebels must remain east of the Euphrates River in Syria, keeping the forces far from Turkey’s border.

“They cannot, will not and under no circumstances get American support if they do not keep that commitment. Period,” Biden said.

Syria’s Foreign Ministry condemned Turkey’s actions as a violation of its sovereignty.

Russia’s Foreign Ministry expressed deep concern about the operation, especially Turkey’s targeting of Kurdish militia fighters. It said that Turkey, by targeting both ISIS militants and Syrian Kurds, could further inflame the Syrian civil war, leading to “flare-ups of inter-ethnic tensions between Kurds and Arabs.”

Wednesday’s operation came a day after Foreign Minister Mevlut Cavusoglu said Turkey would give “every kind” of support to fighting ISIS in the area around Jarablus. On Monday, the government vowed to “cleanse” ISIS following the wedding suicide bombing in nearby Gaziantep.

ISIS controlled a long stretch of the Turkey-Syria border in early 2015, but Kurdish fighters have regained a large portion of the territory, particularly to the east of Jarablus.

Denying the militants access to the border cuts off a potential route for supplies and bringing in fighters, but Turkey has been wary of those gains being accompanied by the Kurds expanding their control in northern Syria.