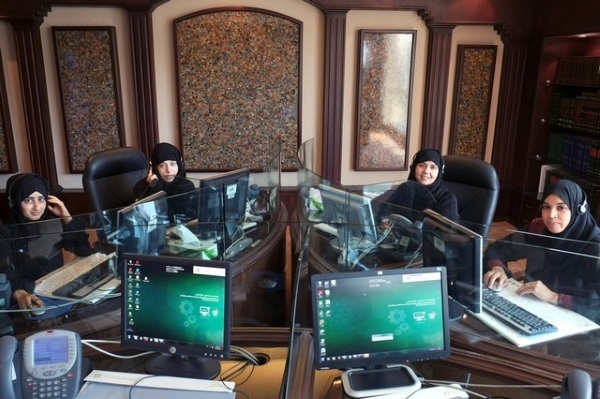 Sheikha Naeema lifts her glass to take a sip of water, but the large grey telephone on her desk blinks again, red and insistent. It is only 9am and she has already spoken to 11 callers. The woman on the other end of the line is in distress.

“Peace be upon you, blessings be upon you,” Sheikha Naeema says in a soothing tone. The woman tells her she has given birth twice and that both babies were stillborn. Now she is pregnant again. Her doctor has said the foetus is showing signs of severe complications and will probably die. The woman wants to know if Islam will permit her to have an abortion. After clarifying a few other details, Sheikha Naeema issues a fatwa. “If the foetus is severely ill and will not survive, you may have an abortion,” she tells the woman. “You must take advice from your physician, he will guide you. Religion does not conflict with medicine.”

She explains that abortion is allowed under certain circumstances: within 120 days, or 17 weeks after conception if doctors believe the baby has life-threatening defects. The fatwa – a non-binding religious ruling – is justified on the basis of a hadith, a saying attributed to the Prophet Muhammad, which states that at 120 days a baby is given a soul, or spirit. When Sheikha Naeema finishes the call, she swivels in the office chair and makes a note. “Normally it’s quiet on Thursday mornings,” she says.

We are in the small, cramped office of the fatwa hotline on the eighth floor of the General Authority of Islamic Affairs and Endowments in Abu Dhabi, better known by its Arabic acronym, the Awqaf. Abu Dhabi’s dial-a-fatwa hotline is run from a nondescript government building next to a supermarket along a busy stretch of road that leads to the pale turquoise waters of the Persian Gulf. Beyond the metal detector, polite receptionists direct visitors. A Bangladeshi employee in a pinstriped waistcoat pours coffee from a slender pot for visitors waiting in the lobby. A painting of Sheikh Zayed bin Sultan Al Nahyan, the late president and founder of the United Arab Emirates (UAE), hangs from a wall on the first-floor landing. He is kneeling in prayer and wearing oversized, aviator-style sunglasses. Awqaf hums with quiet bureaucracy and the whir of air conditioning as religious scholars in long white robes and keffiyehs wander in and out of glass-walled offices carrying papers and heavy books. A trace of rose incense mingles with the cold air.

In the hotline’s office, the air conditioning is cranked to sub-Arctic iciness. The room is small, the desks crammed together; soon, the scholars will move to a larger, purpose-built office a few kilometres away. For eight hours a day, five days a week, Sheikha Naeema and two female colleagues field queries from women, and sometimes men, from all sorts of backgrounds: rich and poor, young and old, devout and doubtful. They help them navigate elaborate moral and ethical rules and restrictions governing all areas of an observant Muslim’s life.

The iftaa, as the fatwa centre is called in Arabic, is the only one in the Middle East where a team of highly qualified women has been hired by the state to issue religious rulings. The women work across the hall from their male counterparts, 47 muftis who do the same job. The large white sign in the hall outside their office states the Awqaf’s mission as “promoting social awareness and progress according to the tolerant teachings of Islam that recognise the current realities and understand the future challenges”. The key word is “tolerant”.

On this particular morning the queries range from, “Are men and women allowed to work together in an office?” (yes) to “Can I fast during Ramadan if I have my period?” (no). The sheikha’s tone is matter of fact and professional. The next caller asks, “If I have noises coming from my vagina during prayer, does it nullify the prayer?”

“It is not flatulence, so no, your prayer is fine,” Sheikha Naeema tells the caller delicately. “This problem is common to many women who have given birth.”

When she hangs up the phone, she tightens the black shayla scarf around her head, framing her direct gaze and wry expression. Her colleague, Sheikha Radia, hands her a cup of coffee.

“There are no strange questions any more, we have heard everything,” she says. The women smile and shrug.

A highly respected legal scholar from Morocco, Sheikha Naeema, who is in her early 40s, has been working at the fatwa centre for eight years. On my first visit, her fingernails are dyed orange with henna and she wears the long black abaya gown commonly worn by women in the Gulf states.

The women at the fatwa hotline are attempting to redress a gender imbalance in the religious sphere. Religious life in UAE, as in the rest of the Middle East, is dominated by men. Male imams preach sermons. Religious space is also a male domain: when the call to prayer sounds five times a day (sung by a man), it is men who hurry to the mosque. Women are encouraged to pray at home. And, inevitably, female scholars are rare.

“We know it is unusual to hear a woman referred to as a muftiya, or sheikha, because this job is usually for men, but it is important women have someone they can turn to for help,” Sheikha Radia says. “When we communicate with another woman, we understand how she thinks.”

Sheikha Radia and Sheikha Naeema struggle to keep up with the volume of queries: up to 200 calls, text messages and emails every day, nearly always from women. The hotline has been such a success that six young Emirati women were sent to Morocco’s Mohammed V University at Agdal on state-funded scholarships to become muftiyas. English-speaking muftiyas are also being recruited, but that is proving tricky. “If you know someone who may be qualified, please let us know,” Sheikha Naeema says.

“We are trying to teach people about the real Islam,” says Mariam al Zaidi, 26, one of the graduates, adding that the state takes religious education for women seriously. “We all had full scholarships, we didn’t pay for anything. We had a car to take us to classes if we needed it, and accommodations were built. We were also given spending money.”

She says the government is simply reviving an ancient tradition. “All the women in the Prophet Muhammad’s life were teaching people, not just women but men, too, and explaining the faith.”

The hotline addresses the intimate preoccupations of Muslim women, unmediated by male professionals or clerics, and emboldened by the promise of anonymity. But the female scholars’ work is also part of a long-term government strategy to bring moderate, female scholarship to Islamic discourse at a time when religious fanaticism and sectarianism is on the rise across the Middle East. Jihadist groups such as Islamic State and the Taliban view the removal of women from public life as a critical component of a state ruled by their interpretation of sharia law.

Read more in this detailed article at The Guardian.