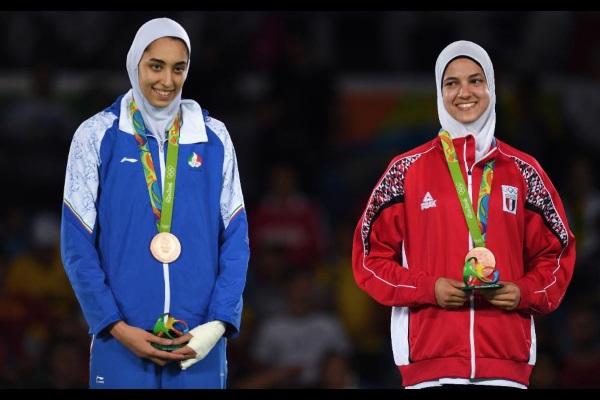 Young women from Muslim countries are a growing force in taekwondo and, at the Rio 2016 Olympic Games, that is being manifested in rising success.

The bronze medals for Kimia Alizadeh Zenoorin of the Islamic Republic of Iran and Hedaya Wahba of Egypt in the women’s -57kg on Thursday (18 August) showcases the talent that comes from North Africa and the Middle East.

The medals are the first for a female taekwondo player from either country and, in Alizadeh Zenoorin’s case, the first Olympic medal for a woman from Iran. It may not be the last.

“I hope that this medal can open the way for other girls (from Iran) to get to the Olympics and to get medals,” said 18-year-old Alizadeh Zenoorin, who was the Nanjing 2014 Youth Olympics champion.

“In the next Olympics I hope to get more medals, the best medal, gold medal, and I want to give this to Iranian girls.”

The specific uniform of taekwondo makes it possible for girls from more conservative societies to engage in the sport.

“Unlike in other sports, in taekwondo it is not a problem to wear a hijab, because we have a helmet. We also have body protectors and arms and legs are covered,” said Rahma Ben Ali of Tunisia, who, like Alizadeh Zenoorin, wears the traditional head scarf.

“We are all equal and respect each other’s religion.”

Wahba, who is another who competes wearing a hijab, said: “It is a good opportunity. You can do your own sport without having restrictions of what you are going to wear, that’s the best thing about it.”

Wiam Dislan of Morocco, who will contest the women’s +67kg on Saturday (20 August) and does not wear a hijab, sees other reasons for girls to take up taekwondo.

“The girls do it to become stronger and to be able to defend themselves. Taekwondo is not an aggressive sport, it helps women to take the right decision in the right moment. It is much more popular than judo (in Morocco) for example,” the 28-year-old said.

“Earlier, there were not so many girls doing taekwondo, but I think now we have more girls than boys doing it. Here in Rio we have only one boy, but two girls competing, that proves that there are a lot of girls practising taekwondo in Morocco.”