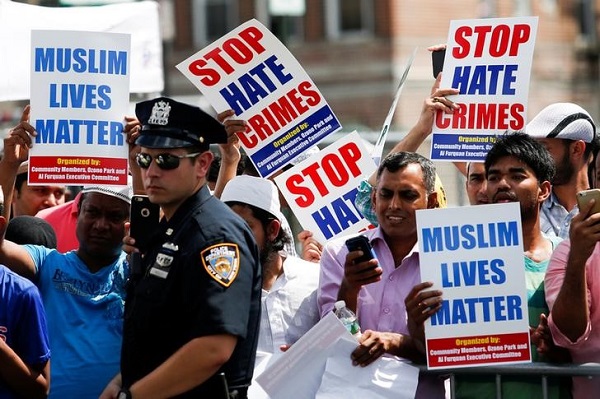 WASHINGTON – The cold-blooded killing of a New York imam and his assistant over the weekend has heightened Muslim American fears of rising violence against the 3.5 million-strong community.

While prosecutors have yet to uncover any religious motive in the shootings of Imam Maulama Akonjee and Thara Uddin, to many Muslims, the murders illustrate the increasingly violent face of Islamophobia in the United States.

“The perception among Muslim Americans is that it is potentially a hate crime,” said Engy Abdelkader, an adjunct professor at Georgetown University and author of a recent report on Islamophobia in America.

A surge in Islamophobia seen in recent years has been driven to a large extent by anti-Muslim political rhetoric and violent extremism, among other factors, Abdelkader said.

Abdelkader led a study by Georgetown’s Prince Alwaleed bin Talal Center for Muslim-Christian Understanding earlier this year showing hate crimes against Muslim Americans during the 2016 U.S. election cycle have soared to levels not seen since the attacks of September 11, 2001.

Between March 2015, when the first candidate entered the U.S. presidential race, and March 2016, there were 180 reported incidents of anti-Muslim violence, according to the study, “When Islamophobia Turns Violent.”

The figures are based on published news reports and incidents reported by the Council on American-Islamic Relations (CAIR), a Washington-based Muslim advocacy organization.

On average, the study recorded 18 incidents per month during the 12-month period, including 12 murders, 34 physical assaults, 49 verbal assaults or threats against individuals and institutions, 56 acts of vandalism or destruction of property, nine arsons, and eight shootings and bombings.

The actual number may be higher, as many incidents go unreported, Abdelkader said.

In the Georgetown study, the number of attacks against Muslims leveled off this year after soaring in November and December but “if you compare them to pre-election in March 2015, you’re still three to five times higher,” Abdelkader said.

Though Georgetown hasn’t released data for the period since April 1, Abdelkader says anecdotal evidence suggests “anti-Muslim acts and threats of violence” remain at the highest levels since 9/11.

The Huffington Post’s Islamophobia tracker, launched in January, tracks a broader range of Islamophobia but shows a steady uptick in cases of aggression against Muslims. Between January and July, the tracker has recorded 87 acts of aggression, a broad category that includes threats, physical assaults and vandalism of mosques.
Among incidents recorded in the past two months:

• On July 18, a note left at the home of a married couple in Tennessee read “I’m going to kill you Muslim bitches…I’m coming for your baby.”
• On July 11, two men stalked a hijab-wearing woman out of a Walmart in San Leandro, California, and “attacked her with blows to her head and body with eggs.”
• On June 29, a man approached a group of Muslim men wearing Islamic attire in Minneapolis, Minnesota, made anti-Islamic remarks before opening fire on them, wounding two of them.

Corey Saylor, director of CAIR’s department to monitor and combat Islamophobia, noted that anti-Muslim attacks have also grown more violent in the past two years.

“When you go back to 2010 and the controversy over the Ground Zero mosque what we were seeing was a pushback against the construction of a mosque,” Saylor said. “Now, pretty much since the first Charlie Hebdo attack, what you see is a change to more violent attacks.”

The sharp increase in anti-Muslim attacks has come during a period of public anxiety over several high profile terrorist attacks in Europe and the U.S. Indeed, three spikes in anti-Muslim violence recorded over the past year followed the Paris and San Bernardino attacks last year and the Orlando shooting in June.

In November, Georgetown recorded 35 acts or threats of violence against Muslims in America, up from eight the previous month, after terrorists killed 130 people in a series of coordinated attacks in Paris. In December, it documented a record 53 incidents, after a Muslim couple inspired by the Islamic State killed 14 people in San Bernardino, California. And in June, 2016, the month that saw the largest domestic terror attack since the 9/11 attacks, the Huffington Post documented 24 acts of aggression, the highest monthly figure since it started tracking Islamophobia in January.

“Our research shows that even in the first months of 2016, when anti-Muslim violence seemed to have leveled off, it actually still remained 3 to 5 times as high as pre-election levels,” Abdelkader said via email. “This suggests a positive relationship between anti-Muslim violence and Islamophobic political rhetoric.”

The Georgetown report catalogues a litany of Islamophobic statements made by Republican presidential candidates during the 2016 election cycle, from Senator Lindsey Graham and former New York governor George Pataki “talking tough about mosque surveillance and closures” to Ben Carson saying he opposed a Muslim serving as president of the United States.

The “first surge in Islamophobic political rhetoric,” according to the report, came in September when former Pennsylvania senator Rick Santorum told a conservative radio host: “There are serious questions about Islam and the spread of Islam and how it spreads…”

Though no terrorist attacks were reported in September, public concerns about the Syrian refugee crisis “quickly devolved into Islamophobic rhetoric about an influx of terrorists entering the United States under the guise of being refugees,” the report says.

The result was a ten-fold increase in anti-Muslim attacks: In September, Georgetown documented 10 incidents or threats of violence, including three murders, compared with only one incident recorded in August.

The rhetoric escalated after the San Bernardino shooting, leading Donald Trump, the Republican presidential front-runner at the time and now the GOP nominee, to call for mosque closures and announce his controversial ban on Muslims entering the U.S. And it further heated up after the Orlando shooting when Trump said he’d ban all immigration from regions of the world with a history of terrorism.

Trump “escalated anti-Muslim vitriol in the wake of the terrorist attacks in Paris, France, in November 2015 rather than urge calm and international unity,” the report says.

But Brian Levin, who directs California State University’s Center for the Study of Hate and Extremism and tracks hate crimes, said “actual hate crime spikes do correlate to events.”

“The spread of prejudice often is a process that includes a variety of factors that certainly include but are not only limited to political rhetoric,” he said. “The negative stereotypes about Muslims are present but seem to combust into what is called reactive/defensive hate crimes from a catalytic event,” he said.