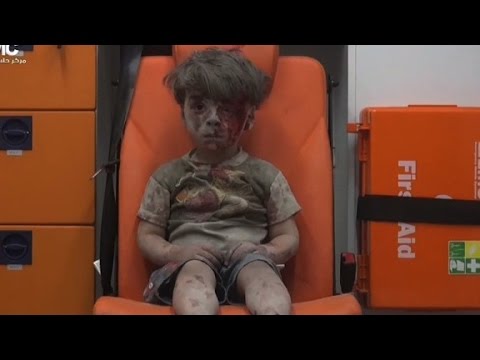 A photograph of a bloodied young boy injured in a devastating airstrike in the Syrian city of Aleppo has captured the attention of people around the world as it circulates through traditional and social media channels.

Syrian opposition activists released a photo of a boy, looking stunned and exhausted as he sat in an orange chair of an ambulance with his face covered with blood and dust.

A physician in Aleppo, Osama Abu al-Ezz, identified the boy Thursday as 5-year-old Omran Dagneesh. He confirmed the boy was taken to a hospital known as “M10” Wednesday night and treated for head wounds before being discharged.

The boy was injured after an airstrike on the rebel-held neighborhood of Qaterji. A doctor at M10 said that eight people were killed in the airstrike, including five children.

Shortly after the strike, rescue workers and journalists began pulling victims from the debris. Among the rescuers was photojournalist Mahmoud Raslan, who took the iconic photo that captured the barbarity of the war in Syria.

Meanwhile, Russia has indicated that it is ready to support a 48-hour cease-fire in Aleppo in order to allow aid deliveries.

The U.N. envoy for Syria, Staffan de Mistura, has expressed frustration at the continuing violence preventing the delivery of humanitarian aid to those in need of help in the country’s many besieged areas.

He cut short a weekly meeting of the U.N. aid delivery task force Thursday in Geneva and said the group would reconvene next week with what he hoped would be discussion of action instead of “wishes or promises.”

He said achieving a 48-hour ceasefire would require big efforts by the United States, Russia and other countries with influence on Syria’s warring parties..

The conflict in Syria has raged for more than five years with the United Nations estimating more than 400,000 deaths and 13.5 million in need of aid. There have been several rounds of U.N.-mediated peace talks as well as regular discussions among diplomats about how to end the fighting, but no real progress has been made.

Lisa Schlein contributed to this report from Geneva