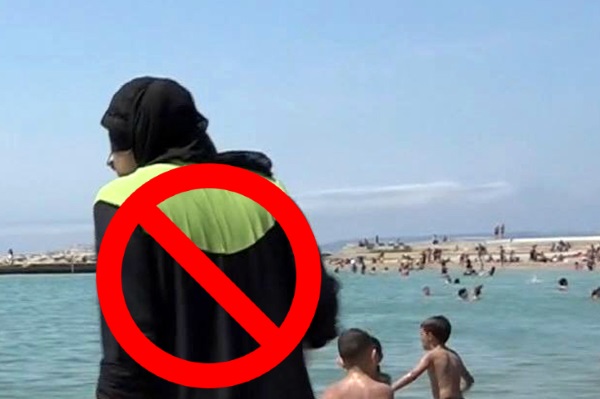 FILE - In this Aug.4 2016 file photo made from video, Nissrine Samali, 20, gets into the sea wearing traditional Islamic dress, in Marseille, southern France. The French resort of Cannes has banned full-body, head-covering swimsuits worn by some Muslim women from its beaches, citing security concerns. A City Hall official said the ordinance, in effect for August, could apply to burkini-style swimsuits. (AP Photo, File)

It has been a bad few months for women – the attack on Channel 4 news anchor Fatima Manji by Kelvin MacKenzie for fronting the news on the day of the Nice attacks, followed by Donald Trump’s accusation that a dead Muslim American Serviceman’s mother isn’t “allowed to speak”. The announcement of the opening of a “fellatio café” in London in December 2016 servicing only men’s desires with coffee on the side was a similarly shocking moment, in addition to the TUC’s report on sexual harassment of women in the workplace, the investigation by the Women and Equalities Committee on the prejudices faced by Muslim women in employment.

This week, we heard the announcement by David Lisnard, Mayor of Cannes, that he is prohibiting access to the beach to anyone wearing inappropriate swimwear that does not “respect good customs and secularism”.

I had my face in my palms wondering if it could get any worse, and then Thierry Migoule, head of Municipal Services in Cannes stated that the rule is about banning “ostentatious clothing which refers to an allegiance to terrorist movements which are at war with us”.

Choosing to conflate a cultural and religiously inspired mode of bathing attire – which women choose to wear to make them feel safe from the sexual gaze of society while partaking in a very ordinary pasttime – with a terrorist group is a convenient “othering” of fellow citizens in times of national crisis.

The greatest causalities of Isis have been Muslims, and the banning of the burkini illustrates the extent to which France’s fundamentalist secularism is singling out the most visible and vulnerable group in society for blame.

Since when did wearing a burkini, in most cases a loose fitting nylon version of a wetsuit, become an act of allegiance to terrorist movements? Do Marks & Spencer or House of Fraser know that their attempt to raise profits and exploit a gap in the over-saturated clothing market is selling and promoting allegiance to Isis?

What is it about French secularism’s blindspot to its own racism and misogyny? The obsession to the point of fetishism with Muslim women’s mode of dress and covering curtails the most basic of human rights – that of self-determination and freedom of expression. As Arundhati Roy so eloquently put it, coercing a woman out of the burka instead of enabling her to choose is an act of violence, humiliation and cultural imperialism. Instead of extending the hand of fraternité, Mr Lisnard and his supporters are excluding Muslims, if not pushing them into the arms of radicalisers.

Such policies and acts of discrimination are examples of how Islamophobia is more likely to manifest itself in a gendered way which targets and affects women uniquely, adding to their misogynistic oppression and religious victimisation.

Similar to the Everyday Sexism project, my friends and I sit and exchange stories of incidents that we would post on our imaginary “Everyday Islamophobia” blog. These daily micro, and at times macro, aggressions indicate the extent to which misogynistic Islamophobia has become normalised in Western discourse and public debate.

What hurts the most is the silence of fellow mainstream and “western” feminists whose voices would have a significant impact on how these issues are framed and articulated. Their solidarity would mean so much to their Muslim sisters across Europe and the world.

The Mayor of Cannes and the extremist secularism in parts of France and Europe are, in this instance, the other side of the coin to Saudi Arabia, Iran or, dare I say it, Daesh in Raqqa, where enforcement and regulation of women’s clothing and bodies is mandated by men acting in the name of the state.

It is when we cease to treat women’s bodies as commodities, using them to score points in ideological wars which strip them of control over their own bodies and deny them the right to choice that we honour liberté, egalité and fraternité.

Huda Jawad is an advisor at the Centre for Academic Shi’a Studies.