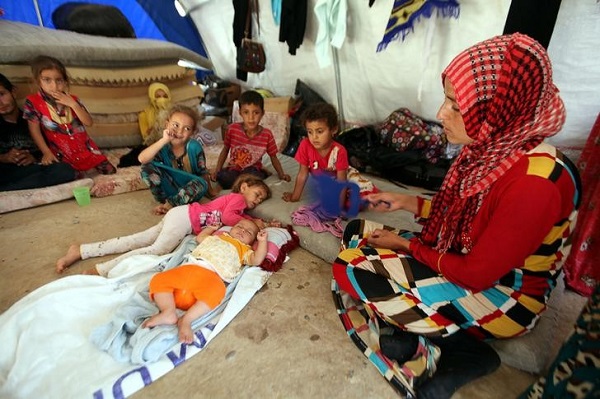 Displaced Iraqi people, who fled from Mosul due to Islamic State violence, gather at a refugee camp in the Makhmour area near Mosul, Iraq, August 6, 2016. REUTERS/Azad Lashkaril

Around 40 percent also said they wanted their borders shut to refugees, with support for such a move highest in Turkey, India and Hungary.

The Ipsos MORI survey of attitudes towards refugees and immigration polled more than 16,000 people in 22 countries including Britain, Germany, Italy, Japan and Russia.

The survey comes as Europe grapples with its worst migration crisis since World War Two. More than one million people, including many fleeing conflict in Syria, Iraq and Afghanistan, made their way to Europe last year.

The U.N. refugee agency (UNHCR) said that while security threats were a concern, people fleeing persecution or conflict needed to be protected.

“Like in any population, there are people who are criminals and the law should be applied to them. Nobody is above the law, whether you are a refugee or not,” UNHCR spokesman William Spindler told the Thomson Reuters Foundation.

“But we should not forget that the vast majority of refugees are law-abiding and we should not demonize them or see them all as criminals and terrorists because that’s not the case.”

Last month, Islamic State claimed responsibility for two attacks in Germany – an axe attack by a 17-year-old Afghan refugee and a suicide bombing by a Syrian refugee which injured about 20 people.

A Syrian refugee was also arrested in July after killing a pregnant woman with a machete in Germany, though police said it did not appear linked to terrorism.

On Tuesday, German police arrested another Syrian refugee after receiving a tip-off that he was planning a possible Islamist-motivated attack.

Respondents in nearly all the countries surveyed believed immigration had risen over the past five years. Almost half  thought immigration had had a negative effect on their country, with only 40 percent confident refugees would successfully integrate.

Despite the refugee crisis in Europe, head of Ipsos MORI’s Social Research Institute Bobby Duffy said attitudes towards refugees have not changed much since 2011.

“There has not been a wholesale negative shift in attitudes … across the 22 (countries) as a whole, attitudes have remained fairly stable over the last five years,” Duffy said in a statement.

Spindler said the majority of people understand the plight of refugees and the protection they are entitled to.

“Most people in the world also believe that people who are fleeing persecution should be protected and they want their countries to keep their borders open to them.”