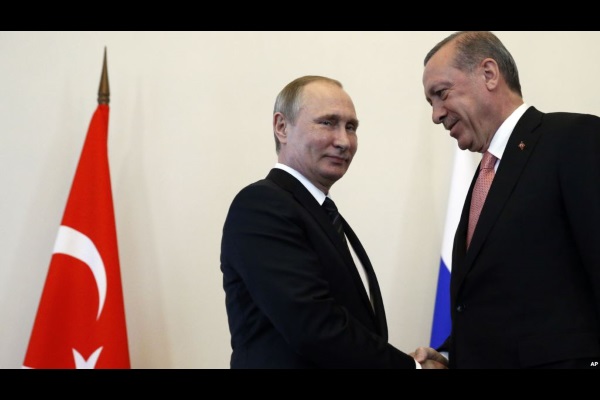 MOSCOW – Russia and Turkey are taking unprecedented steps to directly coordinate actions in Syria after a rapprochement between their presidents and despite disagreeing over support for Damascus.

The level of cooperation in the five-year civil war was made possible after Turkish President Recep Tayyip Erdogan reconciled face to face Tuesday with Russian President Vladimir Putin in St. Petersburg.

Putin announced that Russia would begin rolling back sanctions and restart important energy projects such as a stalled nuclear plant, which would be Turkey’s first, and the Turkish Stream gas pipeline from southern Russia to the Black Sea.

Russian officials said trade with Turkey could be fully restored by the end of the year.

On the sticking point of Syria, Turkish media reports said a newly formed joint committee would meet for the first time Thursday in Russia. The committee consists of intelligence, military and diplomatic representatives from Russia and Turkey.

The Hurriyet Daily News reports the Turkish and Russian militaries also agreed to set up a direct military line to prevent any future incidents between the two sides in Syrian airspace.

But while military communications are easily established, political analysts are questioning the extent of cooperation between the two sides that is possible in Syria.

Russia’s military is fighting alongside President Bashar al-Assad’s forces while Turkey is supplying rebel groups battling to remove Assad from power, a stated goal of Ankara and its Western allies.

“I think until now they have no clear decision because it’s clear that their interests are colliding in Syria,” said Alexander Golts, a Moscow-based independent military analyst and visiting researcher at Uppsula University in Sweden.

“In fact, Erdogan, Putin, the same day leaders met in St. Petersburg, Russian government sent to Duma (Russian parliament) the agreement which permits Russian armed forces to be in Syria as long as they want. So, it means that Russia will participate (in) this cruel civil war for a long period,” Golts said.

“And, now it’s obvious that (the) Russian goal is support of Assad, which is totally unacceptable or was unacceptable for Erdogan,” he added.

But the change in attitude by Erdogan toward Putin could signal an appetite for compromise on Syria and to demonstrate he has options amid tensions with his Western allies as well as back home in Turkey.

“I think that Erdogan needs Russia more than Putin needs Turkey, and Erdogan has not reached the goals he had in mind when he spoiled the relations with Russia,” said Ishat Saetov, director of the Modern Turkey Studies Center in Moscow. “On one hand, he wanted to be closer to the West, to show that he is on their side.

“On the other hand, he did not expect that the deterioration of political relations with Russia would bring along economic sanctions in such a severe manner as Russia did: loss of more than 4 million tourists made quite a blow on the economy,” Saetov said.

“But the heart of the matter is not actually the economy, but its effect on the voters,” he added. “Much depends on the positions of voters, whose incomes are falling and then his legitimacy is fading.”

Russia supported Erdogan after a July coup attempt, in contrast to U.S. and European concerns about the massive crackdown that followed.

Turkey accuses Fethullah Gulen, a cleric exiled in the U.S., of orchestrating the failed putsch and wants him extradited, which Washington has refused to do without evidence.

Ankara is also upset with the European Union over payments to stem migrants and refugees, mainly from Syria, and granting visa free status to Turks.

“Syria is one of the issues that Erdogan may trade upon,” Saetov said. “I think Erdogan is ready to concede in other issues, including Assad, and perhaps they’ll find the right wording.

Despite the warming ties with Russia, Turkish officials maintain that Assad must eventually step down and say relations with Moscow will not take the place of its Western allies.

Turkey and Russian relations plummeted in November when Turkey shot down a Russian bomber jet along its border with Syria, accusing it of violating Turkish airspace. Russia denied crossing the border and called the act a planned provocation by supporters of terrorism.

Moscow retaliated with economic and diplomatic sanctions that lasted until late June when Erdogan apologized for the incident and Putin invited him for direct talks.