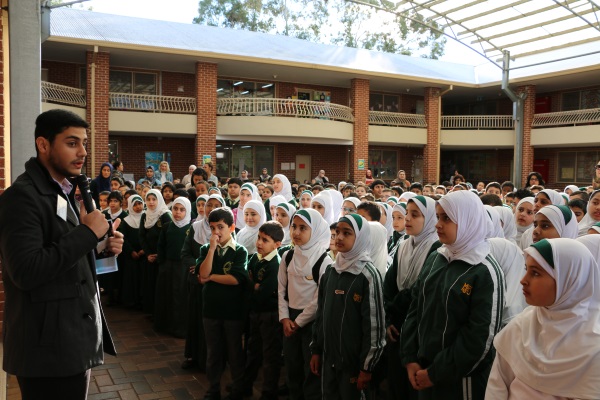 The Malek Fahd Islamic School (MFIS) in Greenacre and Hoxton Park raises funds every year for various charity projects. The fundraising efforts for 2016 were dedicated to the children of Syria and the building of water wells in Bangladesh, Afghanistan, and Kyrgyzstan.

On 22 July 2016, representatives from Human Appeal International Australia were invited to the MFIS in the Greenacre School’s assembly to hear about their fundraising and receive the cheque for money collected. A short while after this, a surprise visit by the Human Appeal mascot Orphan Hamoudi created a fun atmosphere for students. All students were excited to meet with him. Earlier in the year, approximately 350 students from Year 1, Year 2 and Year 6 participated in the fundraising events and collected funds for water wells in Bangladesh and for supporting orphans in Syria.

The MFIS in Hoxton Park (MFHP) had held a Pre-Ramadan charity fundraiser which consisted of an auction in which students, staff, and parents contributed funds to raise money for the construction of water wells in the three countries mentioned earlier. School students performed songs for parents and everyone enjoyed the delicious food. A short video of Human Appeal’s humanitarian work overseas was also shown. “It was a unique event in the history of MFHP and it received a very warm reception from the school community,” said the principal Mona Kassem.“This event helped to reinforce to students the importance of charity in the holy month of Ramadan”, she added.

Omar Al-Jamal, the Public Relations Manager, spoke on behalf of Human Appeal International Australia at the events. He reminded students to be grateful for all that they had and praised the students for their work in making the events possible. He also explained how the money raised would be used and how the school’s name will be shown on the water well plaque.

During the fundraising events students, parents, and teachers raised an impressive $7,284 for charity.

The staff members and school principals expressed their appreciation for the assistance provided by Human Appeal in helping the school achieve its goal of helping people in less fortunate countries.

Although Human Appeal is mainly focussed on fighting poverty and providing relief aid around the world, it is also actively and consistently involved within the local community including schools through the newly established Community Care division.