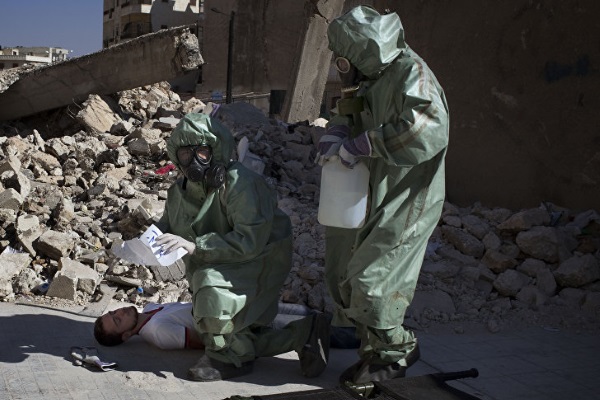 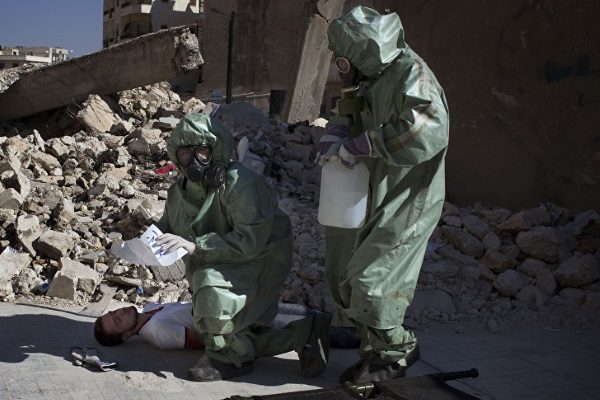 Russia is denying claims from Syrian rebels and human rights groups that it was behind a reported chlorine gas attack Tuesday in the same area where a Russian helicopter was shot down a day before, according to a Russian state media report.

Aid workers in Syria’s war-ravaged northwest said Tuesday that a helicopter dropped barrels of toxic gas on a town near the besieged city of Aleppo.

At least 30 people, mostly women and children were affected by the gas, which workers say was dropped overnight near the site where a Russian helicopter was downed hours earlier by rebel ground fire.  The extent of the chemical injuries was not immediately known.

By late Tuesday, there were conflicting reports about who launched the attack. Rebel fighters trying to break the Aleppo siege and government forces encircling the city blamed each other for using the poisonous gas, believed to be chlorine.

Physicians in the town of Saraqeb told reporters as many as five containers of chlorine hit neighborhoods there shortly before midnight. One physician told a reporter for al-Jazeera television he was certain the chemical was chlorine because the highly toxic agent has been used against the area in the past.

There was no immediate comment from the Syrian government, which is battling rebels for control of the area in what observers describe as some of the fiercest fighting in months.

However, the Syrian state news agency SANA later accused rebels of firing rockets armed with toxic gas into government-controlled areas of nearby Aleppo, killing at least five people. The report did not provide details.

The Russian helicopter downed Monday crashed about 15 kilometers from the site of the chemical attacks.

Fighting has raged in and near Aleppo for more than two months. Monitors from the Syrian Observatory of Human Rights report at least 6,000 people have been killed or wounded in the past 80 days.

The government of embattled Syrian President Bashar al-Assad has repeatedly been accused of attacking rebels with crude chemical bombs.

The SAMS report, released in March, documented 161 chemical attacks in Syria, and linked the vast majority of them and the resulting civilian casualties to the Assad government.