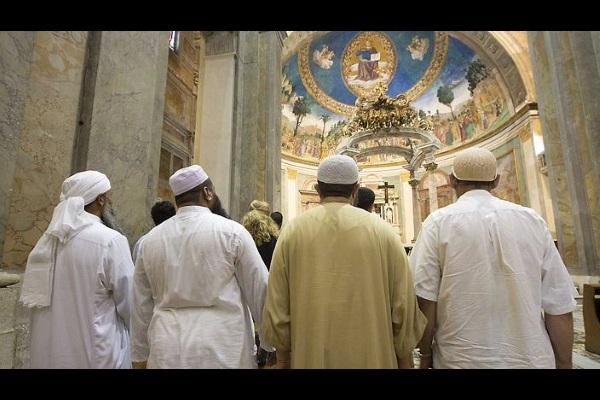 Hundreds of mourners gathered Tuesday in the cathedral of Rouen, in northern France, for the funeral mass held under tight security measures and presided over by Rouen’s Archbishop Dominique Lebrun.

“As brutal and unfair and horrible as Jacques’ death was, we have to look deep into our hearts to find the light,” Lebrun said.

Hamel was killed by two teenagers who slit his throat and took others hostage. The suspects were shot dead by police in the town of Saint-Etienne-du-Rouvray, about 6.5 kilometers south of Rouen.

ISIS claimed responsibility for the attack through a video released by the militant group.

On Sunday, Muslims attended Catholic masses in places of worship across France and Italy in a show of solidarity days after Hamel’s murder.

Archbishop Lebrun thanked the Muslim worshipers “in the name of all Christians,” adding that “in this way you are affirming that you reject death and violence in the name of God.”

A series of terrorist attacks in France, claimed by ISIS, has raised questions about the foreign funding of many mosques, in addition to tough questions about security failures across the country.

Cazeneuve said Monday that since December, authorities have shut down nearly 20 mosques and prayer halls considered to be preaching radical Islam.

There is no place in France for those who “call for and incite hatred in prayer halls or in mosques,” the minister said.