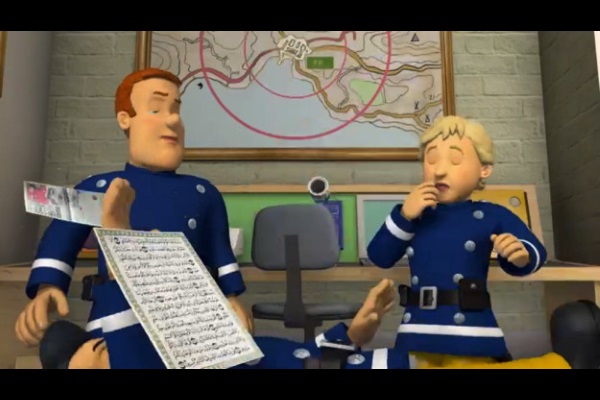 An episode of Fireman Sam in which a character appeared to tread on a page from the Qur’an has been removed from Channel 5’s streaming site, the TV network said.

In episode seven, series nine of the popular children’s animation, a character carrying a tray of hot drinks slips after tripping on some paper on the floor of the fire station. Several sheets fly into the air, one of which looks to be covered with Arabic script. HIT Entertainment, which produced the show, apologised “unreservedly” to viewers.

The company, which produces brands including Bob the Builder, Pingu and Thomas the Tank Engine, added that it had cut ties with the animation studio, which they blamed for the mistake.

A spokesperson said: “It has been brought to our attention that in an episode of Fireman Sam (Series 9, Episode 7), an image of the Qur’an is briefly depicted. The page was intended to show illegible text and we deeply regret this error. We sincerely apologise for any distress or offence it may have caused.

“We will no longer be working with the animation studio responsible for this mistake. In addition, we are taking immediate action to remove this episode from circulation and we are reviewing our content production procedures to ensure this never happens again. Again, we apologise unreservedly to our viewers.”

Miqdaad Versi, assistant secretary general of the Muslim Council, hit out at the error, tweeting:

Have no idea what went through the producers’ minds when they thought this was a good idea #baffled https://t.co/kjiZvZ3ZIG

The programme first aired on 8 October 2014 and was available to watch online at any time on the My 5 video on demand service. It was last shown by the broadcaster on Milkshake, its children’s breakfast show, on 28 June.

On Tuesday, the episode was pulled from Channel 5’s online streaming platform and the broadcaster said it had no plans to show it on TV.